15 Most Dedicated Fans in College Basketball

The Dawg Pound is one of the liveliest and most passionate student sections in the nation. Butler students love their team and will get behind them no matter what the score, which helps create an incredible atmosphere inside Hinkle Fieldhouse. Enjoy the atmosphere generated by the Dawg Pound when attending a Butler basketball game as it’s one of the best in the country. 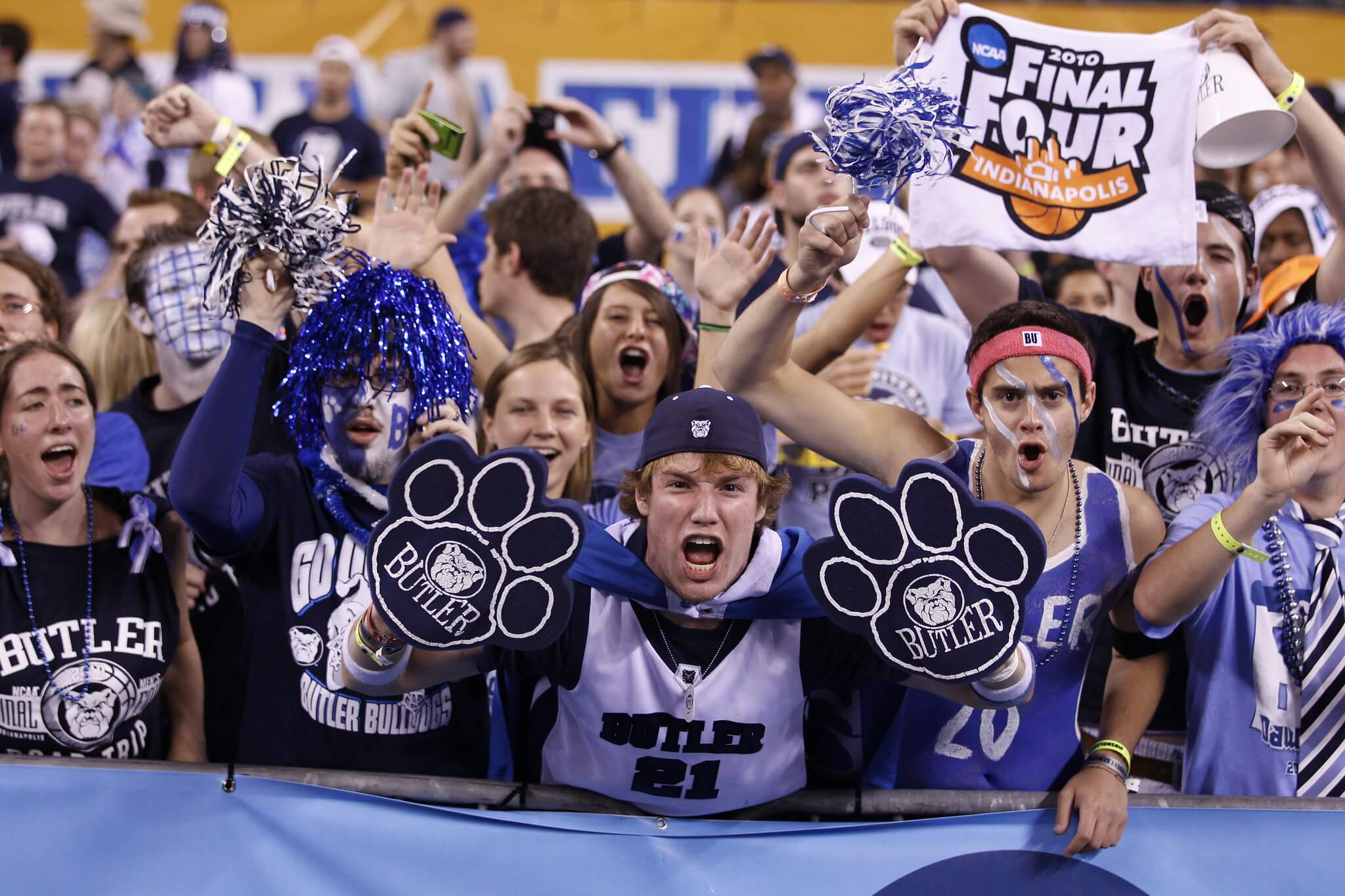 E.A. Diddle Arena is a great place to take in some college hoops thanks in large part to the atmosphere created by the fans. No matter where the Hilltoppers are in the standings, you’ll find a near capacity crowd making them arguably the best fan base in Conference USA. 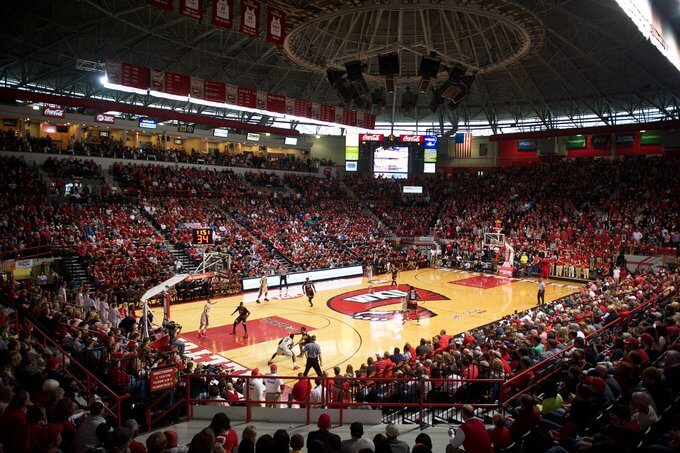 Huskies fans show up to every game in large numbers ready to cheer on their team to victory, so come prepared to cheer along with them or go home disappointed. 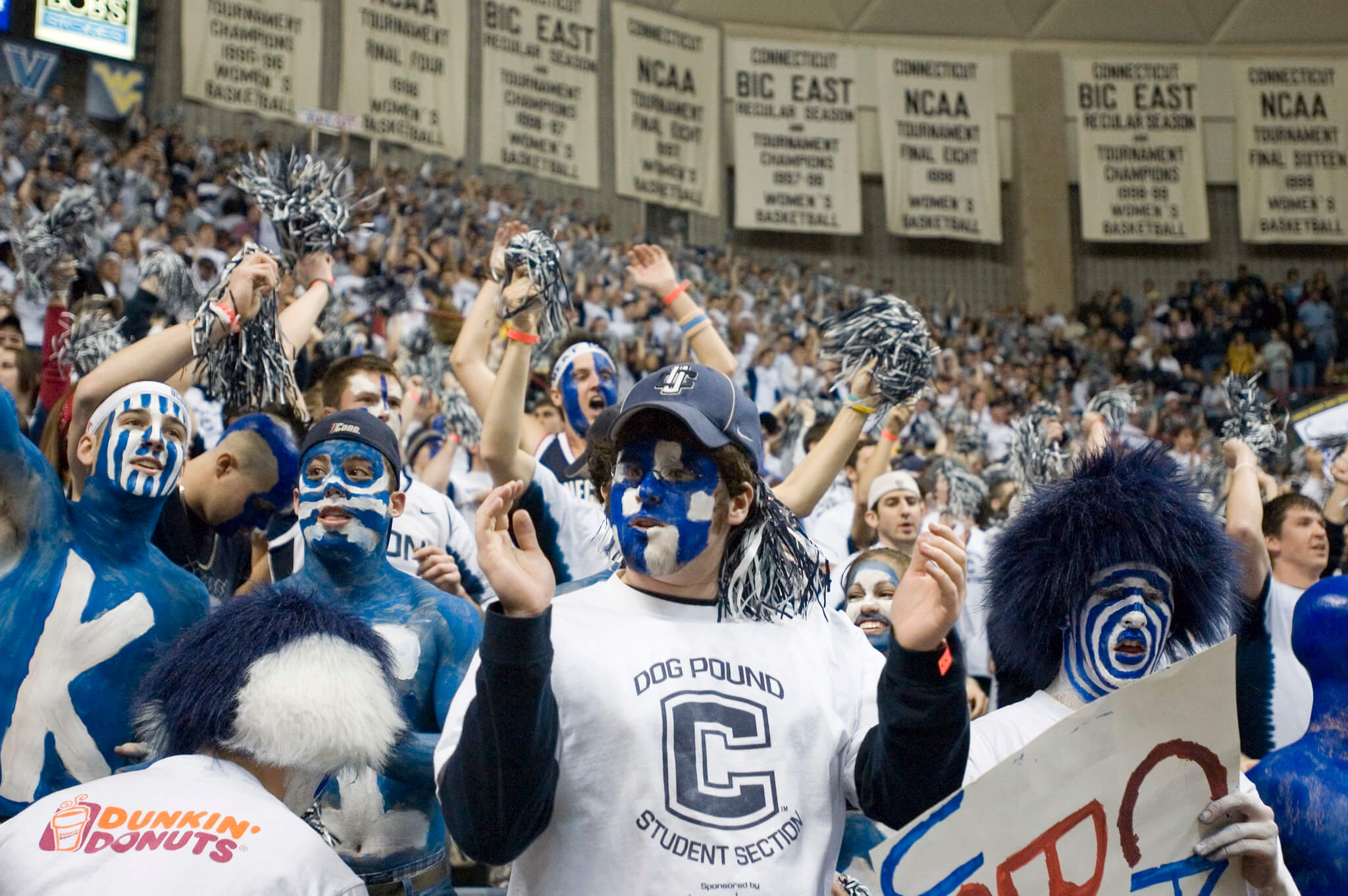 The McKale Center is home to an incredible student section name the Zona Zoo. The Zona Zoo is one of the loudest and rowdiest student sections in the country. They give opponents hell and lift up their team with their cheers and chants. They will spend the majority of the game standing and cheering their lungs out. 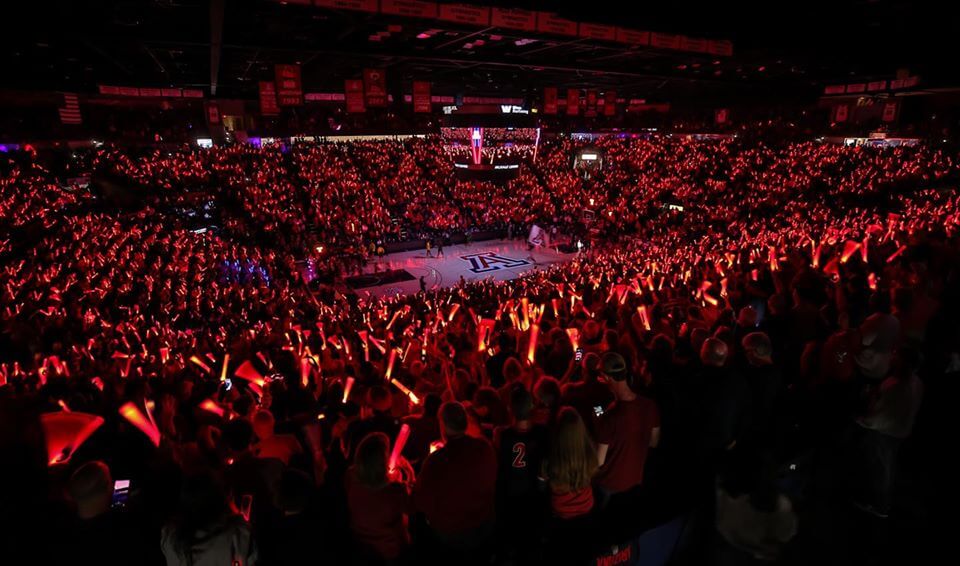 One thing that carries over from McArthur Court to the new MKA is the Pit Crew. The student section is filled with diehards who go all out to cheer on Oregon. The Pit Crew creates an excellent atmosphere throughout the game no matter what the score and does an outstanding job of getting in opponents’ heads as well. 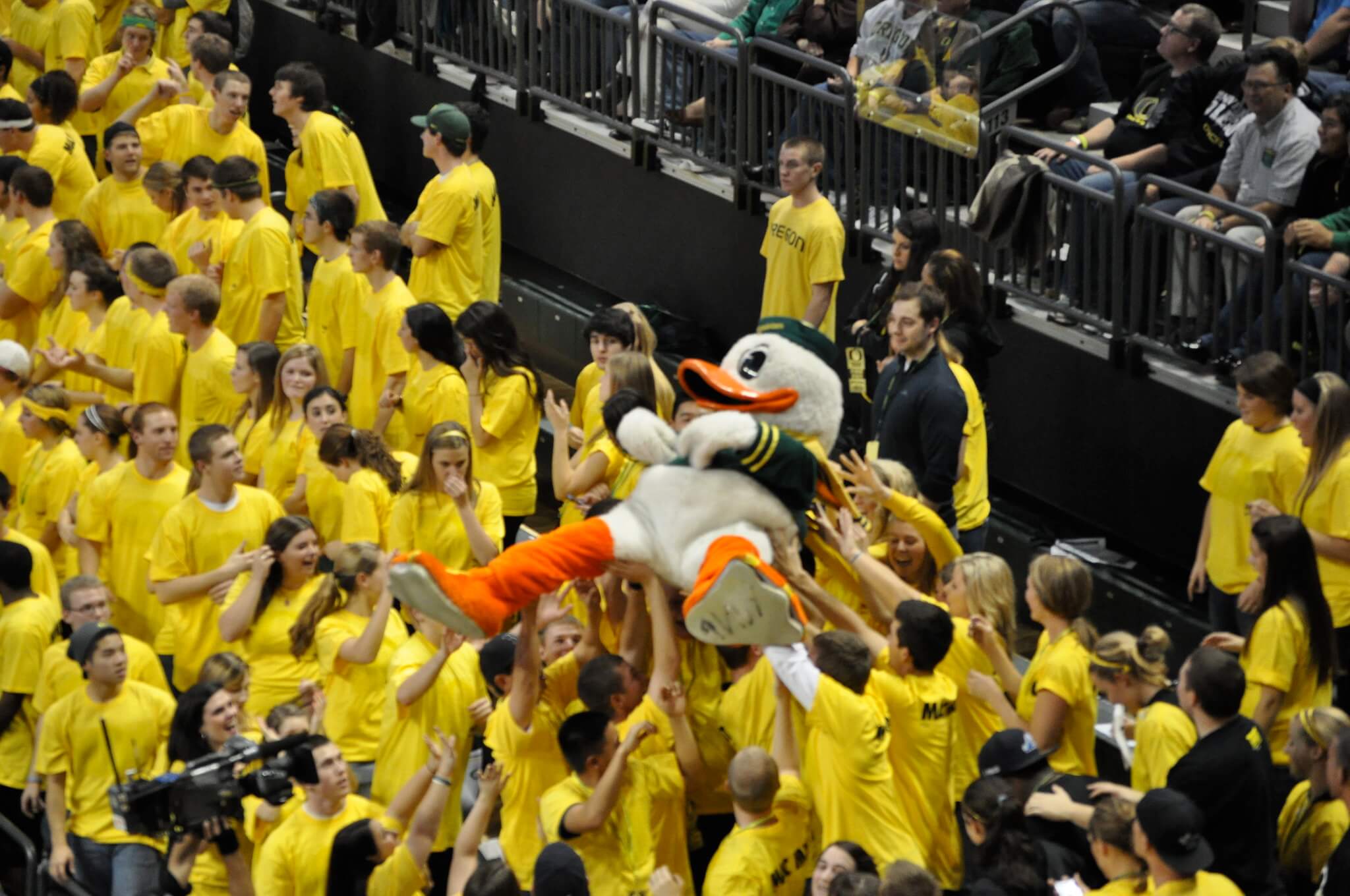 The fan support at Utah State is incredible. Whether it’s the students or alumni, everyone in the Smith Spectrum makes a ton of noise on game days. The student section, known as The Hurd, is especially loud and home to all of the Aggies’ famous cheers including their famous “Winning team, losing team” chant and “I believe that we will win.” The Hurd is also home to the one and only “Wild Bill,” so you know you’ll be in for a show when attending a Utah State basketball game. 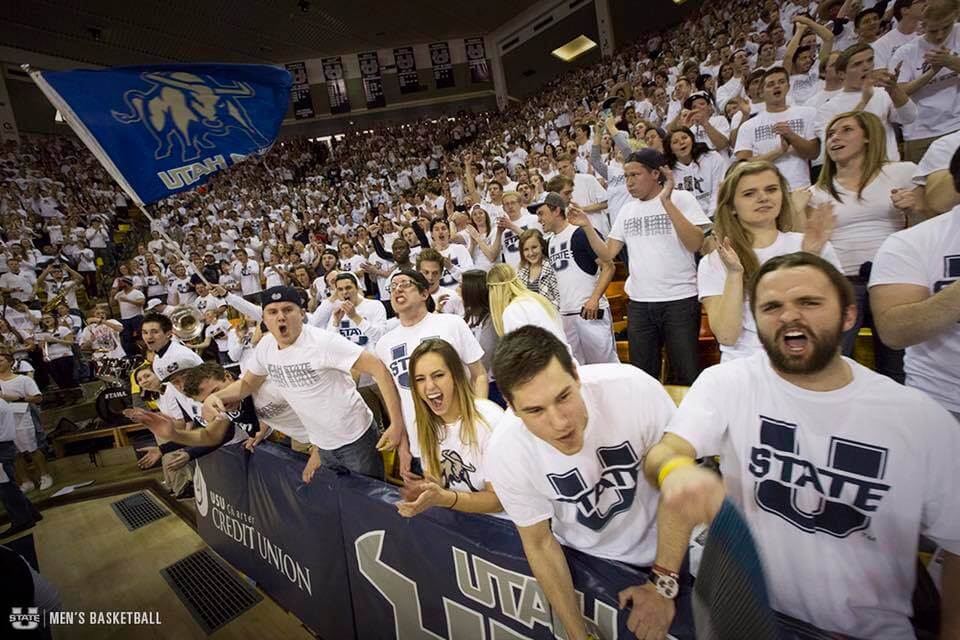 Despite being a relatively small school, the Marquette Golden Eagles have a large fan base that manages to do a good job of filling the Bradley Center. Golden Eagles fans cheer on their team loudly at Marquette games, and the student section is especially vocal. Marquette students can rival the noise created by any student section in the Big East. The school also has its fair share of passionate alumni fans including the famous Jump Around Guy. 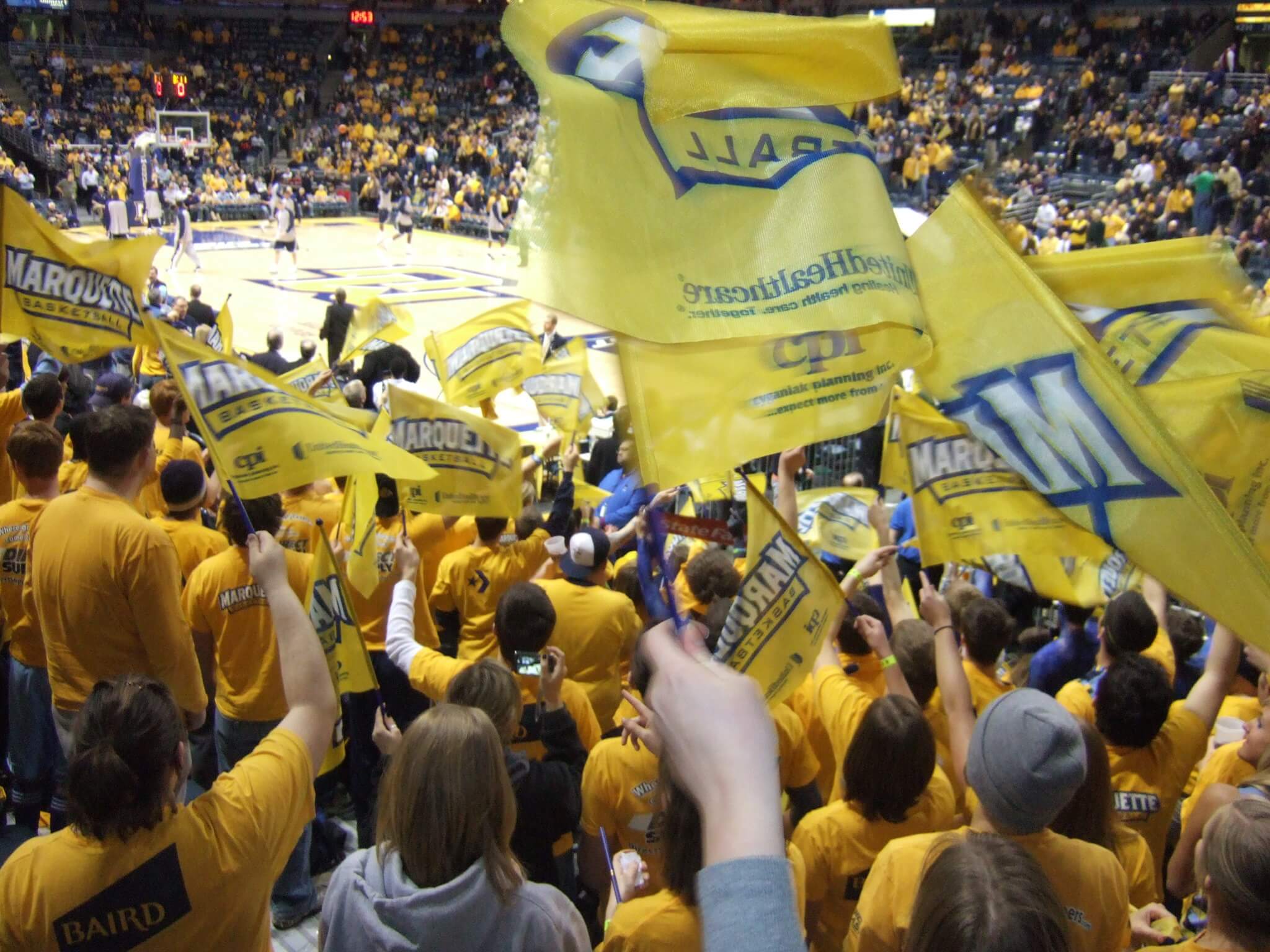 Fans all over the state live and die with the Hoosiers basketball team, and as a result, the crowd is one of the most enthusiastic in the nation. You’ll hear cheers and chants throughout the game even when the Hoosiers are down. You’ll also have no problem starting a conversation with fellow fans as Hoosiers fans are among the nicest in the country and love to talk basketball. 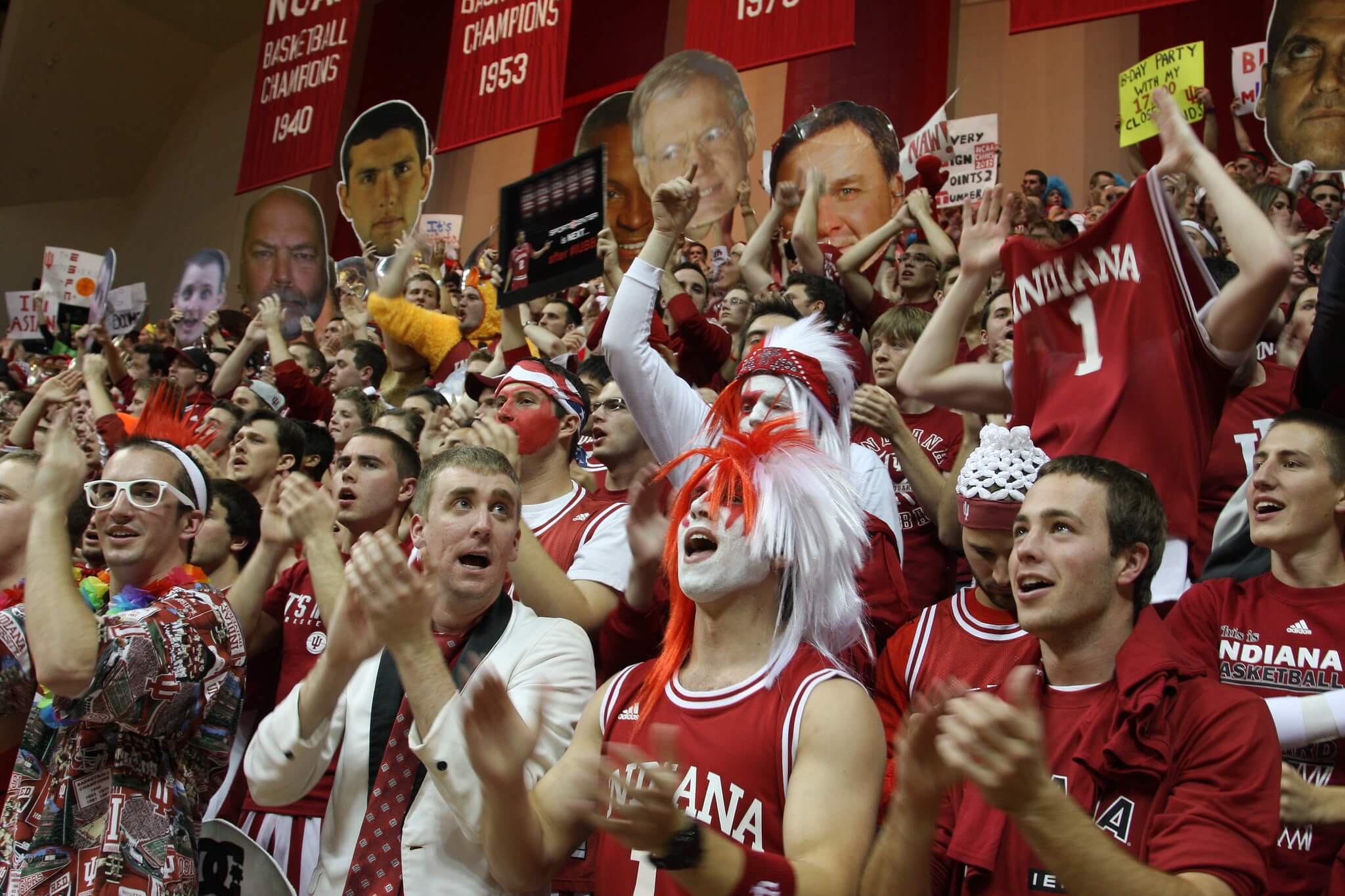 The Breslin Center is home to the Izzone. The Izzone is full of crazy die-hard students who go all out to show their support for the team. No matter what the weather, you’ll find Michigan State students lined up hours before the game. Unlike a lot of schools where the student section is at one end of the arena, the Izzone wraps around almost the entire lower level allowing the students to have a strong influence on the game. 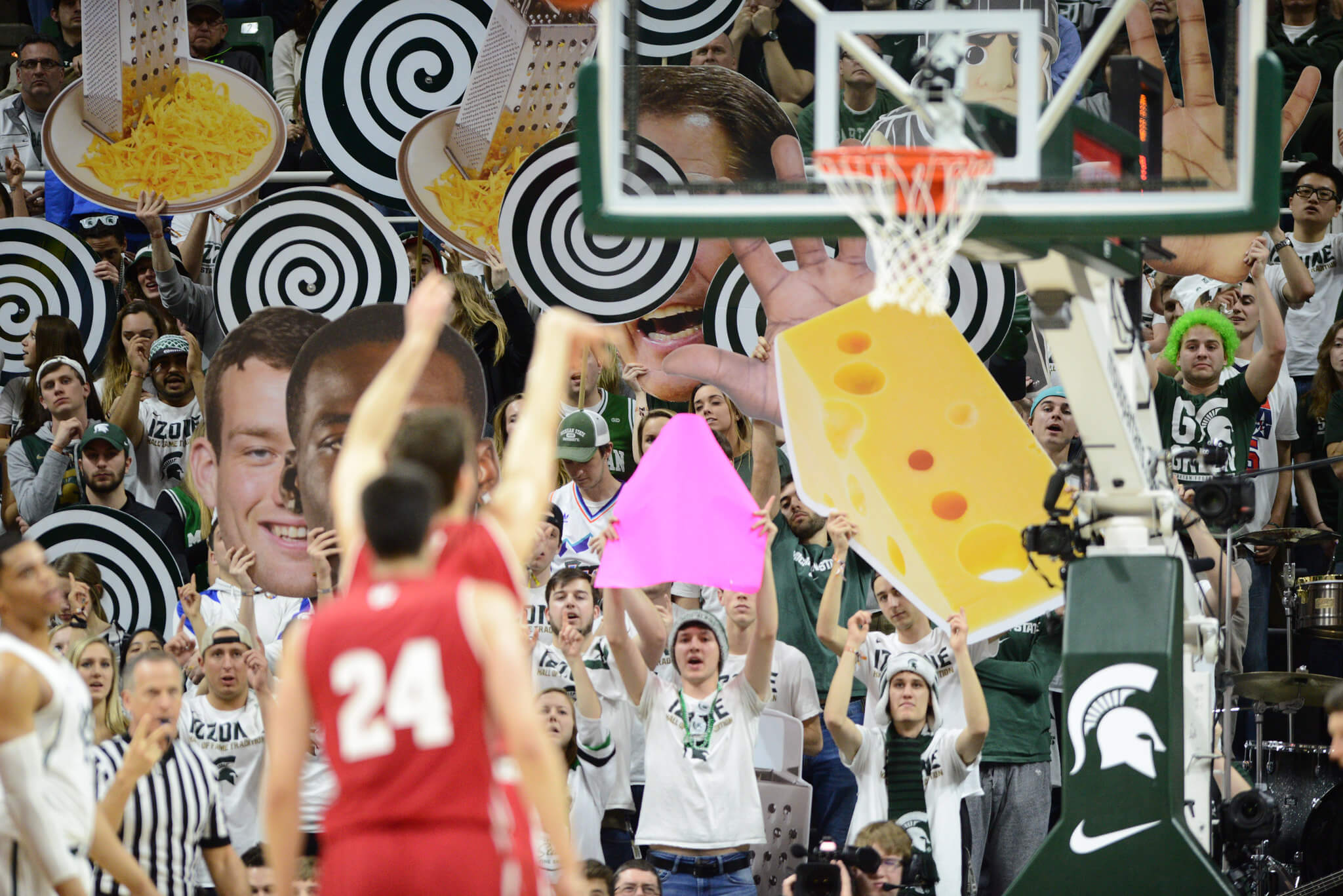 In addition to the wealth of amenities and concession options the KFC Yum! Center has to offer; it’s also home to an incredible in-game atmosphere. The fans and spirit squads do an excellent job of creating a fun and electric atmosphere. It should come as little surprise that Cardinals fans are among the most rabid in the nation since basketball is huge in Kentucky and the Cards are the biggest game in town. 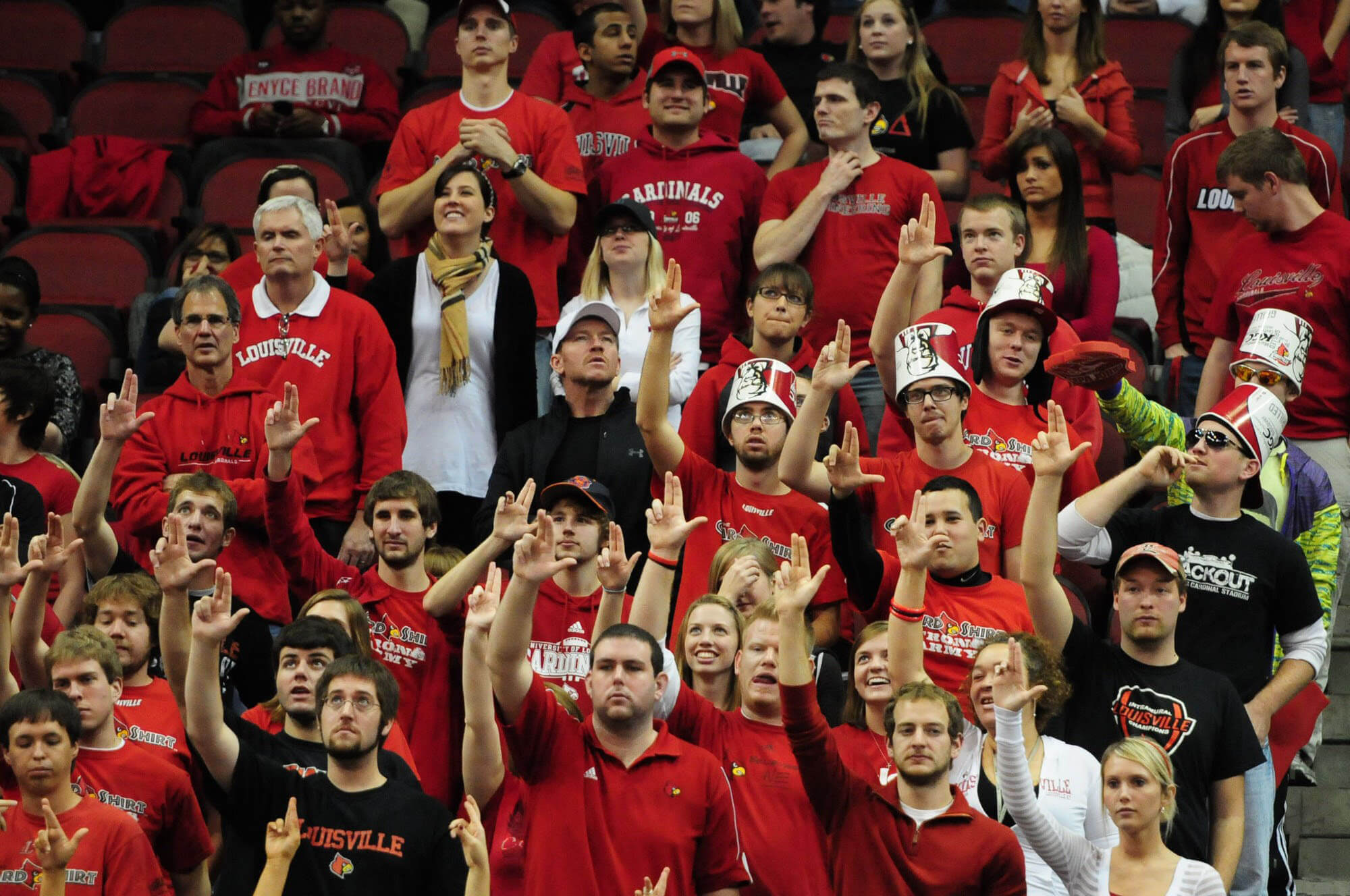 Kansas fans are one of the best fans in the nation, which can be attested to by the incredible home record of the team. The fans here live and breathe basketball, which you can see by how everyone in Lawrence comes out to support the team. Not only is the student section at Kansas incredibly loud, you’ll also see plenty of loud and rowdy fans among the alumni as well. KU fans even managed to set the record for loudest basketball arena when they recorded a decibel level of 122. 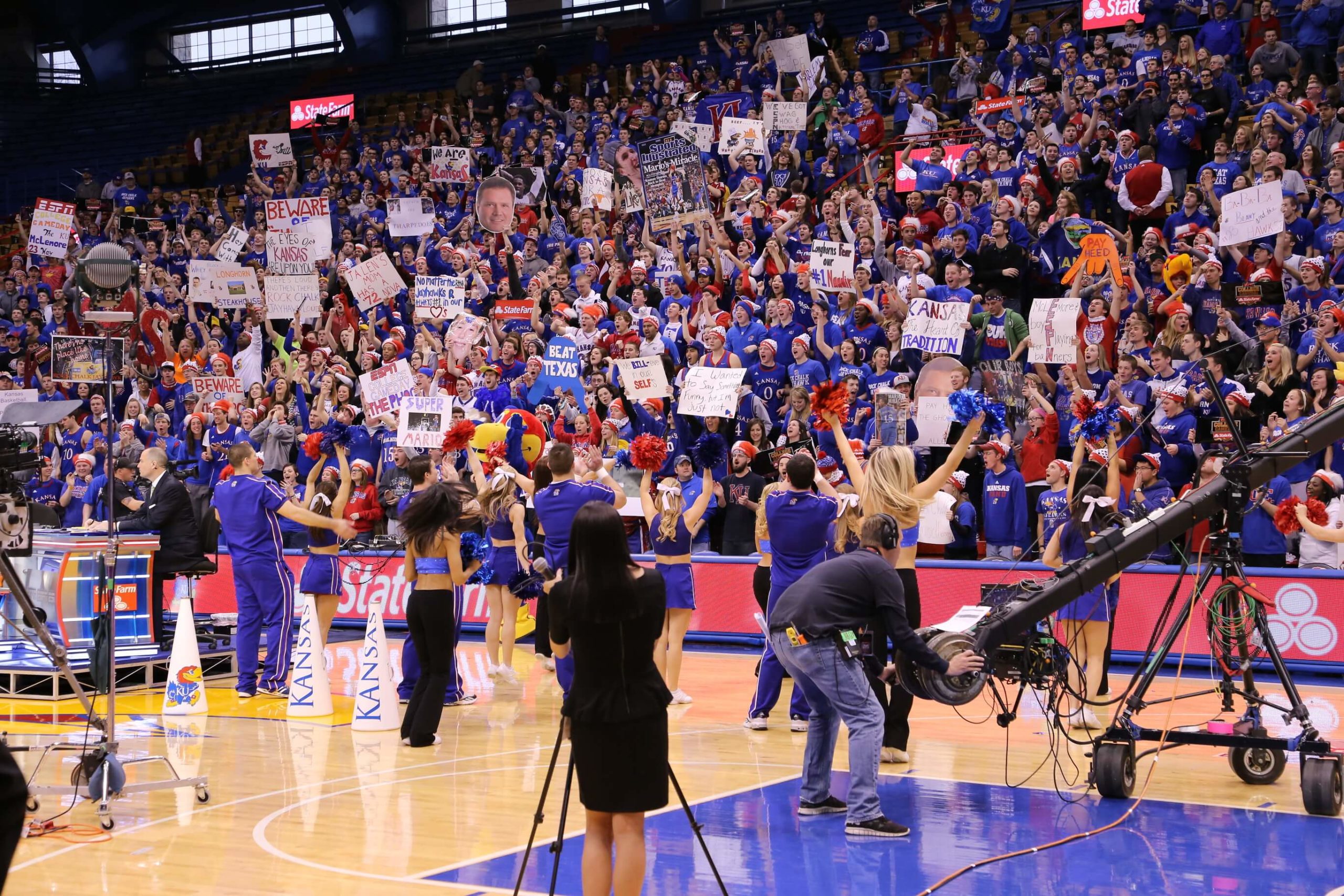 The Carrier Dome is known as the “Loud House” and it wouldn’t get that name if Orange fans, Otto’s Army as they’re known, didn’t have their share of great cheers and chants. Some of the more famous chants include the spelling out of S-Y-R-A-C-U-S-E and the “Hey Song.” If you’re attending a Syracuse game learn the chants beforehand, so you can join in on the cheers. 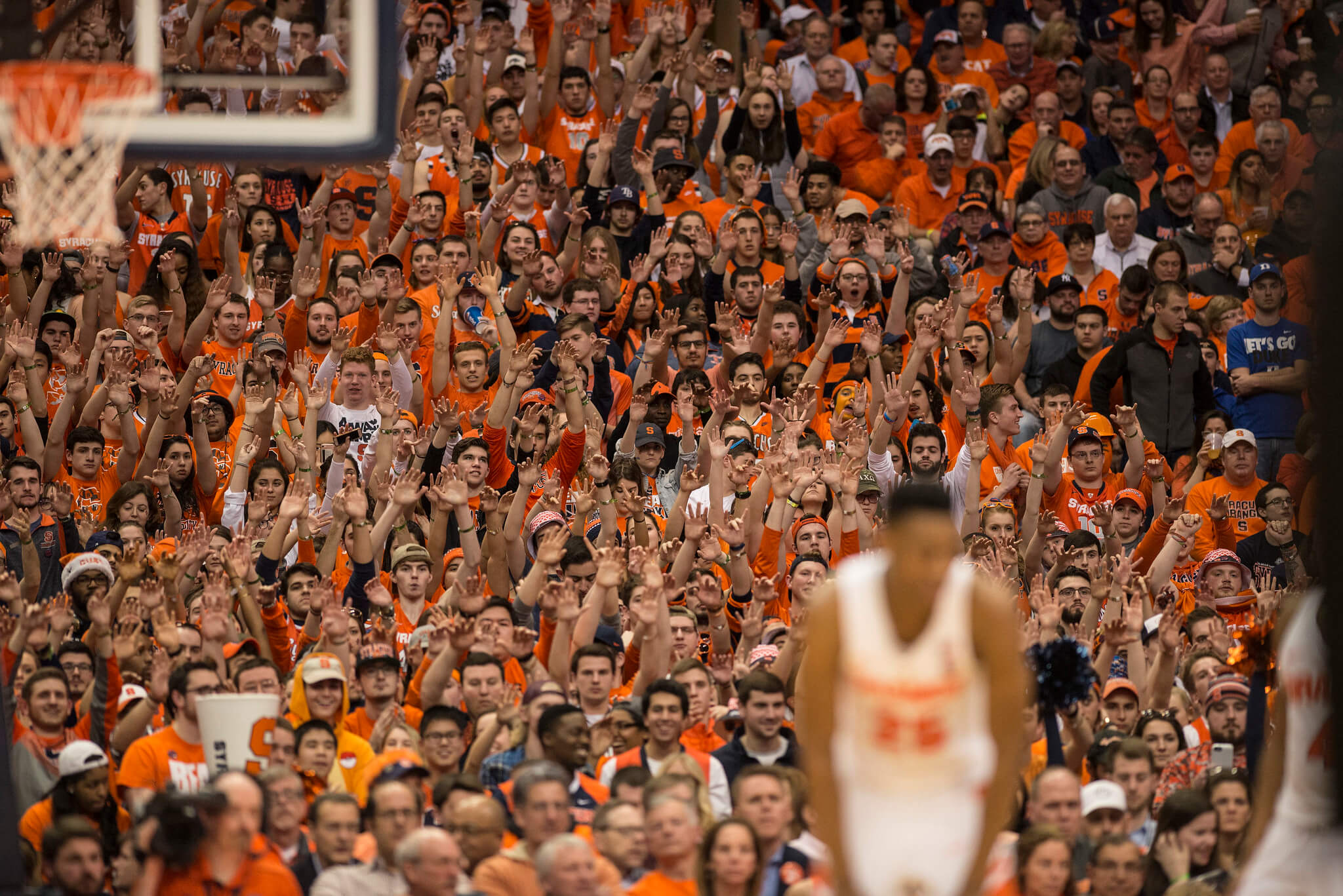 Rupp Arena is the home to one of the most incredible atmospheres in college basketball. UK fans, specifically in the student section called ”eRUPPtion Zone”,  are absolutely rabid when it comes to supporting their team, which you can see on game days as not only do the Wildcats fill the largest arena in the country to capacity but exceed it. 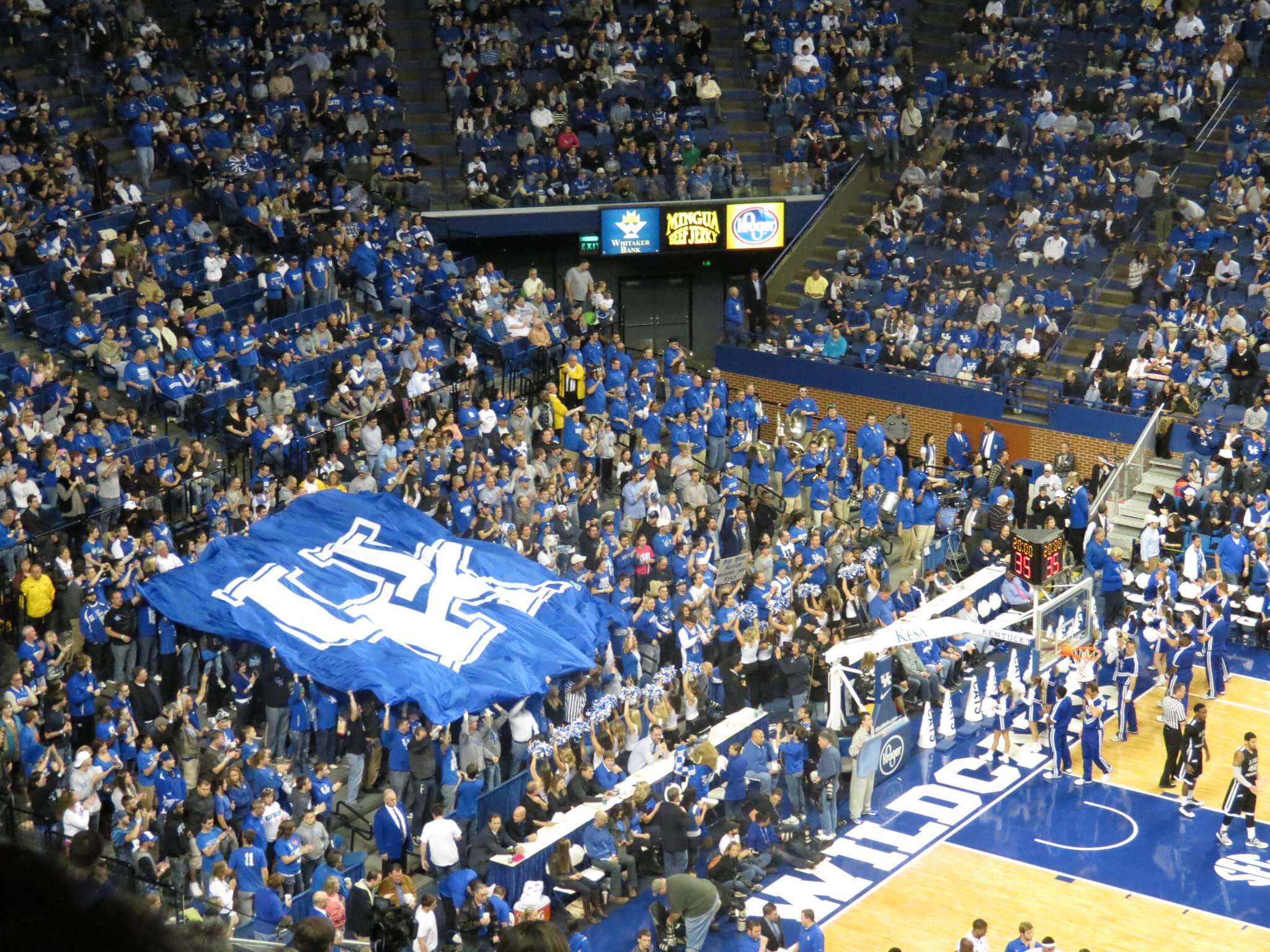 The student section inside the Dean Smith Center is especially vocal in their support. The rowdy nature and crazy antics of the Tar Pit go a long way in making North Carolina a tough place for opposing teams to play. Whether it’s going crazy during the Tar Heels warm-ups or jumping around before tip-off, the students are always showing their support for their team. 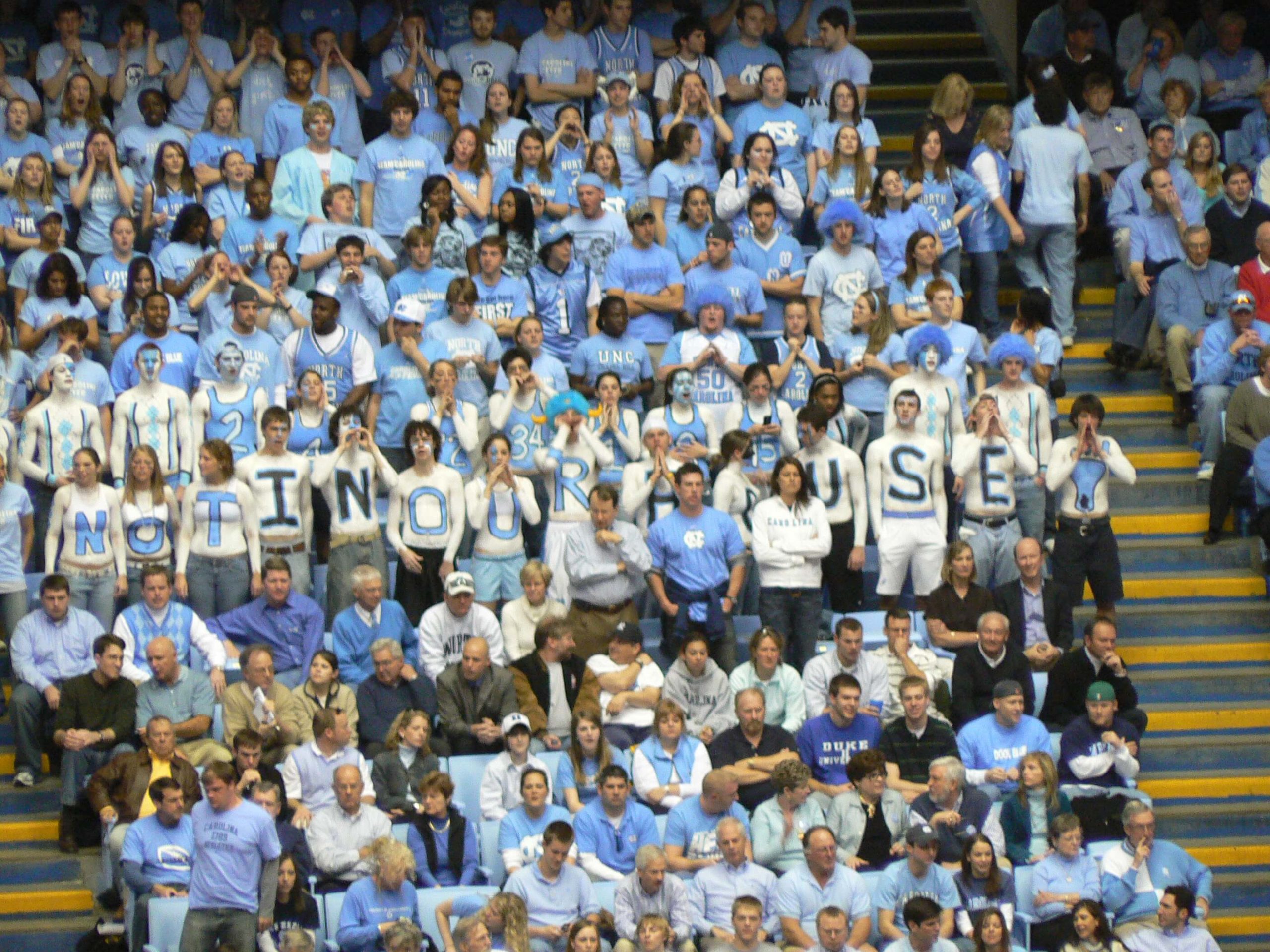 Duke has one of the most famous student sections in college basketball, so you’ll experience one of the best atmospheres out there when attending a Duke basketball games. The Cameron Crazies are known for their taunts and ability to get under opponents skin, so come prepared to be heckled if you’re wearing the opposing team’s colors. 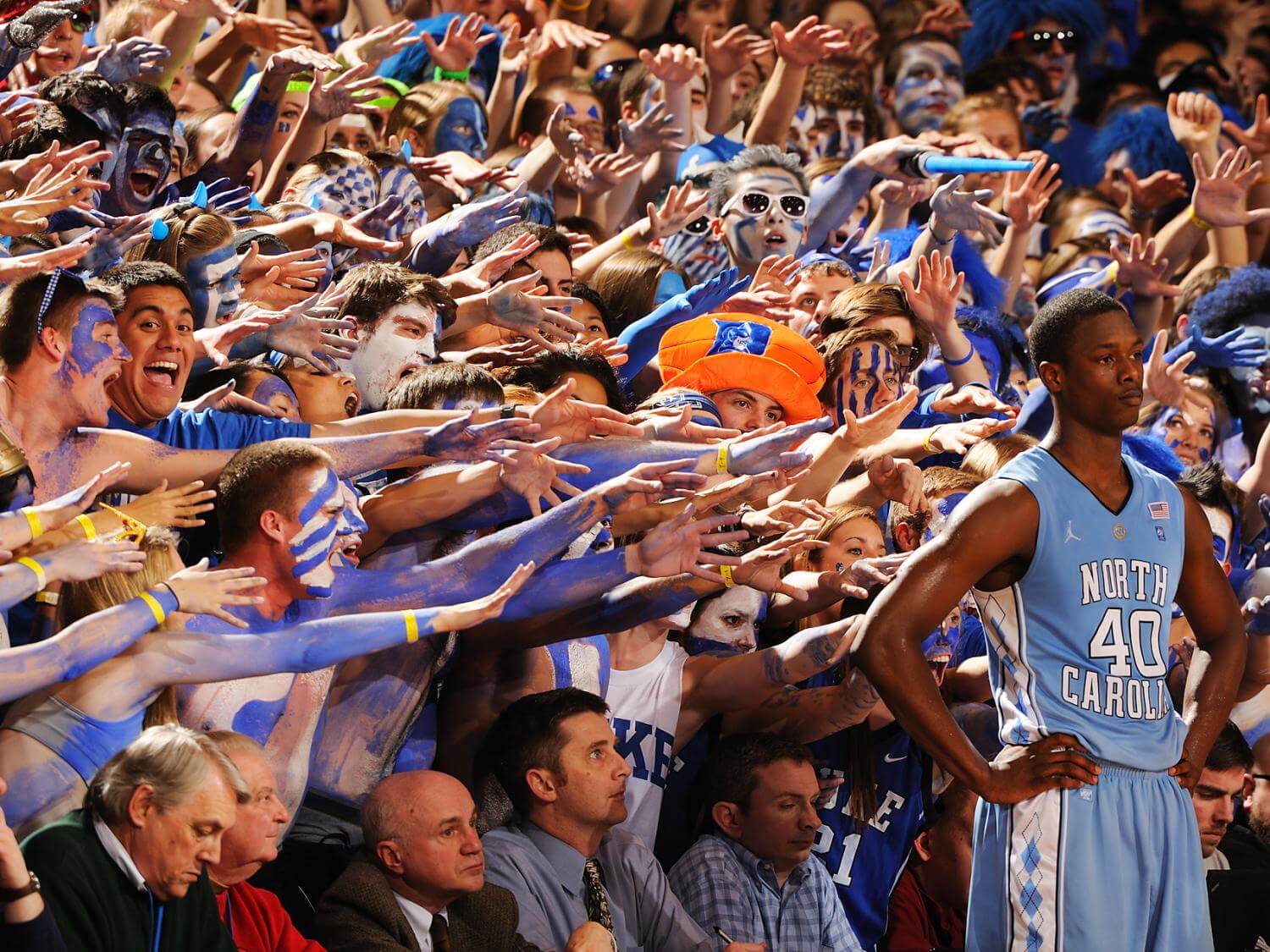