Home of the ECU Pirates

At the beginning of the fourth quarter, the fans are greeted with the raising of the “No Quarter” flag. The flag is a representation of a pirate battle in which the enemy would not surrender, and thus the Pirates must have no mercy on them. The flag signifies that the Pirates won’t give up in the final quarter and will finish off the opposition to come away with the W.

Like any great Pirates themed team ECU has a cannon that they fire off before every home game. The cannon not only fires up the crowd but also strikes fear into the heart of any team making the trip to Dowdy-Ficklen Stadium.

One must do pregame tradition is The Pirate Walk, which takes place before each home game. The Pirate Walk starts at Clark-LeClair Stadium and ends at the team locker room in the Ward Sports Medicine Building and features the football players and cheerleaders walking past hundreds of cheering and adoring fans as the team makes their way to the locker room. If you want to show off your support for the Pirates then make sure to stop by The Pirate Walk.

This classic Jimi Hendrix song is played before every home game as the players enter the field through a cloud of purple smoke. The intro gets everyone amped up to cheer on the Pirates throughout the game, which gets things started off on the right foot.

The fact NC State and ECU are the two largest universities in North Carolina and the proximity of the schools has led to the creation of a somewhat heated rivalry over the years. The rivalry on the gridiron dates back to 1970 when the Wolfpack took down the Pirates 23-6. The rivalry has flourished since then as 2007 even saw the addition of the Victory Barrel trophy. ECU has fared better in the series of late having won the last two matchups between themselves and the hated Wolfpack.

6. The Ghost on the Wind

This popular poem is read before many of the home sporting events at East Carolina and is a great school tradition that gets everyone in the mood to cheer on their Pirates.

The most vocal section at any Pirates game is the “Boneyard.” The “Boneyard” is the nickname of the student section of Dowdy-Ficklen Stadium, which is often the most raucous part of the entire stadium. Chants and screaming fans will be heard from this section all throughout both the stadium and the game, so if you’re sitting here then come prepared to bring your vocal chords and cheer on the Pirates.

The Pirates reveal their “true colors” by lifting up a flag which is a skull and crossbones with a purple captain’s hat and ECU on it before the game. This declares that the Pirates are gonna attack their enemy and is a great way for the Pirates to motivate the team and fans before the game. 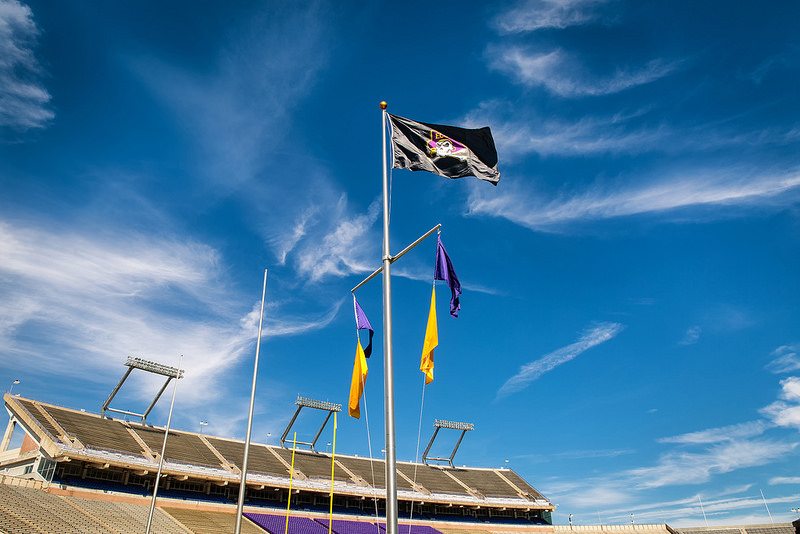 The lovable mascot of the ECU Pirates can be seen entertaining the crowd at every home game. He is also quite possibly the only Purple Pirate you will ever see in your lifetime, so make sure to take in his antics while at the game.

ECU’s rivalry with UCF is one of the newer ones in college football. However, it is quickly becoming a very heated one as the two schools have played in the same conference 2005, first in Conference USA and then starting in 2014 the American Athletic Conference. The Pirates have had the edge on the Golden Knights since the beginning of this rivalry having won the first matchup in 1991 and continue to lead the all-time series to this day with a 9-4 record.