Home of the LSU Tigers

Tiger Stadium often referred to as Death Valley, originally opened in 1924 with a capacity of 12,000 and has since been renovated and expanded to a massive capacity of 102,231, making it the third largest stadium in the SEC. Tiger Stadium is unique in the fact that most games are played at night as opposed to during the day, and the Tigers have a better record under the lights than during afternoon games.

The atmosphere inside Death Valley is intimidating, exciting, and very, very loud. Many surveys have found that the home of the Tigers is one of the loudest and craziest stadiums in all of college football, most recently in 2013 when the NCAA declared Tiger Stadium as the loudest stadium in college football. Other surveys include being voted the most difficult place to play by multiple publications/associations (1987, 1989, 1995, 1998) and ESPN ranking Death Valley as the scariest place to play (2007).

It’s hard to put exactly how loud and crazy the fans are at LSU, but it is worth mentioning that they once caused an earthquake. On October 8th, 1988 the LSU-Auburn rivalry game was given the title of the earthquake game. Why do you ask? Auburn led 6-0 with two minutes left in the 4th quarter when LSU quarterback Tommy Hodson led the team down the field and threw an 11-yard touchdown pass to Eddie Fuller. LSU fans erupted into cheering and stomping their feet so loudly that the seismograph in LSU’s Howe-Russell Geoscience Complex registered it as an earthquake and securing the LSU fan base as one of the loudest in college football.

There are a couple unique and defining features of Tiger Stadium that make the stadium stand out among others in its conference, including “H” style goal posts and marking yard lines ending in “5” (most stadiums only mark the yard lines ending in “0”). Between a successful football program and some of the loudest fans in all of the SEC, game day at Tiger Stadium is an experience you will never forget. 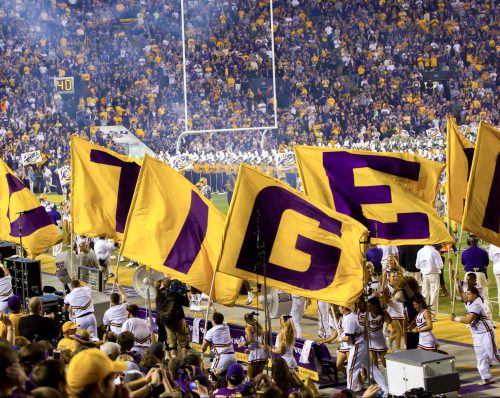 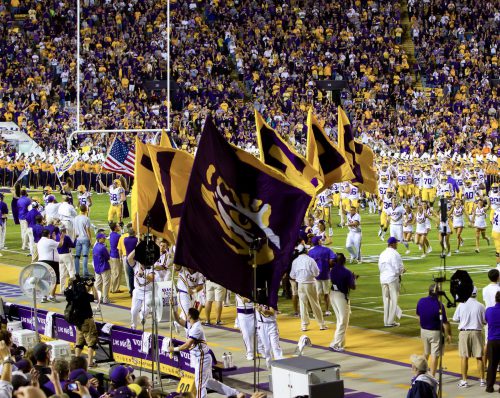 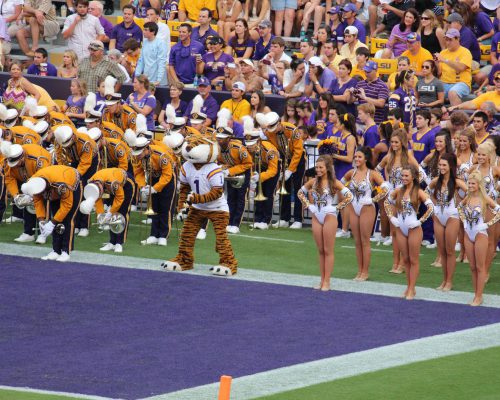 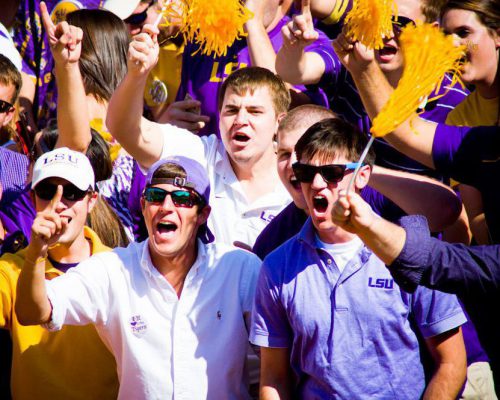 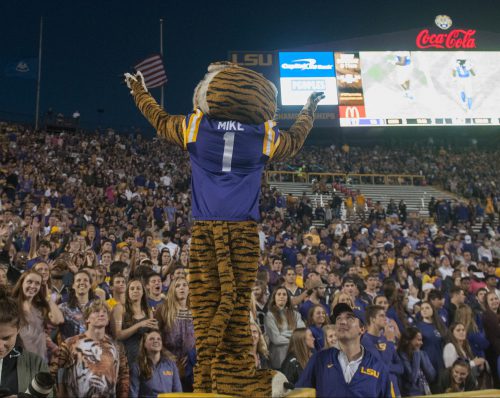 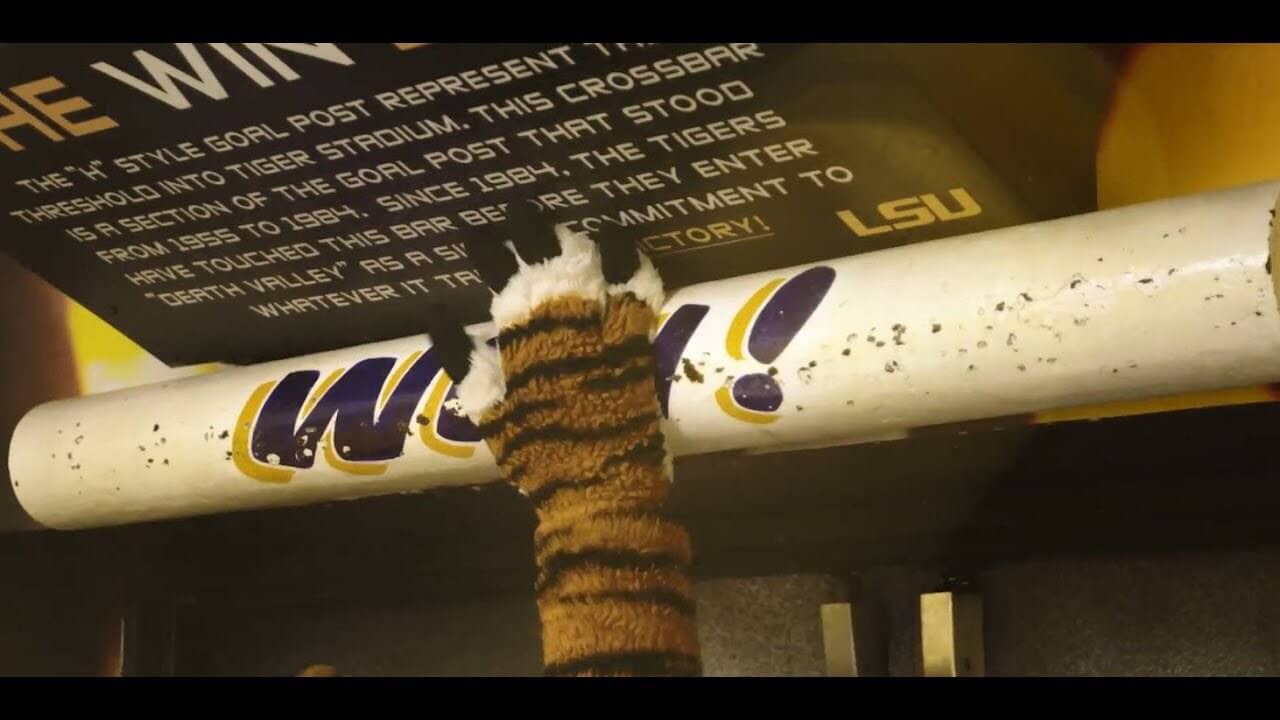 The crossbar from the goalposts that stood inside Tiger Stadium has been mounted above the door which leads from the LSU locker room onto the playing field. The crossbar also has the word “Win!” painted on it to give the players some extra motivation. 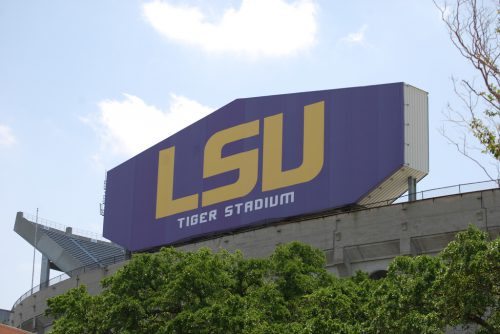 From the upper deck, the beautiful surroundings of Tiger Stadium can be seen such as the state capitol, the campus oaks, and the clay-tiled roofs on campus. 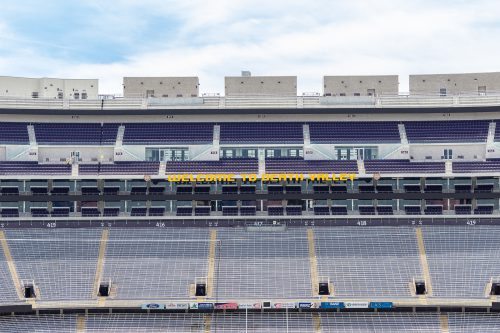 LSU wants their opponents to know exactly where they are and that is Death Valley, one of the loudest and most intimidating stadiums in all of college football. LSU wears this title proudly and has massive lettering inside the stadium proclaiming “Welcome to Death Valley.” 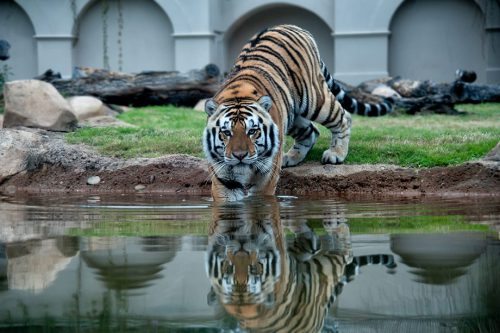 Mike is the name of both the live and costumed versions of LSU’s official mascot. During home football games, Mike’s cage on wheels is positioned right outside the opponent’s locker room at the southeast end of the stadium, forcing the opposing team to run past him to access the field. Mike also rides through Tiger Stadium with the LSU cheerleaders before the game. When it is time for a new tiger to be found, LSU fans await the white smoke that will blow from the LSU School of Veterinary Medicine signifying a new mascot has been found.

First, Second, and Third Down Cheers

The first down cheer includes the “Hold That Tiger” musical phrase from Tiger Rag played by the LSU band and is followed by a “Geaux Tigers.” The second down cheer is a musical selection followed by the fans chanting “L-S-U!” and finally, the third down cheer is based on the song “Eye of the Tiger.” 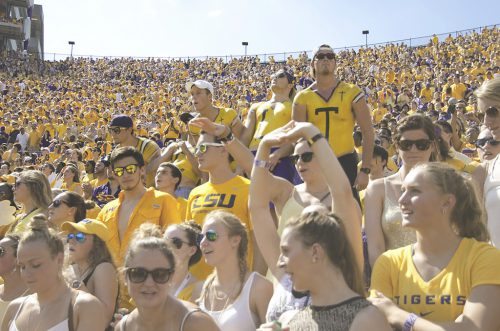 Before and during football games, fans will yell this cheer about famous food in Louisiana. “Hot boudin, cold coush-coush (pronounced koosh-koosh), come on Tigers, push push push (pronounced poosh to rhyme with koosh)!” 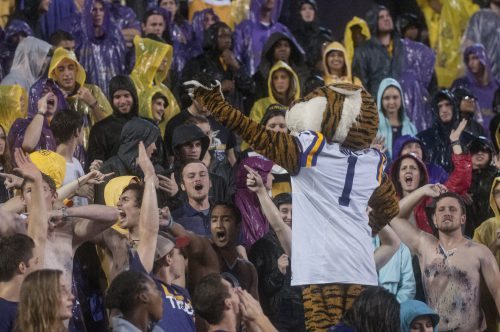 Louisiana State University fans will also yell out “Tiger bait!” to fans from the opposing team. 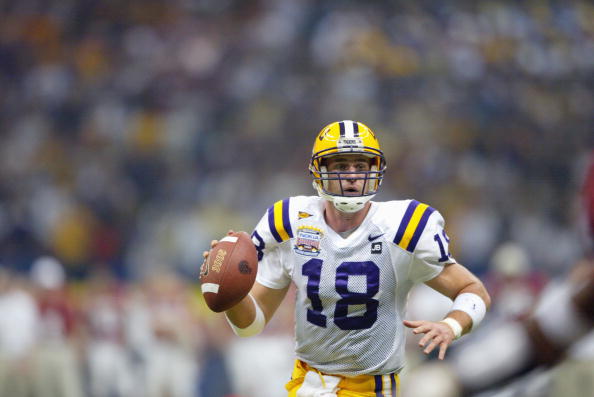 In 2003, LSU quarterback Matt Mauck guided the Tigers to a national championship, thus starting the tradition of his jersey number being synonymous with success. After his final season, Mauck passed on the jersey to running back Jacob Hester who also helped obtain a national championship in 2007. Taking into account athletic performance as well as good character and selfless attitude, the receiver of jersey number 18 is voted on each season. 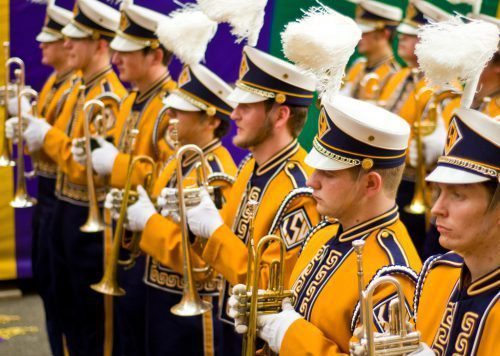 Whenever LSU forces a turnover or gets the ball back via a defensive stop, the band will play Chinese (Tiger) Bandits while the fans bow in respect to the defensive line. 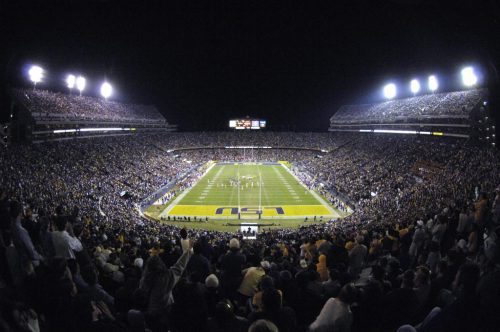 A more recent tradition was started in 2012 in which the lights that illuminate the upper arches on the north end of the stadium light up in gold following an LSU victory. 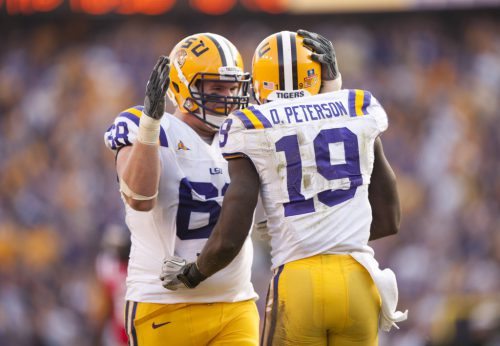 One of the most unique things about the LSU Tigers is their white home jerseys, as most NCAA teams will wear their darker color jersey for home games. The tradition started in 1958 when Coach Paul Dietzal decided the Tigers would wear white at home and ended up winning a national championship that year. Due to rule changes in the NCAA, the only time LSU currently wear their white jerseys is for the home opener and home games against their SEC opponents.

Check out the University of Alabama stadium guide!