Don’t miss the Gold Star Marching Band’s march over before the game. The band marches from the music building to the Fargodome where they break into three bands and perform in the west lot. The performance is one of the best parts of any tailgate making it must-see.

The rivalry between North Dakota and North Dakota State dates back to 1894 and is always one of the Bisons biggest games of the year when it’s played. The winner of the rivalry game takes home not only bragging rights but also the Nickel Trophy giving the game extra importance. The rivalry is currently only played sporadically because the two teams are in different conferences. However, the rivalry is expected to be re-established as an annual contest in 2019. You won’t want to miss it when the UND-NDSU rivalry starts up against, so make sure to get tickets to the next matchup between these two longtime rivals.

The pregame tunnel walk gets everyone pumped up and ready to cheer on the Bison. The walk brings everyone to their feet and gets the Fargodome rocking, making it one of the best parts of any NDSU game.

Bison fans are some of the best tailgaters around, and as a result, you’ll find lots of tricked out tailgate vehicles throughout the tailgate lots. Stop by and check them out as the owners will more than likely be happy to talk to you about their pride and joy.

The North Dakota State Bisons and the South Dakota State Jackrabbits play each year for the Dakota Marker. The two teams first met in 1903, and since then they have developed a long running rivalry that became an annual fixture in 1919. In 2004, the Dakota Marker trophy was added to the rivalry, and today the winner of the NDSU-SDSU game takes home bragging rights as well as the trophy. The Bison may lead the all-time series 60-41-5, so come out and watch them try to extend their lead over rivals SDSU.

The Gold Star Marching Band is a can’t miss part of any Bison game and will keep you entertained throughout the game with their performances. The pregame and halftime shows are must-sees, so don’t miss either during your trip to the Fargodome.

Keep an eye out for NDSU’s beloved mascot Thundar. Thundar gets into all kinds of shenanigans at Bison games, and he was even a top seed in the 2008 Capital One mascot challenge. He’s a fun part of any Bison game, so enjoy his antics during the game. 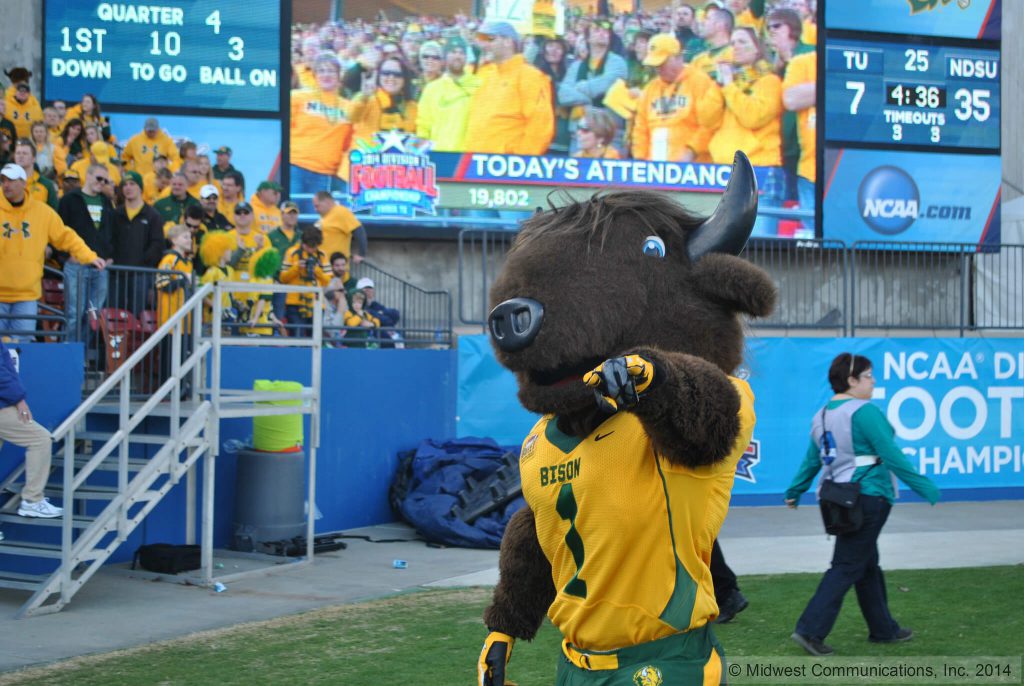 The NDSU Cheer Team pumps up the crowd throughout the game with their cheers and routines. Join in the cheers and chants to show your support for the Bison when taking in a game at the Fargodome.