Beaver Stadium is one of the coolest places to visit in the Big Ten as there is so much history behind the Penn State Nittany Lions. It is also the second-largest stadium in the Western Hemisphere and third largest in the world with a seating capacity of 106,572. One of the coolest traditions comes in the form of the white out.  Everyone in the stadium throws on as many white pieces of clothing they have and makes the crowd look like a blanket of fresh snow.  It’s truly an impressive site and can be very distracting to the opposition. When attending a game at Penn State make sure to wear white so that you can take part in this great game day tradition.

The signature chant from the Penn State fans is “We are Penn State.” The chants usually start from the student section with a loud WE ARE, calling for the rest of the fans in the stadium to reply with a thundering PENN STATE.  In addition to this, whether you are a fan of hair rock or not, the entire stadium goes wild when songs such as Livin’ on a Prayer, Don’t Stop Believin, Hey Baby, and Sweet Caroline are blasted over the PA speakers at Beaver Stadium.  The only thing that tops this is the tradition of playing the techno song Zombie Nation, which causes the entire crowd to bounce up and down and chant ooooh oooh oooh. Zombie Nation will have you jumping up and down with the rest of the Penn State crowd as you make the stadium rattle and shake.

The student section at Beaver Stadium is amazing; they start the Penn State chants and all over the stadium the seniors dress in navy during the white out to form a large S that can be seen all across the stadium. In the S zones, the school’s mascot will jump into the stands and crowd surf across the section as well. The student section at Penn State games has a blast and will surely entertain you when attending a game at Beaver Stadium. 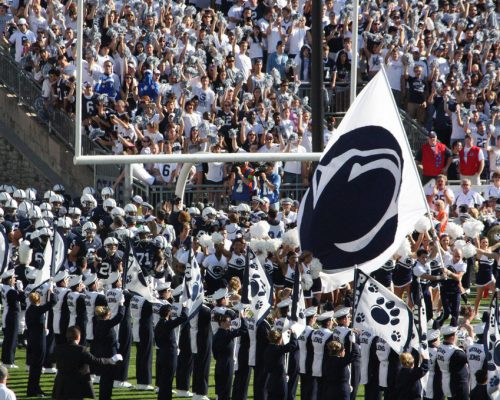 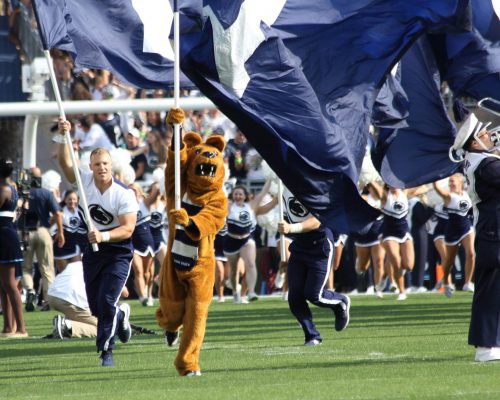 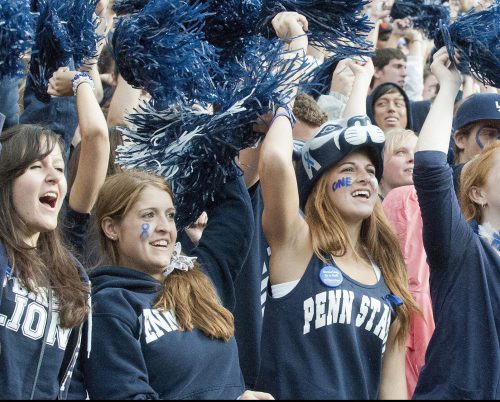 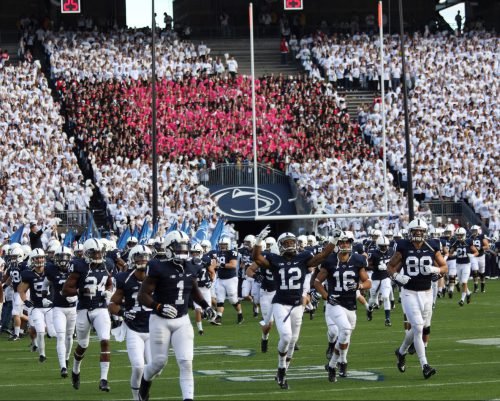 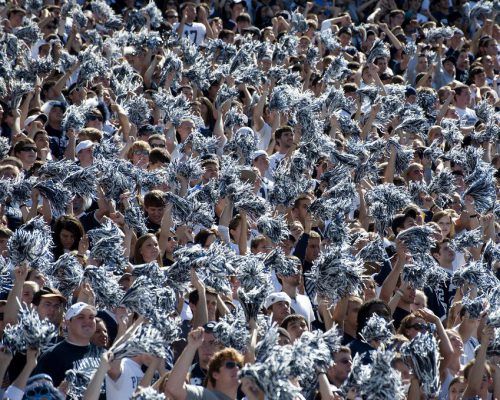 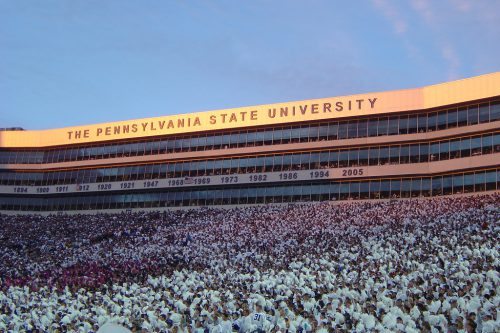 In 2006, the stadium added large blue lettering to spell out “The Pennsylvania State University” outside of the suites. Underneath the letters are a list of Penn State’s undefeated, national championship, and Big Ten championship years to honor the massive success of the Nittany Lions. 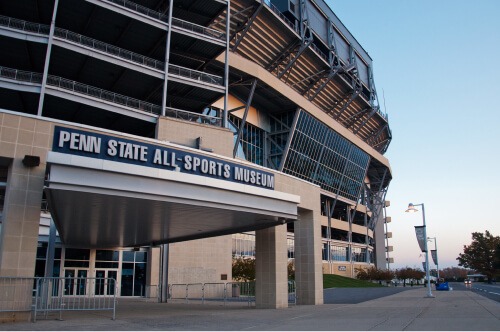 Located in the Southwest corner of the stadium is the All-Sports Museum and celebrates the success of Penn State University athletics. The museum is filled with memorabilia highlighting the best Penn State teams and student-athletes and is open to the general public on the weekends. 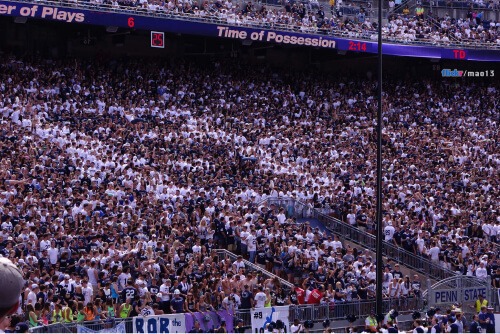 This section behind the end zone are all given white and blue shirts to create an “S” in the student section. 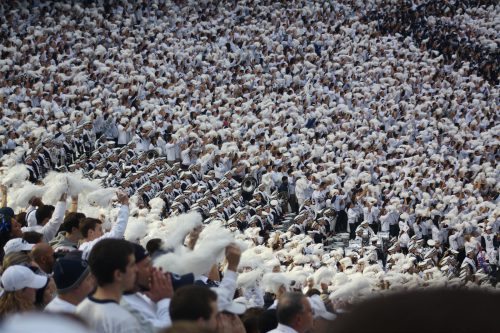 In 2005 against Ohio State University, almost every student and fan at the game wore a white shirt creating a sea of white and ultimately credited with aiding the Nittany Lions to a 17-10 victory. Wearing white to the games is still a widely held tradition inside Beaver Stadium. 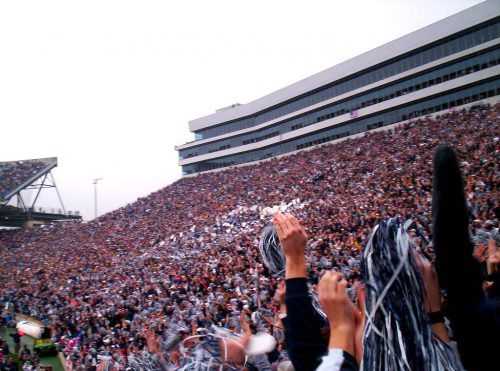 After a big play by the Lions, Kernkraft 400 by Zombie Nation is played over the PA system while the entire Penn State crowd waves their rally towels/shakers and shouts “WE ARE PENN STATE!” 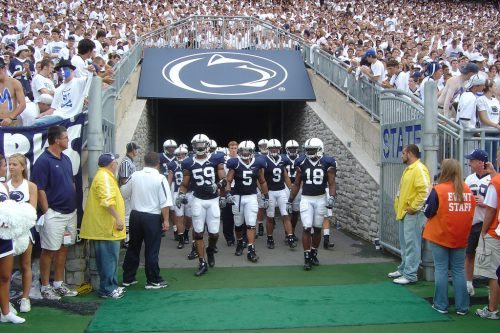 This Penn State tradition involves the head coach leading the team from the south side of the stadium to a closed metal gate that reads “PENN STATE.” Upon the team's arrival, the Nittany Lion will open the gate and motion for the team to walk through as if welcoming them to their battleground. 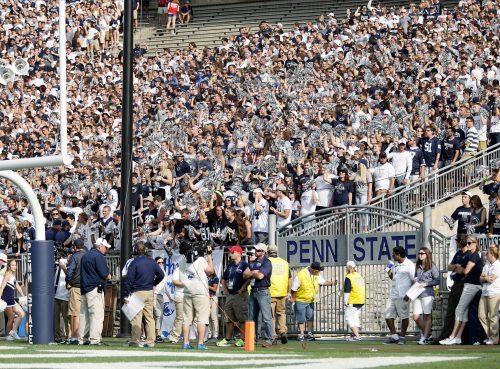 The student section will initiate a slow wave and increase the speed after each pass during football games inside Beaver Stadium.

Check out the University of Maryland stadium guide!