Home of the South Carolina Gamecocks

The South Carolina Gamecocks play inside Williams-Brice Stadium which opened up in 1934. It has grown significantly throughout the years having originally held 17,600, however, today it has grown to a capacity of 80,250. The Gamecocks sell out all 80,250 seats for most games, which creates a rocking atmosphere and gives South Carolina quite the home field advantage.

When it comes to the Gamecocks and their fans, they are all about loyalty. Whether it be their best season or their worst season, they will always be there rooting for their team. These fans are one of a kind and are one of the most valuable assets to the team.

One of the coolest things about attending a South Carolina game is Sir Big Spur, the school’s live gamecock mascot. He is one of the few live mascots that is with the team at both home and away games so that you can catch him at William-Brice Stadium as well as other stadiums throughout the SEC. Listen for the crows and caws of Sir Big Spur to ignite the crowd into a frenzy.

Another must see part of any South Carolina game is the player entrance. The entrance at South Carolina is one of the most atmospheric in all the nation and will make the hair on the back of your neck stand up. The PA announcer will announce, “Welcome to Williams-Brice,” which will be followed by as a video plays along with 2001: A Space Odyssey. Then fireworks will launch as the team runs onto the field and everyone works themselves up into a frenzy waving towels around. This intro is something you’ll want to be a part of, so make sure to get to your seat early.

You’ll have a blast at Williams-Brice Stadium experiencing one of the loudest and most passionate crowds in all of college football. 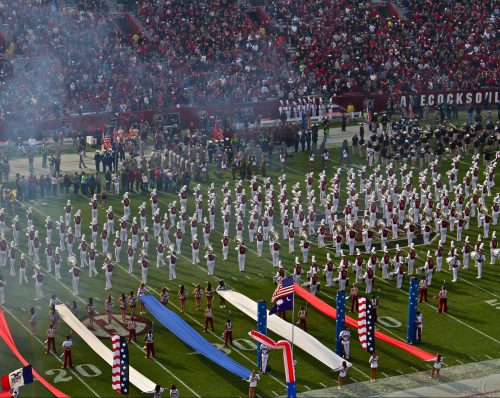 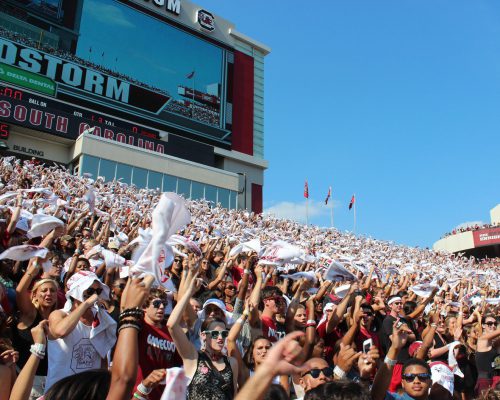 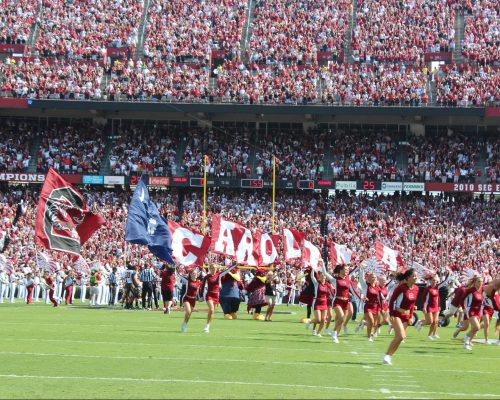 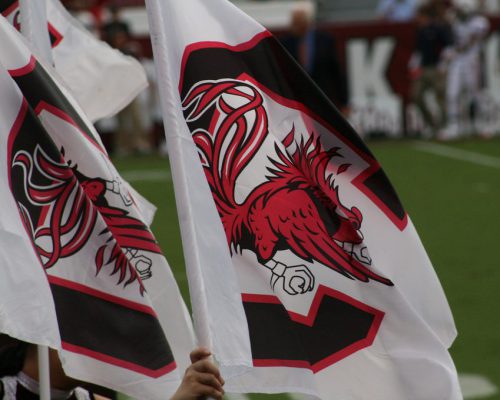 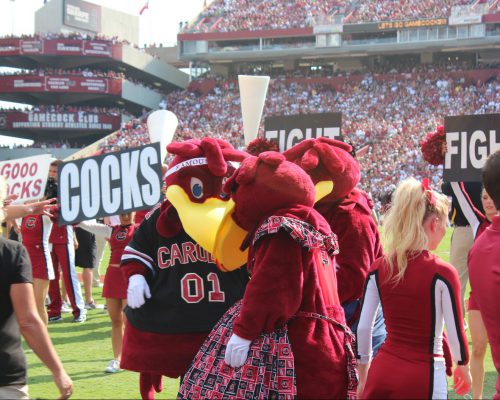 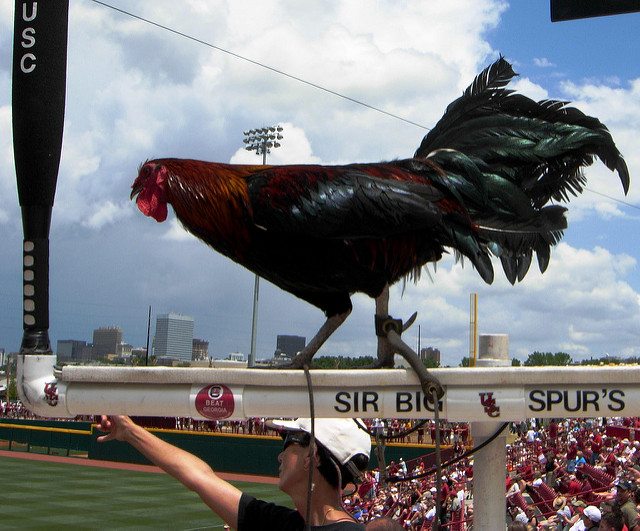 The live mascot at South Carolina games goes back to when Eric Hyman took over as athletic director in 2005 and was looking for a way to add excitement to the Gamecock football experience. Someone mentioned that a fan had been bringing a live rooster to Gamecock baseball games and the rest is history. 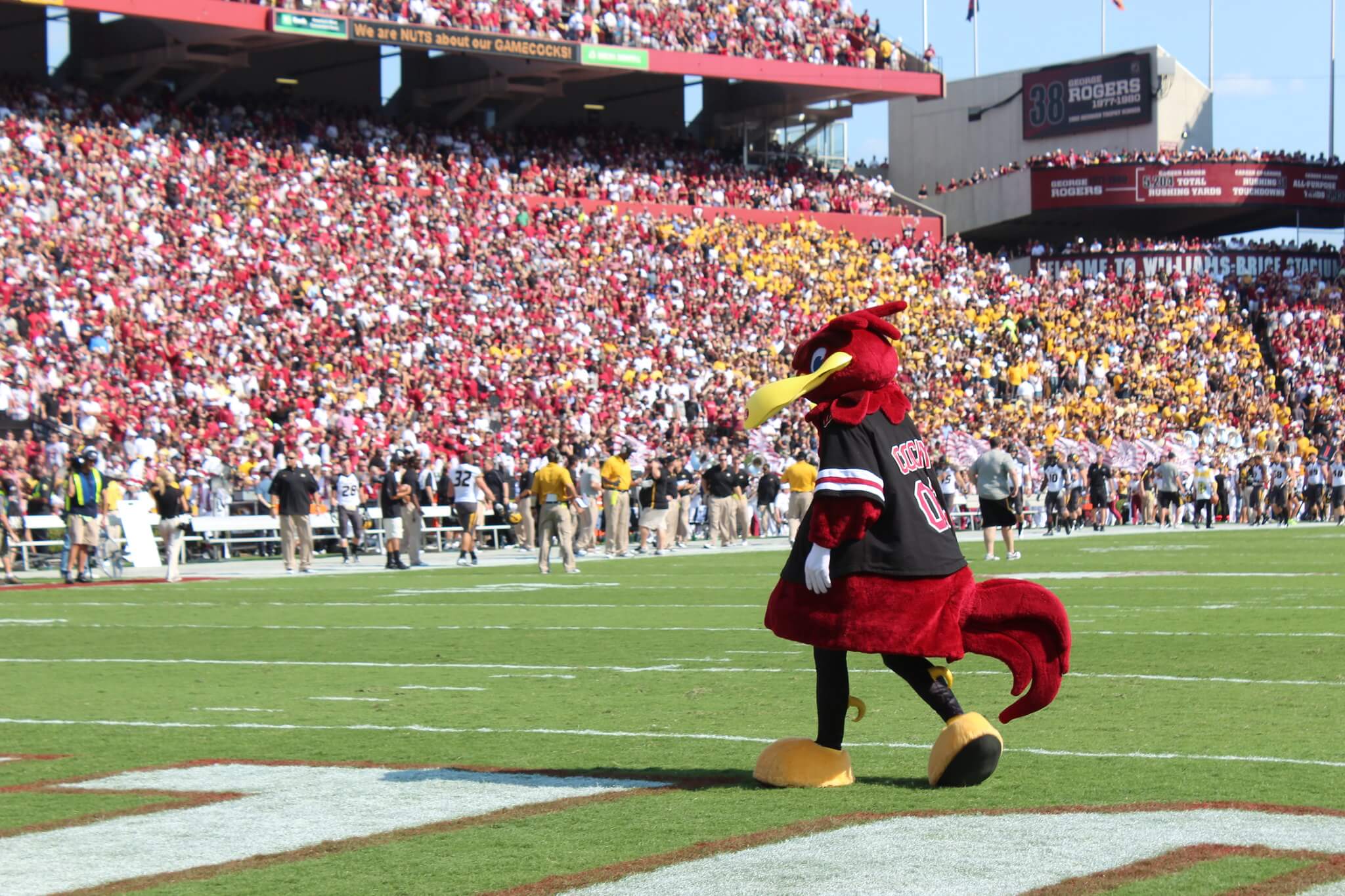 Cocky was "born" in 1980 when he took over for his dad, Big Spur, at South Carolina athletic events. He's become one of the most recognizable mascots in college football and is a part of the Gamecock tradition.Cocky appears out of nowhere, in his magical black box with his smoke screen, and gets the crowd hyped up as the football team enters Williams-Brice to do battle with their opponent. 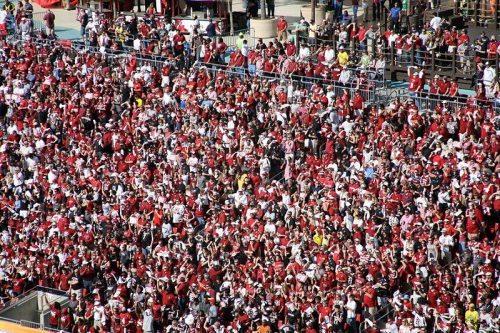 After every South Carolina touchdown a rooster crow is played over the PA. The rooster crow lets everyone know where they are and riles the fans up even further as everyone jumps up and down celebrating the Gamecocks score.