Home of the Tennessee Titans

The barbecue at a Titans tailgate is truly something special. Not only is it among the finest barbecue you’ll find anywhere throughout the country, but the fans also have a special tradition of serving different types of meat depending on the opponent. For example, when the Bills are in town you’ll encounter a ton of buffalo meat while the rival Colts conjure up steaks and the Dolphins arrival causes fans to bring out the catfish. Regardless of who is in town the delicious barbecue found at a Titans game is top notch and not something you would want to miss out on. 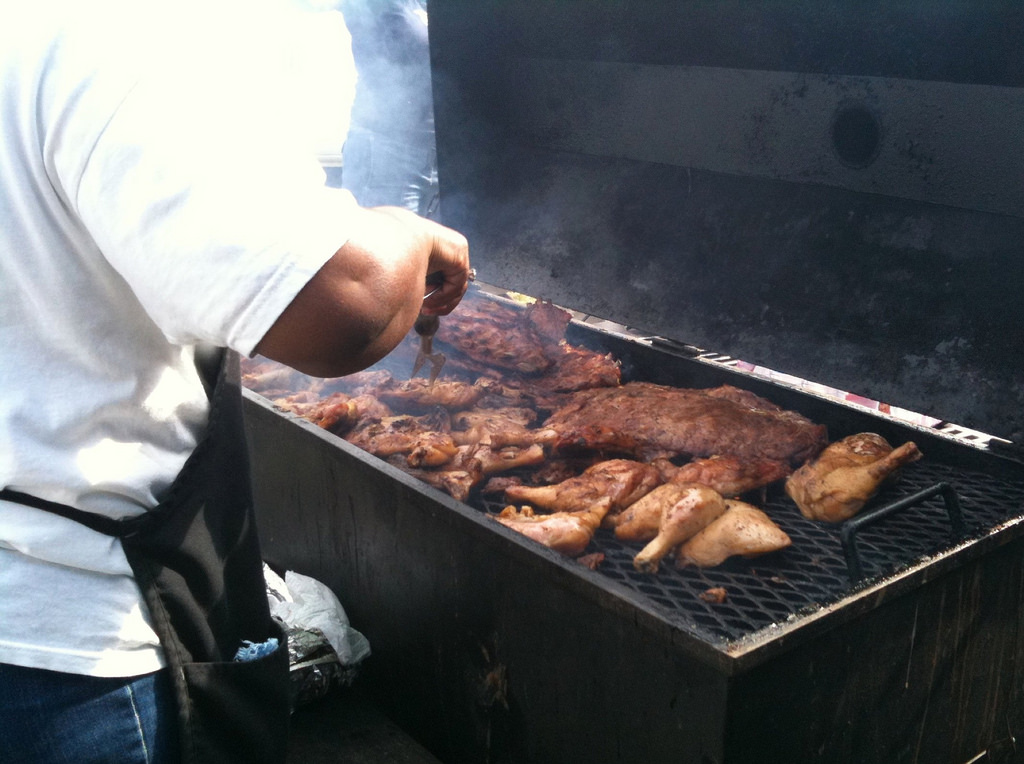 Before Kickoff of every home game, the Titans hold a ceremony paying tribute to you, the fans. An honoree of the Titans runs out of the tunnel before the team and plants a sword on the logo in the middle of the field. The ceremony is an incredible way for the Titans to honor those who make the NFL run, the fans, and is quite the sight to behold as well. 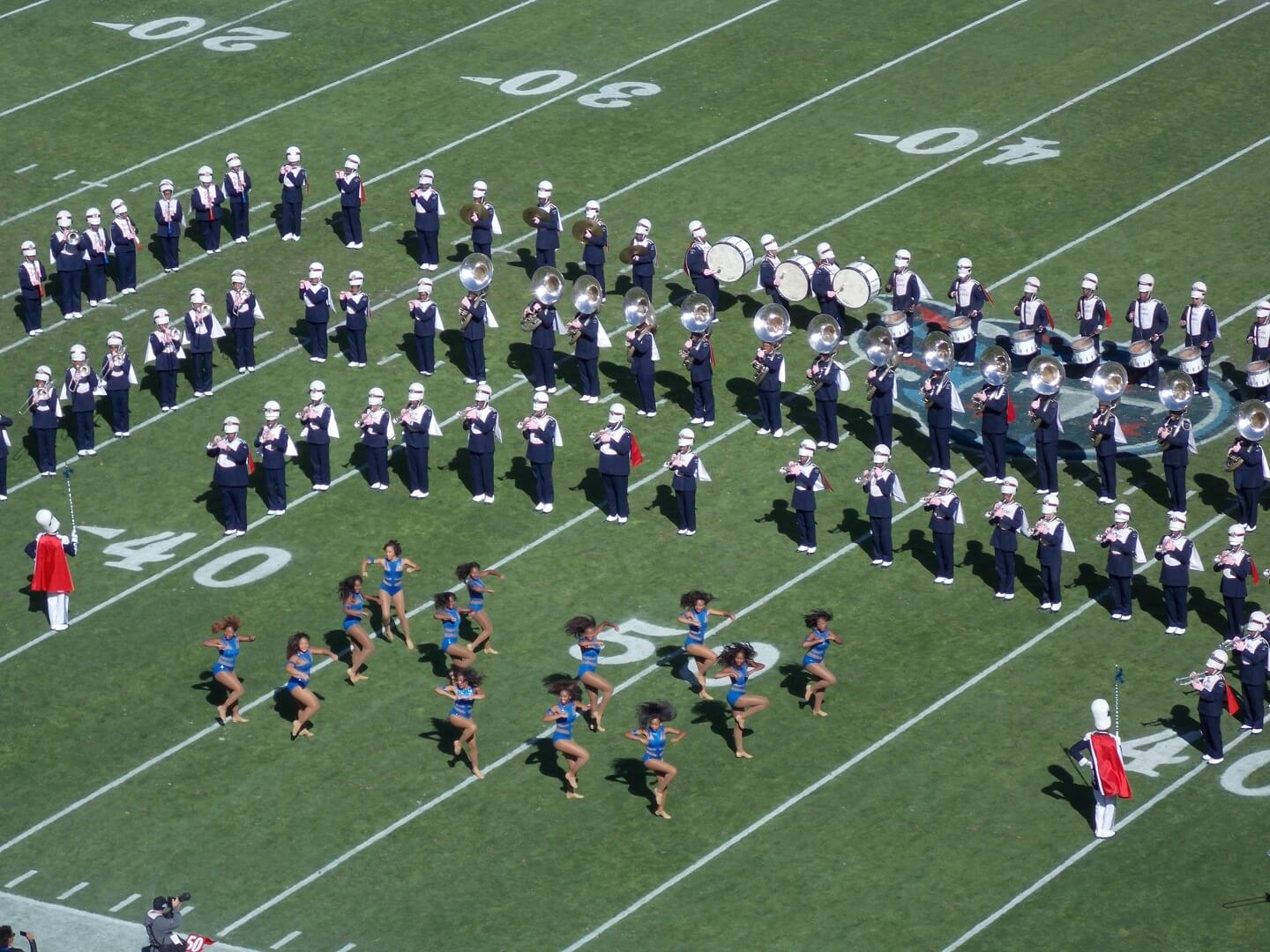 The best place to enjoy cold beers and amazing BBQ is the South End Zone parking lot. The lot features a designated tailgate area creating a block party like atmosphere that has had diehard Titans fans flocking to the south end zone lot since the stadium opened in 1999. 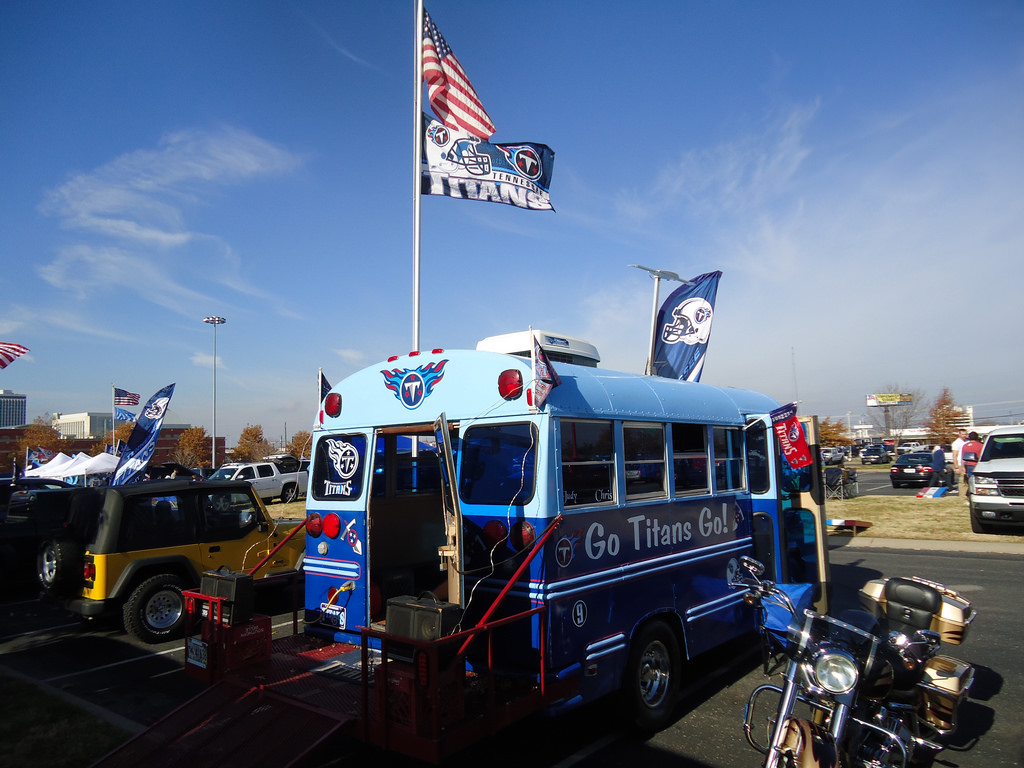 One Titans tailgating tradition is the playing of a game called Sholf. Sholf is a combination of golf and shuffleboard and is a lot of fun to play. Titans fans take sholf seriously and even have tournaments that last throughout the season. Forget about your traditional tailgate games like ladder ball and cornhole and get ready to play some sholf when tailgating before a Titans game. 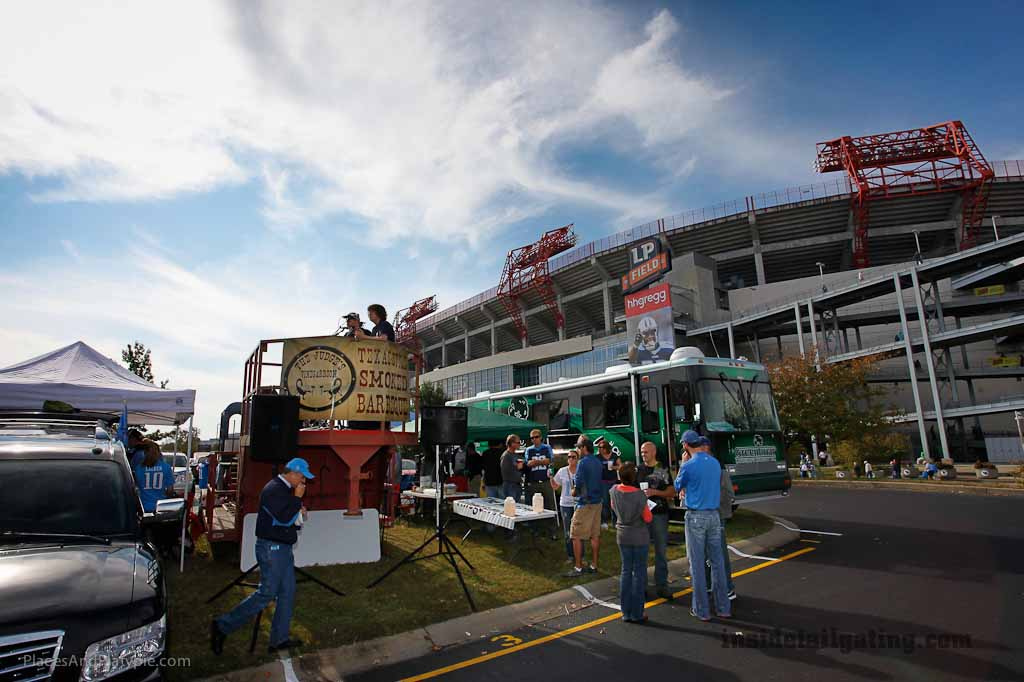 Much like barbecue, whiskey is also a Tennessee staple and nothing goes better with barbecue than Jack Daniels Whiskey. Make sure to visit the Jack Daniels Distillery inside Nissan Stadium, which offers a number of delicious whiskey based beverages and barbecue to enjoy while cheering on the Titans.

Looking to tailgate with a large group? No problem the Titans Tailgate Zone has got you covered. At the Tailgate Zone, you’ll be treated to a private tent, an all you can eat buffet, game tickets, and you’ll even have the chance to meet Titans cheerleaders and T-Rac. 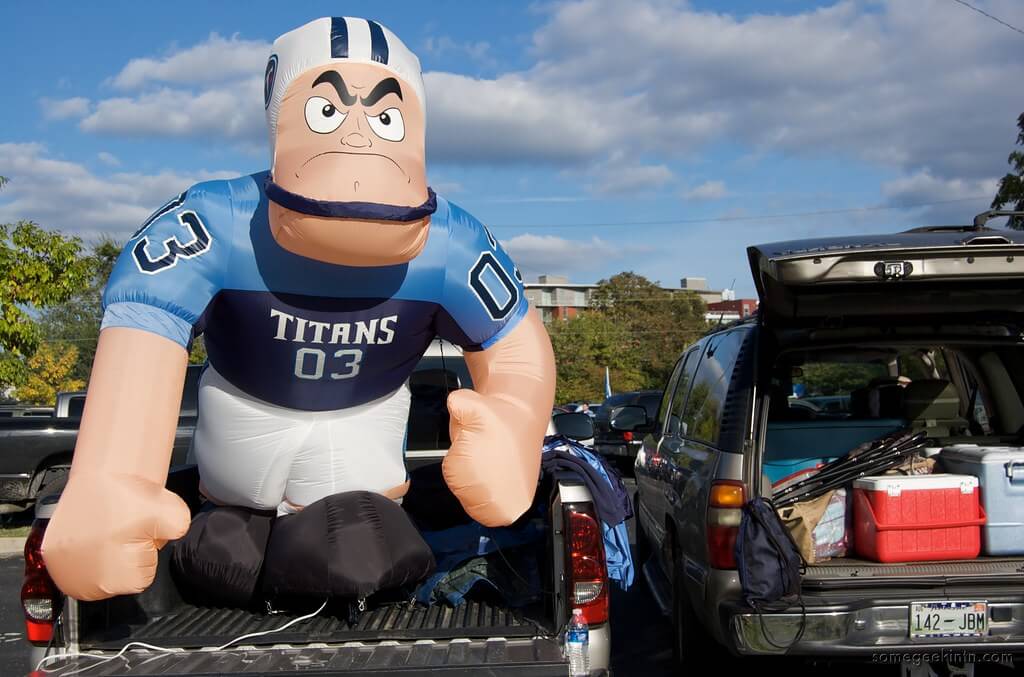 Not only are the Titans and Texans AFC South rivals, but the Titans also originated in Houston, as the Oilers, capturing the hearts and minds of Houstonians from 1960 to 1996. Many Texans fans still have bad taste in their mouths from the Oilers skipping town, so expect there to be a lot of passion both on the field and in the stands when these two AFC South rivals get together. 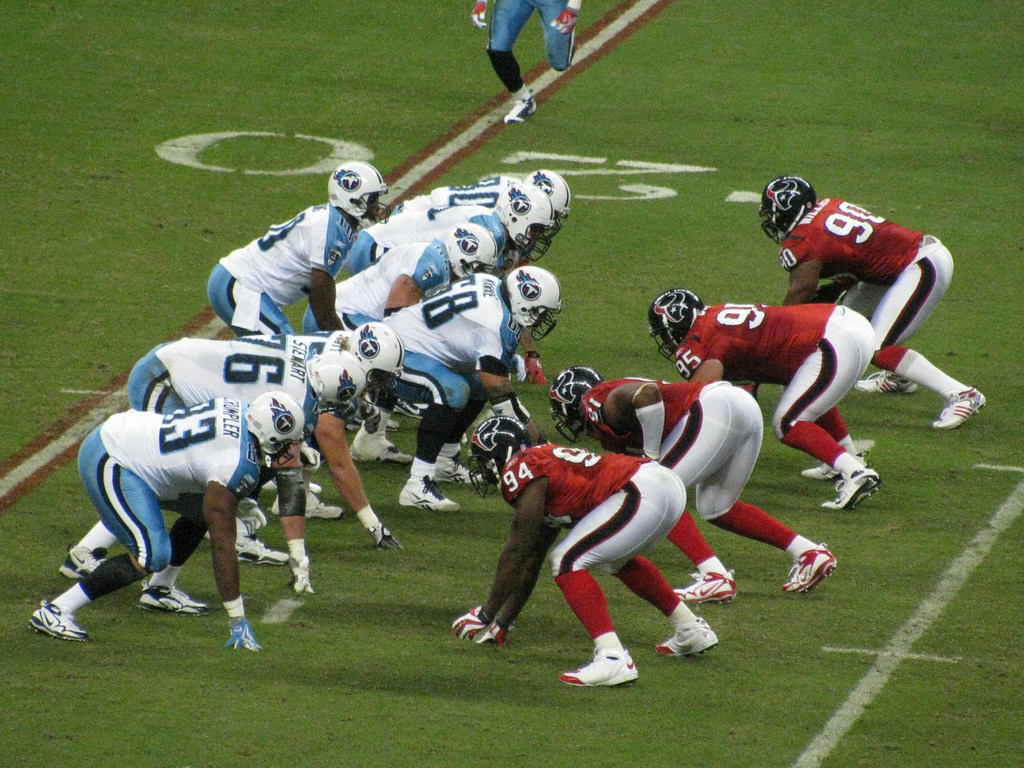 The atrium on the north end of Nissan Stadium features a deck that offers an amazing view of downtown Nashville. This is the perfect place to take a few photos to commemorate your Titans game day experience giving you lifelong memories you can share with all your friends and family. 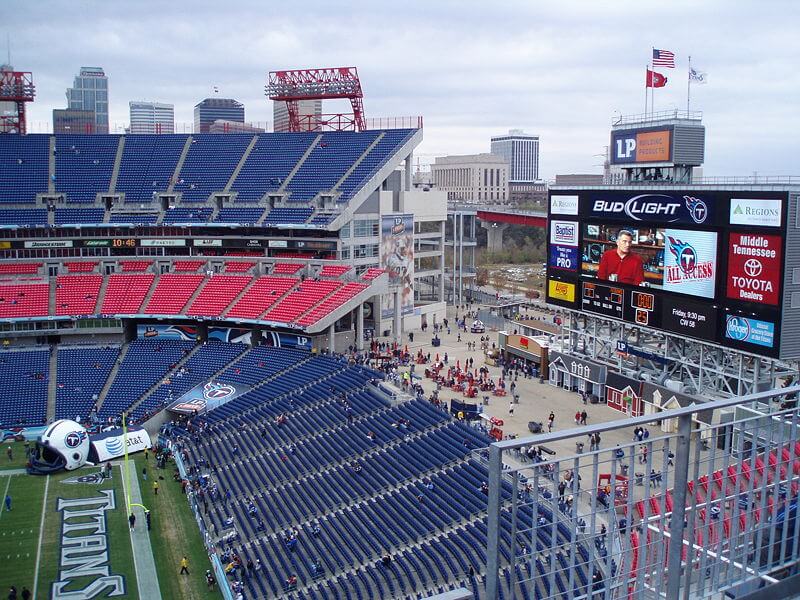 T-Rac the Titan’s raccoon mascot can be seen wandering the sidelines at every Titans home game. Throughout the game T-Rac will entertain and energize the crowd by performing a variety of antics, so keep your eyes peeled for this little scamp when attending a Titans game. 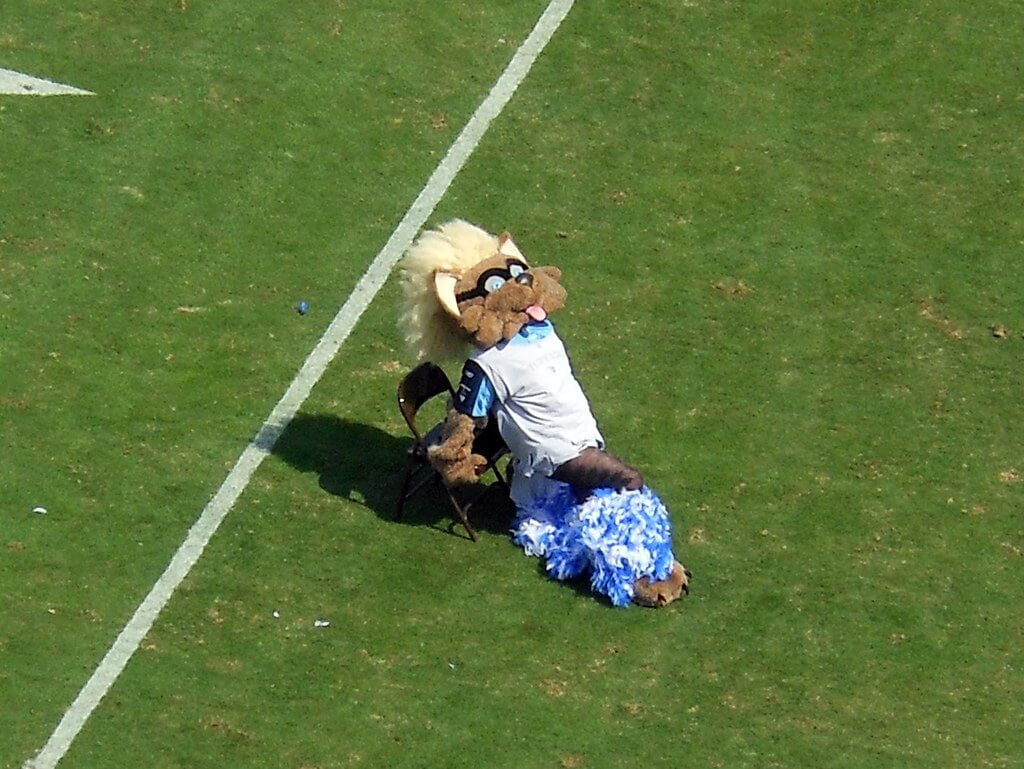