Super Frog can be seen throughout the game and is one of the biggest symbols of school spirit at TCU. This mascot spends his time interacting with the crowd electrifying the atmosphere of each home game. Being one of the more famous mascots in the NCAA Super Frog helps infuse team spirit on the field with his charm.

The Frog Horn is a 3,000-pound engine that belts out a 120-decibel train horn to celebrate touchdowns. The Frog Horn is another way TCU shows their love for the Horned Frogs. The practice of the Frog Horn intimidates opposing teams, adding to the home field advantage.

As we all know Texas can be quite hot, this usually occurs during the summer but can dip over into football season.  While most stadiums would just leave fans to deal with the heat themselves, TCU takes a more proactive approach.  On game day when the sun is beating down, the TCU staff have free ice towels to help keep fans cool.

The TCU – Baylor rivalry is one of the oldest in all of college football as the teams have been meeting on a regular basis since 1899. The rivalry is also one of the most tightly contested rivalries in college football with the Bears holding a slim 52-51-7 all-time lead. Both schools originally were located in Waco, Texas. However, today TCU is still only separated from Baylor by about 90 miles.

This area of the stadium consists of young Frog fans who are invited to line up near the south end zone and step onto the field before kickoff. When the Frogs run out of the south tunnel, the Creatures run alongside to the other end. TCU wide receiver Josh Doctson remembers running alongside his brother, pretending to be one of the players as a child. Check out the run here. 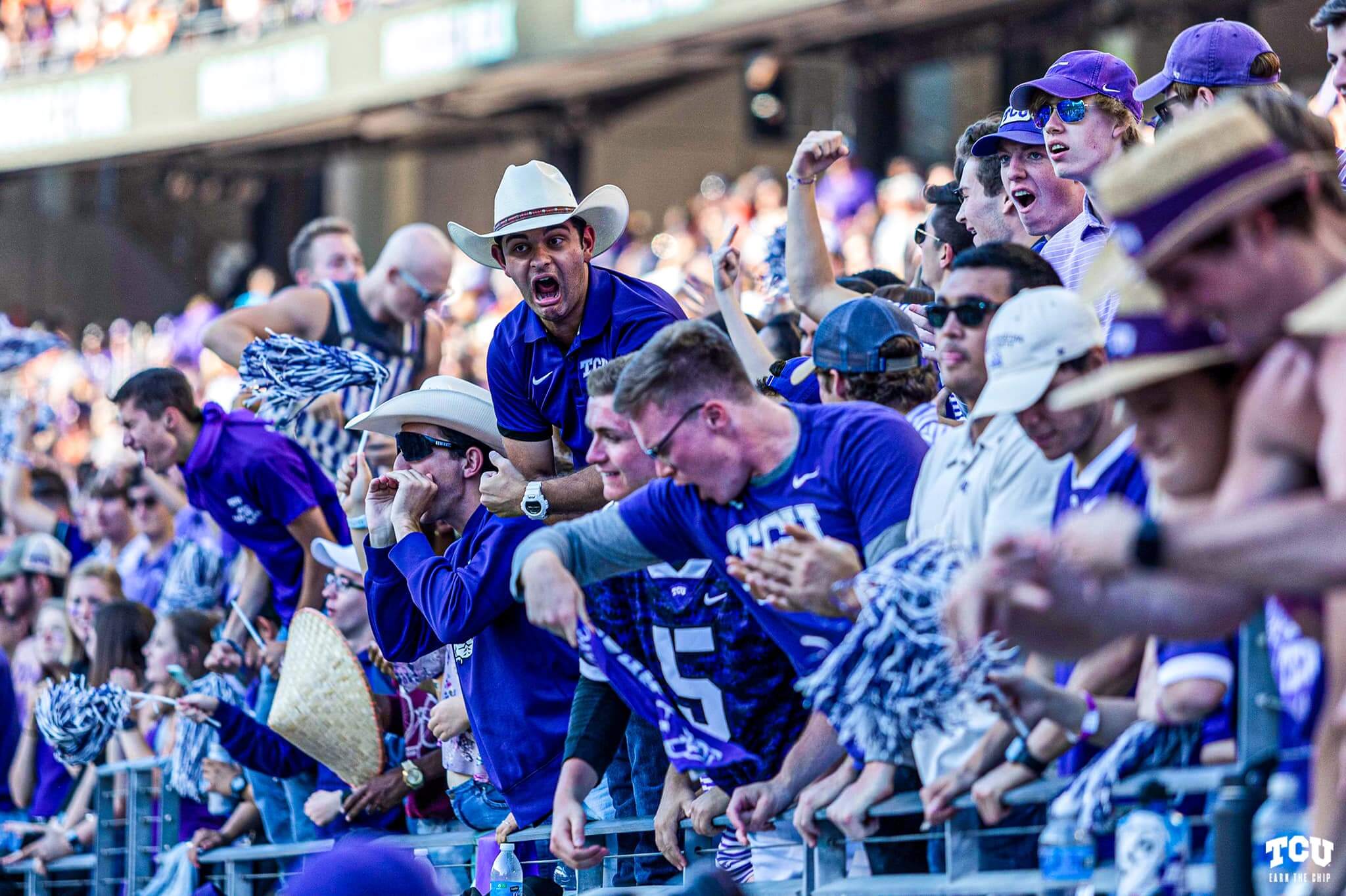 7. The Battle for the Iron Skillet

One of TCU’s biggest rivals is Southern Methodist University, which is also located in the Fort Worth area. While the origins of the story differ between the two schools, the rivalry is long running, and the two schools have played each every year except six since 1915. The winner of the game receives the ceremonial iron skillet and bragging rights over the Fort Worth area. 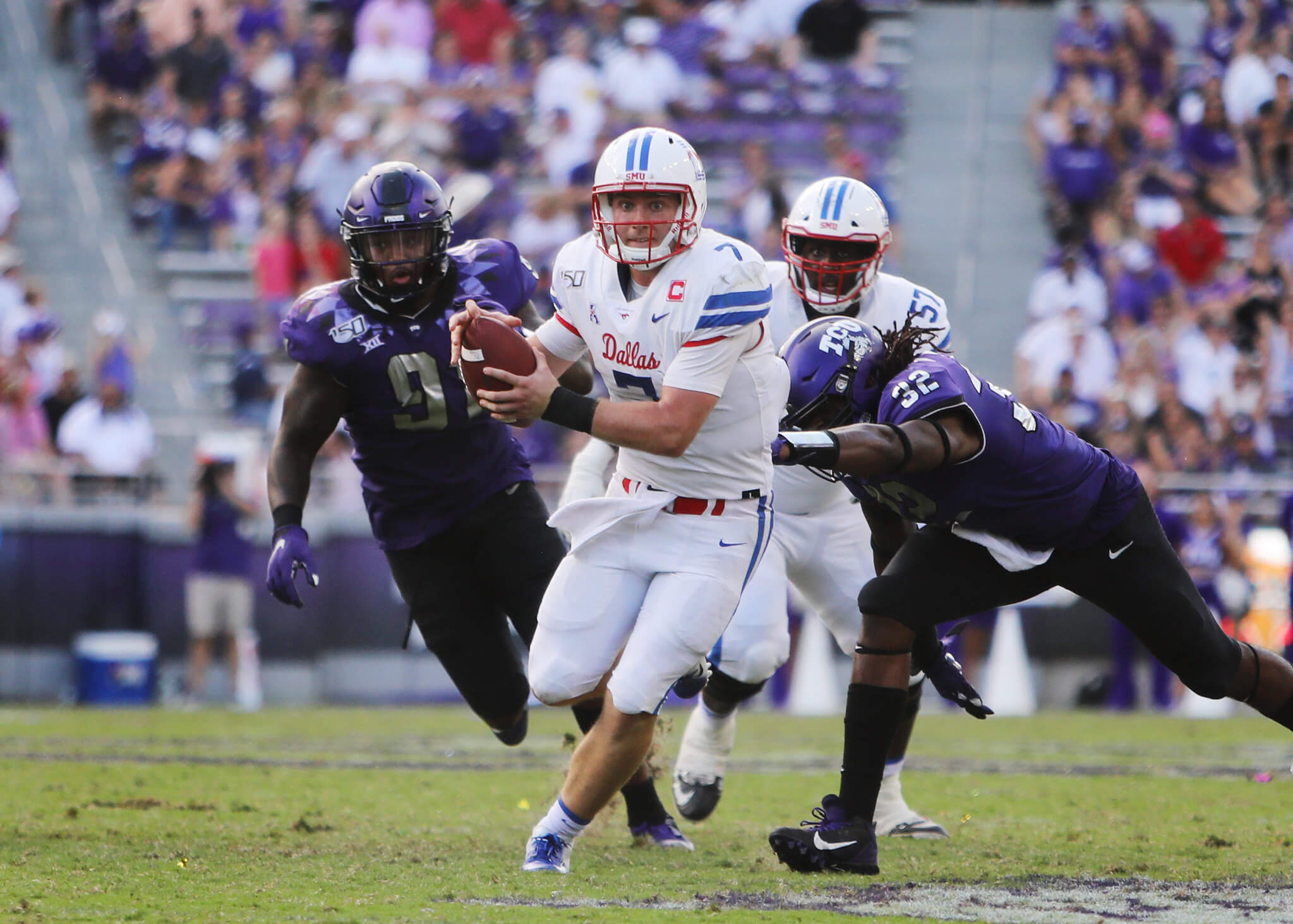 Since its inception in 1980, fans of TCU have been using the frog hand gesture to show their pride for the Horned Frogs. The sign is made by bending your index and middle finger at the knuckle. Show off your Horned Frog pride by throwing up a Frog hand sign to your fellow fans.

“Riff, Ram, Bah, Zoo/Lickety, Lickety, Zoo Zoo/Who, Wah, Wah, Who/Give ‘em Hell, TCU!” One of the oldest cheers in college football, the Riff Ram is a nonsensical cheer that unites TCU fans. Join in on this cheer to really feel a part of the crowd a TCU game.

Ex TCU Letterman John Marsh is at the helm of a 39-foot, two story smoker in Lot 3 of Amon G. Carter Stadium. They park it the night before a game and prep all night to serve the fans of TCU tailgating. Stop by the Lettermen’s Smoker for a one of a kind tailgate experience you can only find at TCU.