Home of the Navy Midshipmen

The name of each major naval battle is displayed in front of one of the seating sections at Navy-Marine Corps Memorial Stadium. They are presented in chronological order and are a great way to honor those who have served in the Navy. If attending a Navy game make sure to check out what section you’re and take a moment to remember those who served.

A grassy area in the north end zone provides a perfect place to sit and enjoy a Navy football game. The tickets for this section are general admission and will give you a great view of the action at a high price, so look for tickets in this section if you’re looking for a bargain.

The students at Navy games dress in full uniforms to attend games, which really shows off their pride and support for the Naval Academy. The students here are also very well behaved as they are held to the Navy code and as a result are very respectful in both victory and defeat.

After every touchdown, a cannon is fired, and the freshmen run to the end zone and do twenty push-ups. Other students also celebrate Navy scores by throwing their hats up into the air. Throw your hat up into the air when attending a Navy game to show your jubilation when the Midshipmen score.

The original wooden Tecumseh figurehead was salvaged from a shipwreck and given to the Naval Academy in 1866. However the bronze figure that currently stands on the Navy campus has been there since 1930. Before every game, Midshipmen throw pennies and give the figurehead a salute for good luck. If attending a Navy game make sure to perform this ritual to bring the Midshipmen good luck.

7. I Believe That We Will Win

This famous chant that can be heard throughout the country originated at the Naval Academy. The chant credited to Jay Rodriguez came to notoriety in 1999 during Navy’s 19-9 win over Army as Rodriguez’s friend and cheerleader Corey Strong led the crowd in a stirring rendition of the cheer. Today the cheer is a staple at Navy games and is heard late in games when a Midshipmen victory is imminent. Join in on the cheer as the Midshipmen march to victory. 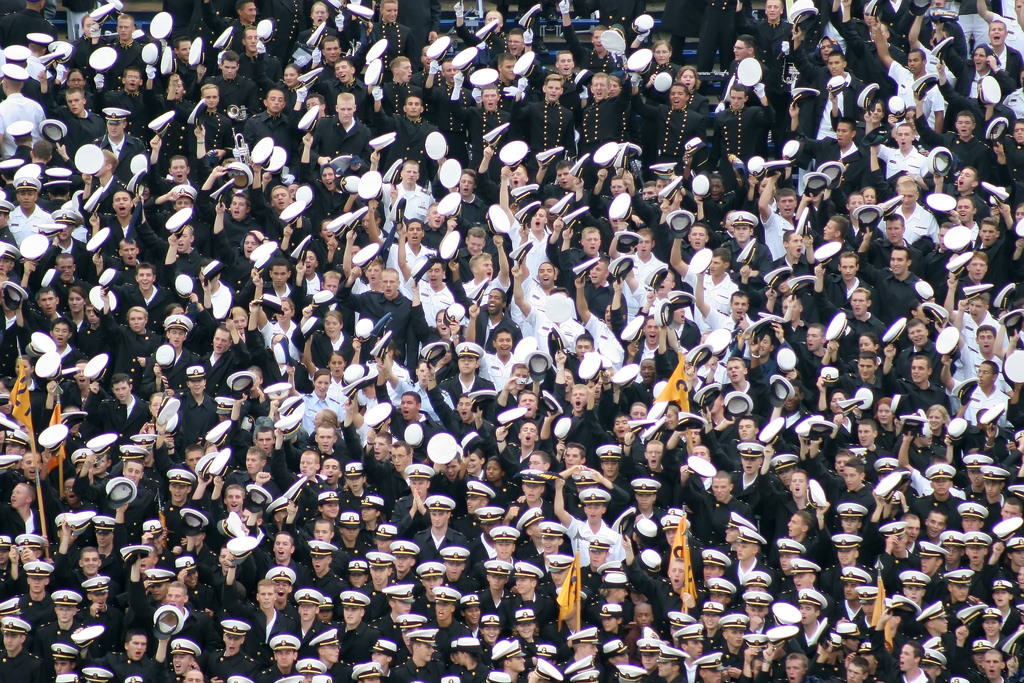 The Commander-in-Chief’s Trophy is awarded to the winner of the three-way rivalry between Army, Navy, and Air Force. While Army and Navy typically play on a neutral site, the Navy-Air Force matchup alternates between Annapolis and Colorado Springs, so if you want to see this matchup be sure to attend the game at Navy-Marine Corps Memorial Stadium on the first Saturday of October. The Midshipmen’s 17 victories are only three short of Air Force’s 20, so they’ll look to knot things up soon. 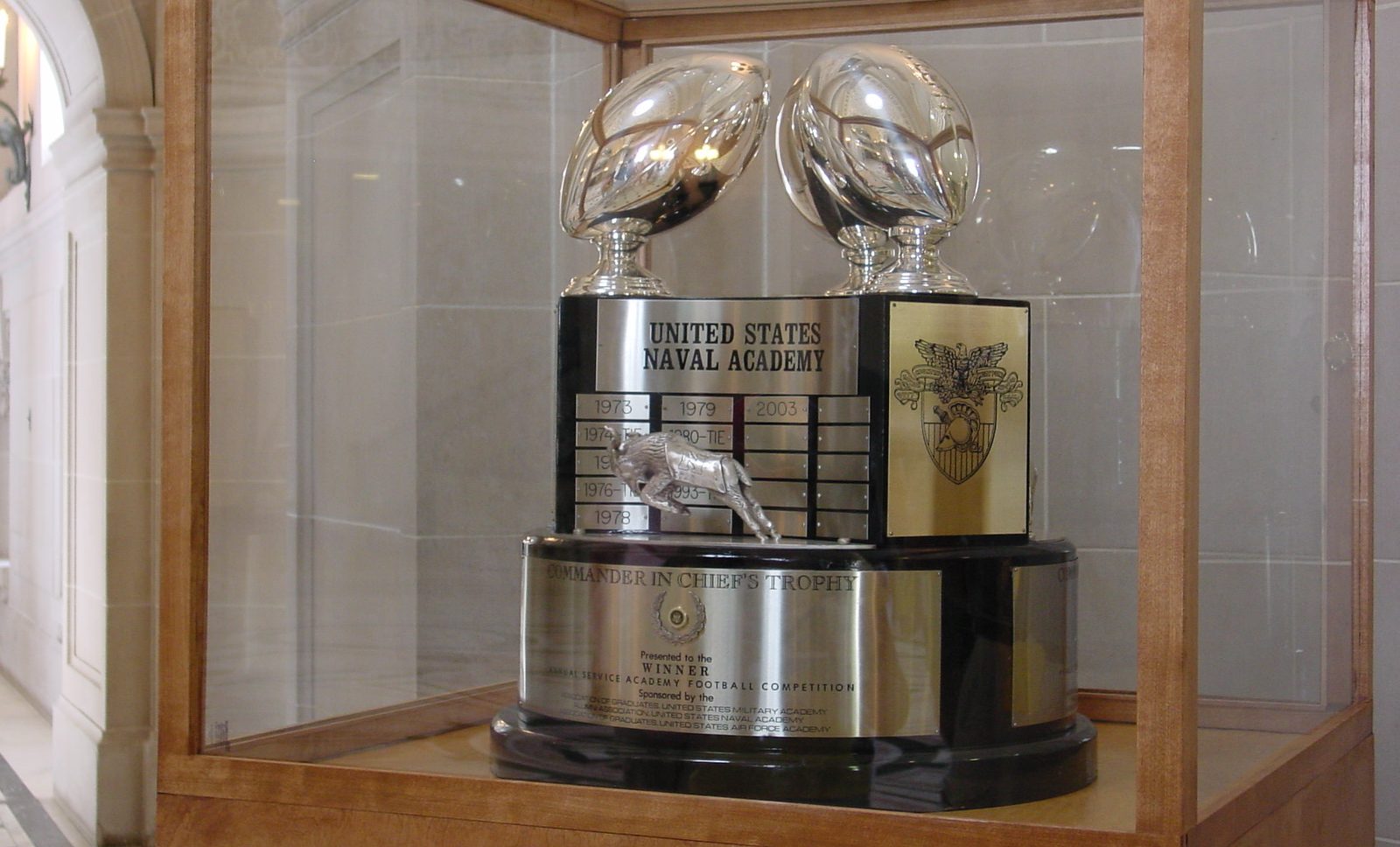 Notre Dame and Navy have met every year since 1927 when Notre Dame took down the Midshipmen 19 to 6. Unfortunately, victories have been few and far between for Navy since the 1960s as the Irish won every matchup from 1964 to 2006. Navy hopes to thwart Notre Dame’s four-game winning streak when these teams meet next.

The Enterprise Bell is rung during special ceremonies to celebrate the Midshipmen winning the majority of the sporting events against Army during a sports season. Make sure to attend one of these events if you want to celebrate beating Army with fellow Navy fans. 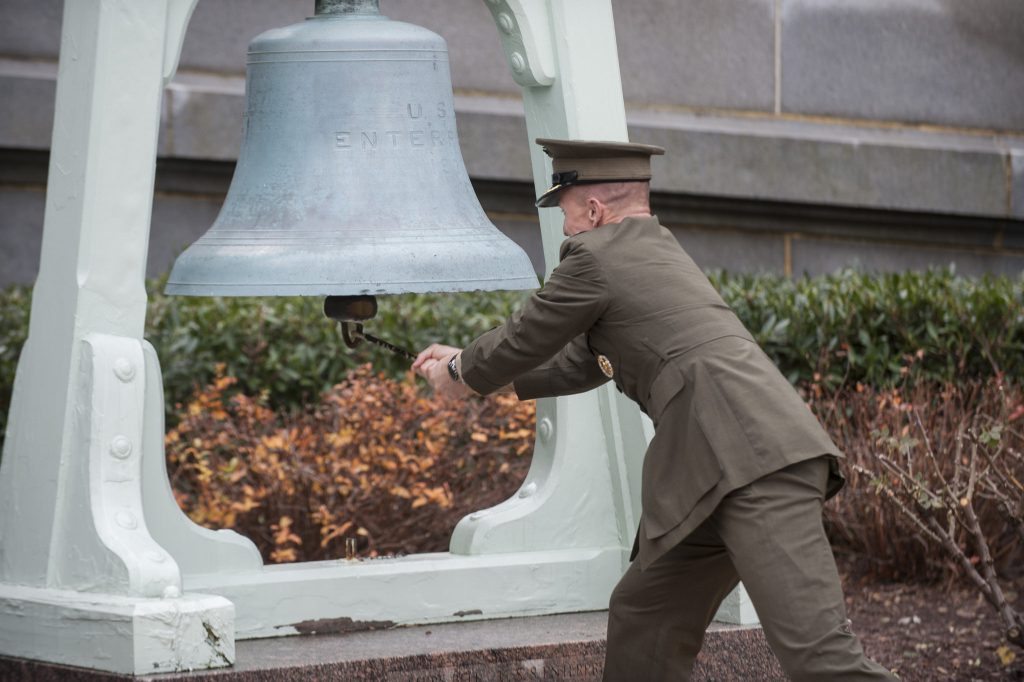