The University of Florida Gators play at Ben Hill Griffin Stadium, which is locally and popularly known as “The Swamp.” With their official seating capacity at 88,548, The Swamp is the 12th largest stadium in all of college football meaning you’ll be surrounded by plenty of friends when attending a Gators game. Inside Ben Hill Griffin Stadium you’ll enjoy an electric atmosphere as everyone comes prepared to get loud and cheer on the Gators on game day. You’ll also take part in plenty of Gator specific cheers while at a Gators game including everyone’s favorite Orange/Blue Cheer where half the stadium cheers ORANGE! And the other responds with BLUE!

It’s not just the incredibly loud and passionate fans who make taking in a game at The Swamp a must for college football fans, the history, and tradition of Florida Gators football also contributes to the outstanding game day experience found here. When attending a Gators game, you’ll be watching players perform on the same field that all-time greats like Danny Wuerffel and Tim Tebow used to call home. You’ll also get to be a part of many great Gators traditions like Mr. Two Bits and the singing of Florida’s alma mater “The Orange and Blue” after the game.

Despite its large size, The Swamp creates a surprisingly intimate atmosphere. The upper decks are still very close to the action, and you’ll find there are great sight lines all throughout the stadium. You won’t miss a minute of the action at a Gators game as Ben Hill Griffin Stadium is a beautiful stadium that provides a great view no matter where you are sitting.

The Swamp is the pride of the University of Florida and for a good reason; there is so much loyalty and tradition within the walls of the stadium, making it one of the best game-day experiences in all of college football. 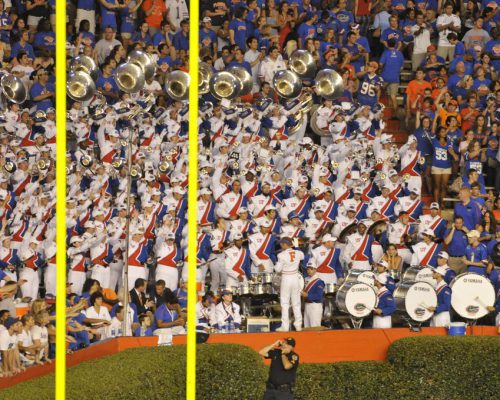 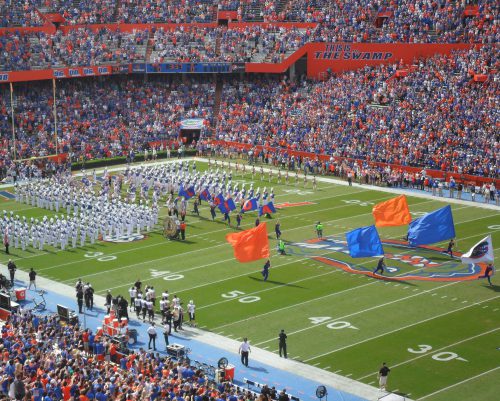 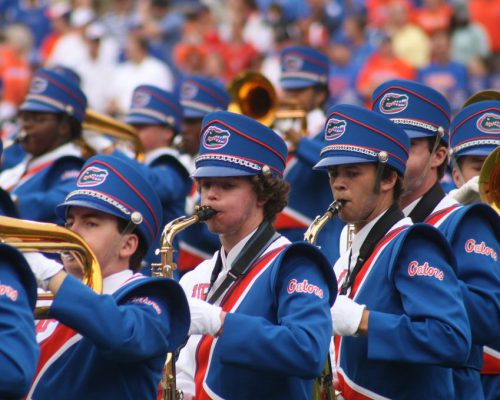 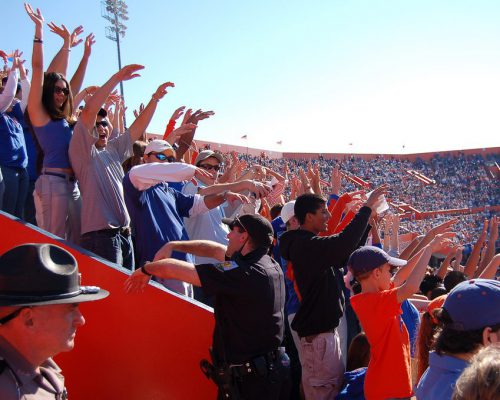 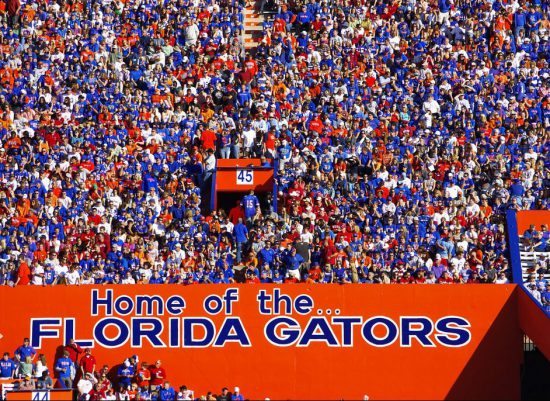 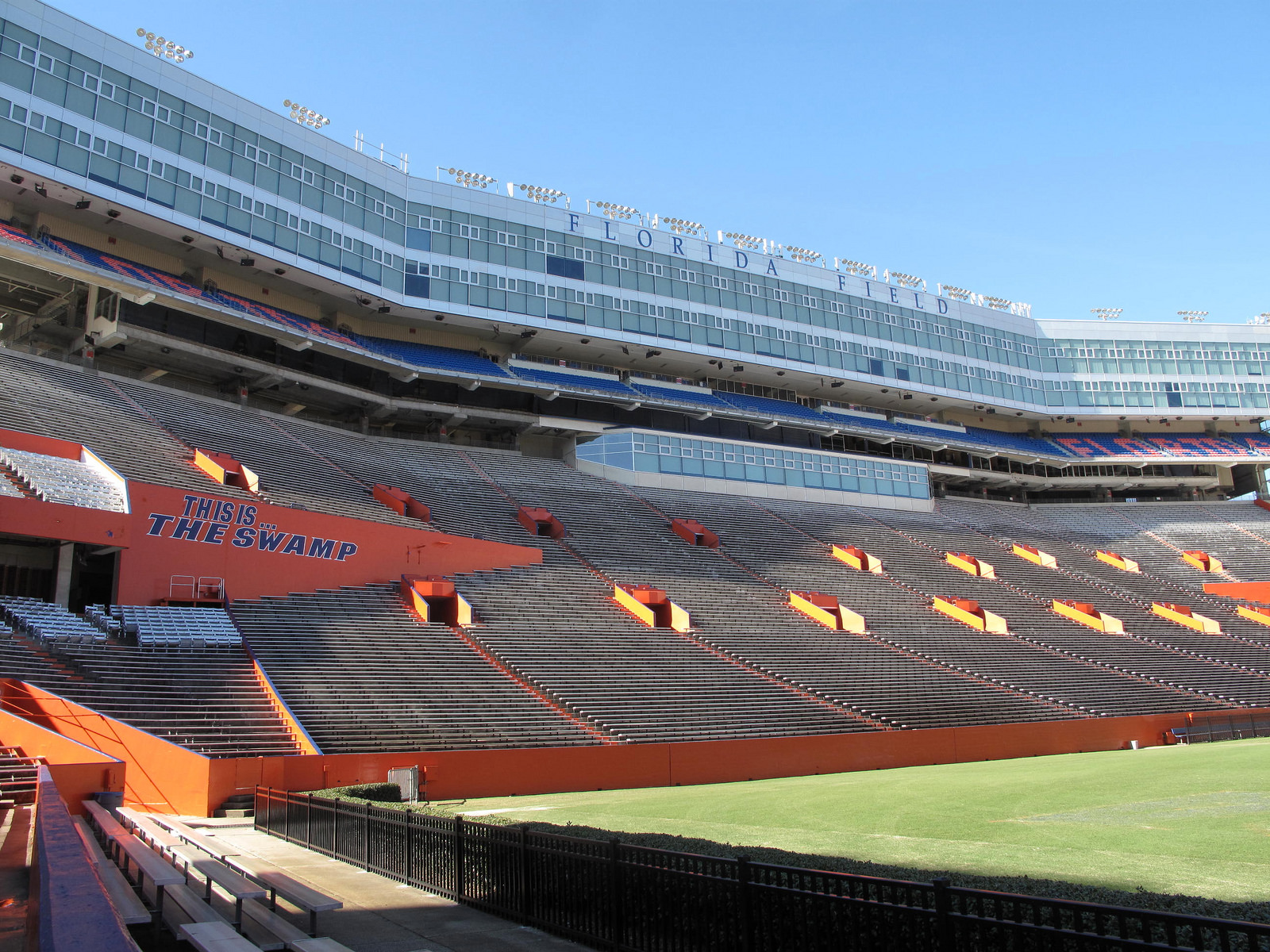 On each corner of the stadium are large and supportive messages for the Gators
“This is...THE SWAMP!”
“This is...GATOR COUNTRY!”
“Home of the...FLORIDA GATORS!”
“It’s Great To Be A Florida Gator” 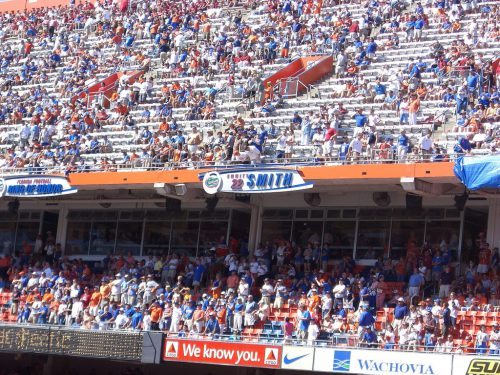 This area in the north end zone facade is dedicated to the greatest players and coaches in Florida Gators history, including Emmitt Smith and Steve Spurrier 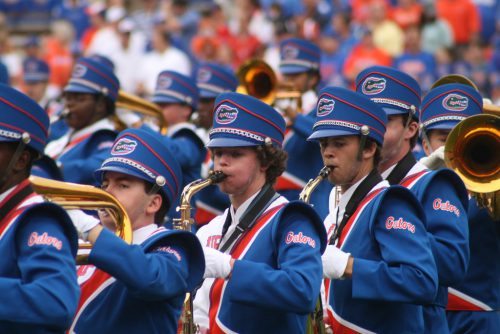 Pride of the Sunshine

The University of Florida marching band was the first in Florida and appropriately nicknamed the Pride of the Sunshine. The band performs on the field before kickoff and at halftime. They also play the instrumental version of their fight song The Orange and Blue after every Gator score. 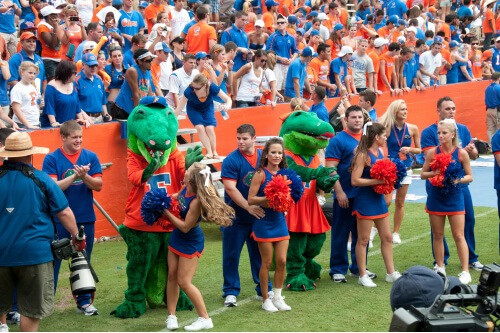 The Gators are unique in the fact that their mascot iss are a couple: Albert and Alberta are designed after American Alligators, a species common in Florida. 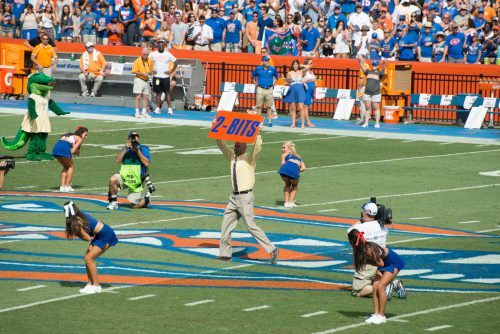 In 1949, Gator fan George Edmondson wouldn’t stand for the booing inside the stadium from fans, so he took it upon himself to rile up the crowd and got them cheering and hollering for the Gators. Decked out in a yellow oxford shirt, blue seersucker pants, orange and blue tie, and black and white saddle shoes, Mr. Two Bits was an integral part of Florida games. For sixty years, George would lead the crowd in cheering on the Gators, specifically with his trademark phrase “Two-bits, four-bits, six-bits, a dollar. All for the Gators, stand up and holler!’ In his honor, a new tradition was created in the 2013 season to commemorate his spirit and loyalty: Gator Greats are introduced each week as the celebrity two-bits to keep his legacy alive 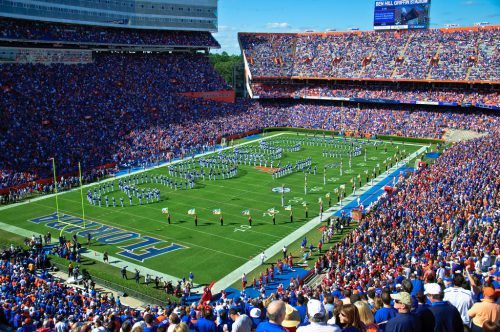 We Are the Boys from Florida

At the end of the third quarter, fans sway by rows while singing We Are The Boys From Florida, as the University of Florida was formerly all male. 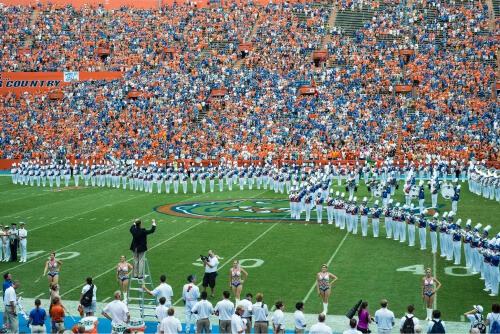 Singing After the Game

Fans and players will sing together the University of Florida’s Alma Mater at the end of home games and in 2005 added singing “The Orange and Blue” after victories.