Originating in 1981, the “Gator Chomp” is a gesture made my Gators fan to show support for UF sports teams. It is performed by extending both arms out to each other with the palms facing each other to symbolize a gator mouth. When performed at the games, the marching accompanies it with the two-note shark motif from Jaws.

The “Gator Walk” is an exciting pre-game tradition that allows fans the chance to get up close to their favorite Gators. The team buses in and get off right outside the stadium as they enter the stadium a tunnel of adoring fans takes pictures and receives autographs. This is something that any Florida fan has to experience at least once.

One of the greatest moments in all of college football is the end of the third quarter when all of the fans stand and sing “We are the Boys” while swaying back and forth, arms around each other. This is a tradition at the University of Florida and is truly a treat to witness.

Make your way over to the Heavener Complex, connected to the stadium, to lay your eyes on college football’s prized possession, a crystal National Championship football. And it’s not just one, but three! Take a look at what every team fights so hard for with video and pictures from the championship seasons of past. 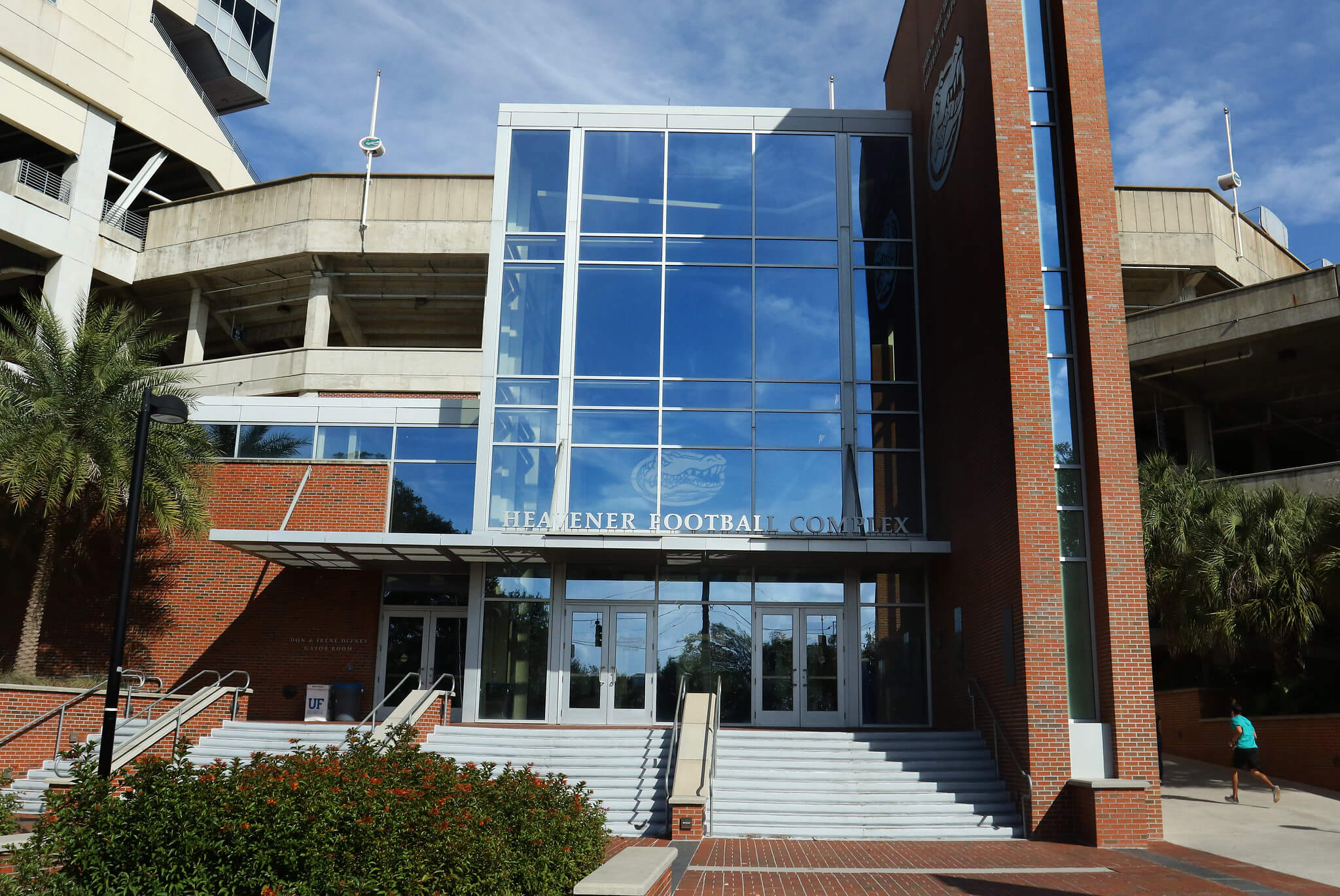 Outside the west side of the stadium is three life-size bronze statues commemorating the Heisman Trophy winners who played at Florida. They are Steve Spurrier, Danny Wuerffel, and Tim Tebow. Make sure to check these statues out to remember some of the greatest players in Gators history.

The Gators are unique in the fact that their mascots are a couple: Albert and Alberta are designed after American Alligators, a species common in Florida. Look for this pair to provide great entertainment during stoppages in play. 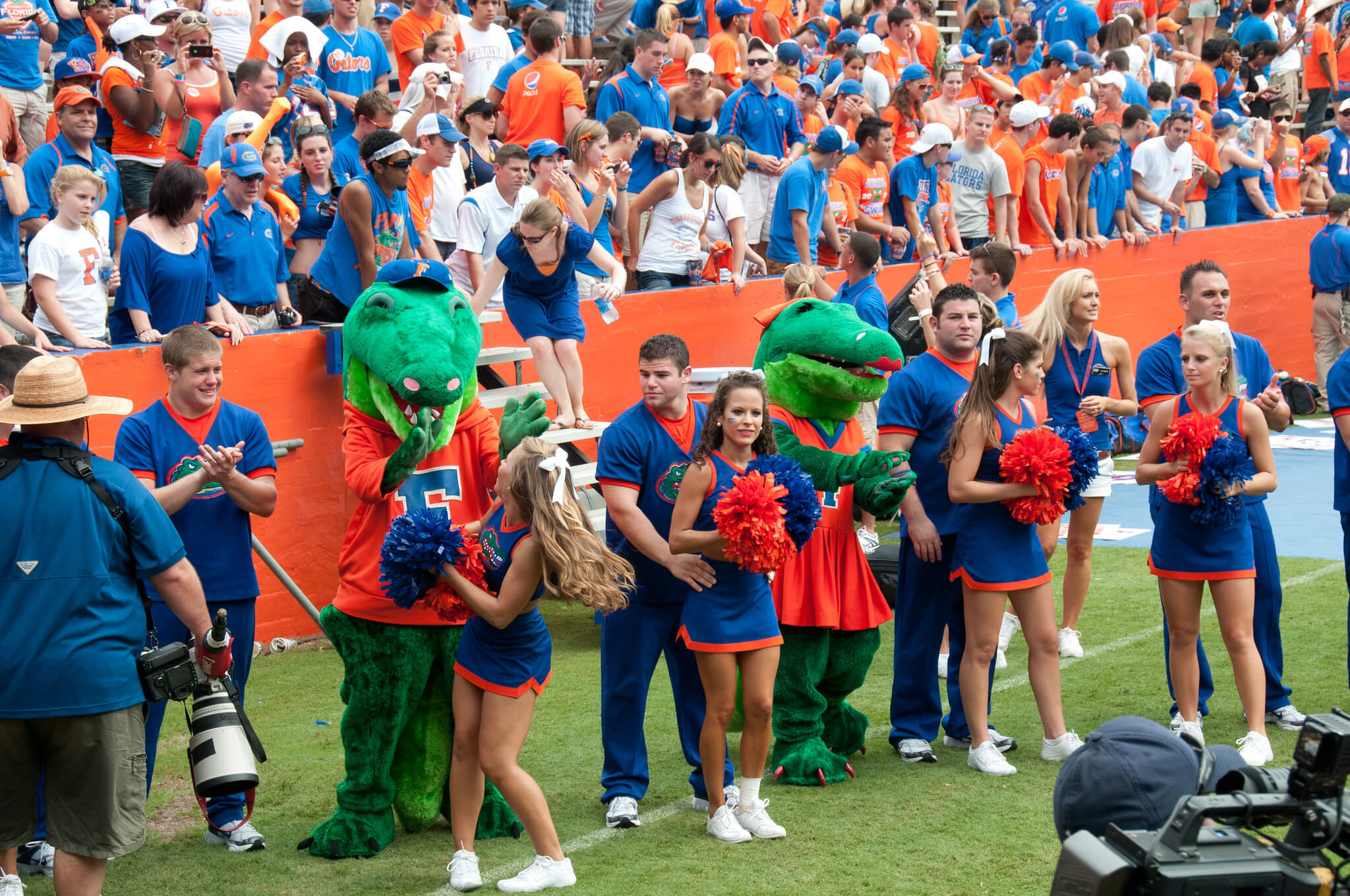 In 1949, Gator fan George Edmondson wouldn’t stand for the booing inside the stadium from fans, so he took it upon himself to rile up the crowd and got them cheering and hollering for the Gators. Decked out in a yellow oxford shirt, blue seersucker pants, orange and blue tie, and black and white saddle shoes, Mr. Two Bits was an integral part of Florida games. For sixty years, George would lead the crowd in cheering on the Gators, specifically with his trademark phrase “Two-bits, four-bits, six-bits, a dollar. All for the Gators, stand up and holler!’ In his honor, a new tradition was created in the 2013 season to commemorate his spirit and loyalty: Gator Greats are introduced each week as the celebrity two-bits to keep his legacy alive.

9. Pride of the Sunshine

The University of Florida marching band was the first in Florida and appropriately nicknamed the Pride of the Sunshine. The band performs on the field before kickoff and at halftime. They also play the instrumental version of their fight song The Orange and Blue after every Gator score. The band provides great entertainment all on their own so be sure to stay in your seat at halftime so that you won’t miss any of the action.

10. Singing After the Game

Fans and players will sing together the University of Florida’s Alma Mater at the end of home games and in 2005 added singing “The Orange and Blue” after victories. Be a part of this great tradition by learning the words to both the school’s alma mater and “The Orange and Blue.” 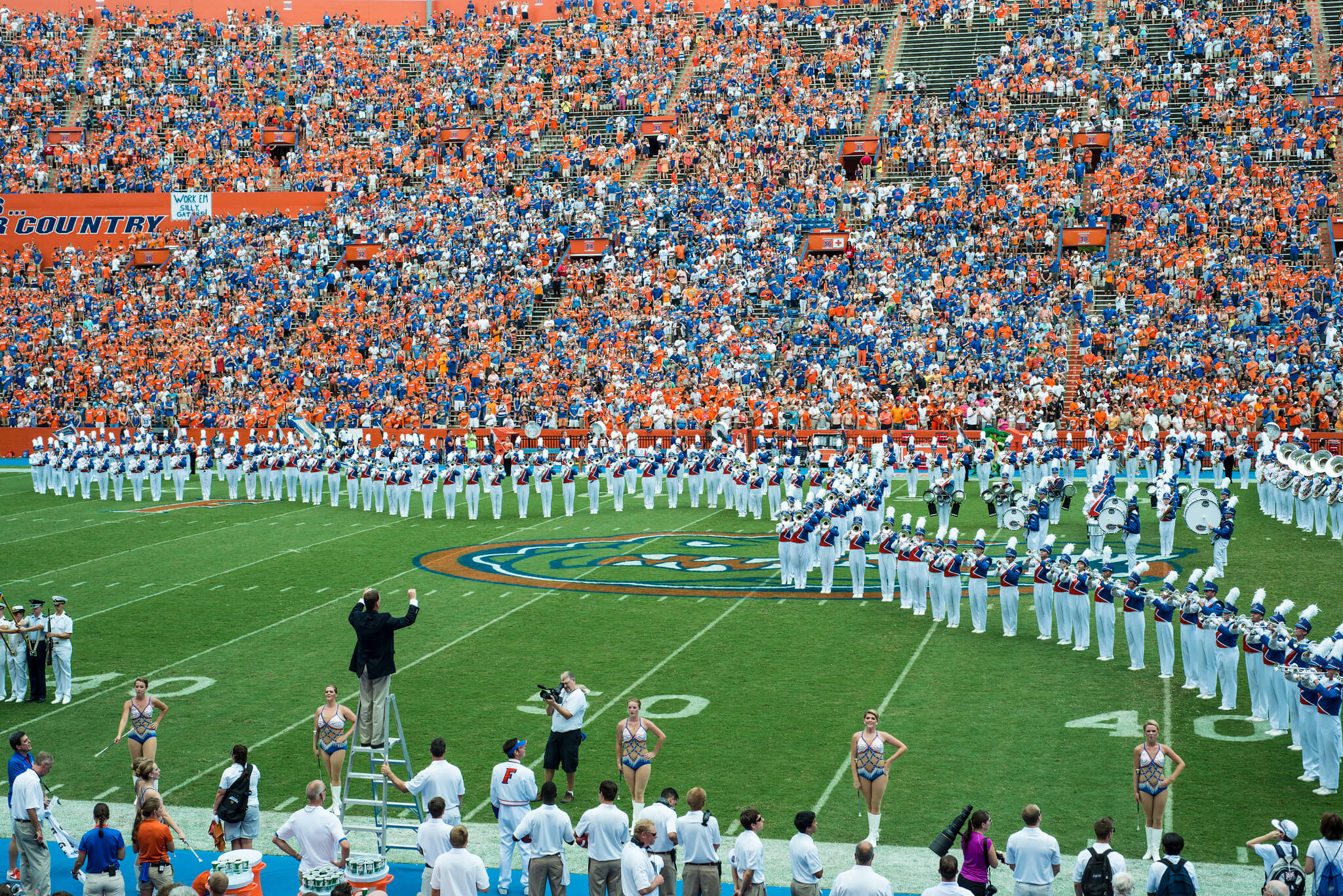