Home of the Louisville Cardinals

One unique Cardinals football traditions is the victory lap. After every win, the players walk around the field and give a high-five to every fan. The tradition began at the end of the 1990 season and had been going strong ever since as it provides a great way for the players to show their appreciation to the fans.

Before every home game, the Cardinal mascot parachutes into the stadium. Not only is this a great way to get the crowd pumped up, but it also signals to the tailgaters outside the stadium that the game is about to start. Look for the parachuting bird to make sure you don’t miss any of the action.

Johnny Unitas is the greatest player to have ever played for the Cardinals and as such he has been immortalized by a statue that sits in the north end zone right outside the Schnellenberger Complex. Before games, Cardinal players rub the statue for good luck. Make sure to check out this statue commemorating one of all time greats when you attend a game at Papa John’s Cardinal Stadium.

The Card March allows fans to give their team that lasts little bit of inspiration before they take the field. About two hours and 15 minutes before the game the team gets off the bus at Floyd Street and marches to Gate 4 as they are cheered on by adoring fans. If you want a chance to get up close and personal with Louisville players and coaches, make sure to get to the game early and find a spot for the Card March. 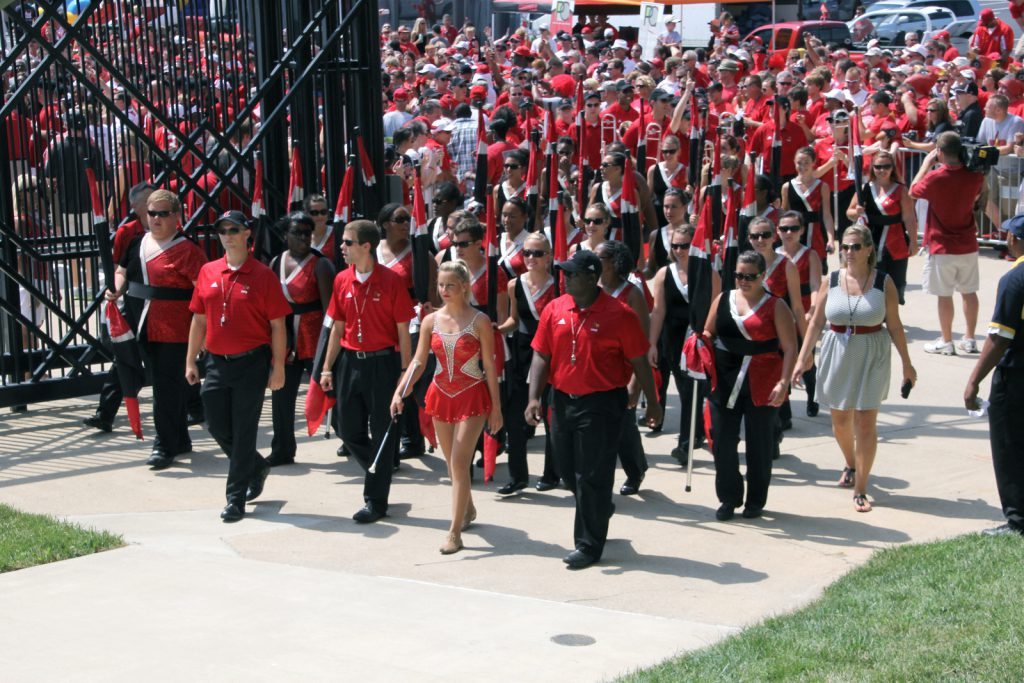 Louisville and Kentucky play each year for the Governor’s Cup. The two schools first met in 1912 when the Wildcats shut out the Cardinals 41-0. The Governor’s Cup, however, did not become a regular rivalry until 1994 when the trophy was introduced. The Cardinals have fared much better since the introduction of the trophy in 1994, but they still trail the all-time series 13-14. The Cardinals will hope to tie the all-time series when the two schools meet this year and will look to overtake the Wildcats in the coming years. 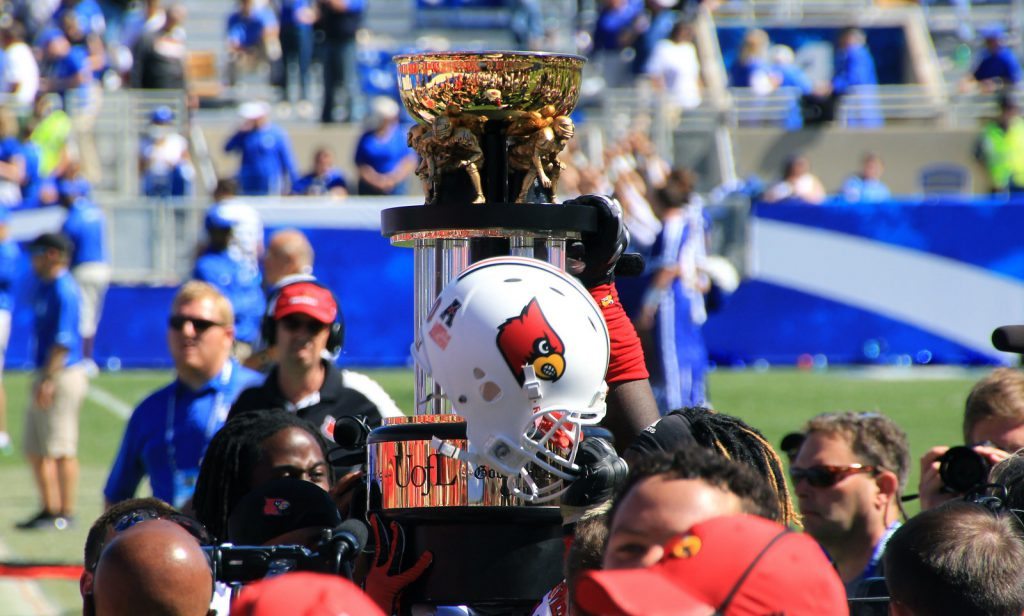 A train whistle is blown in celebration of each and every Cardinals score. The whistle originated due to the school’s proximity to the railroad tracks and had become a mainstay over the years. Get ready to hear this whistle often as Louisville runs up the score on the opposition. 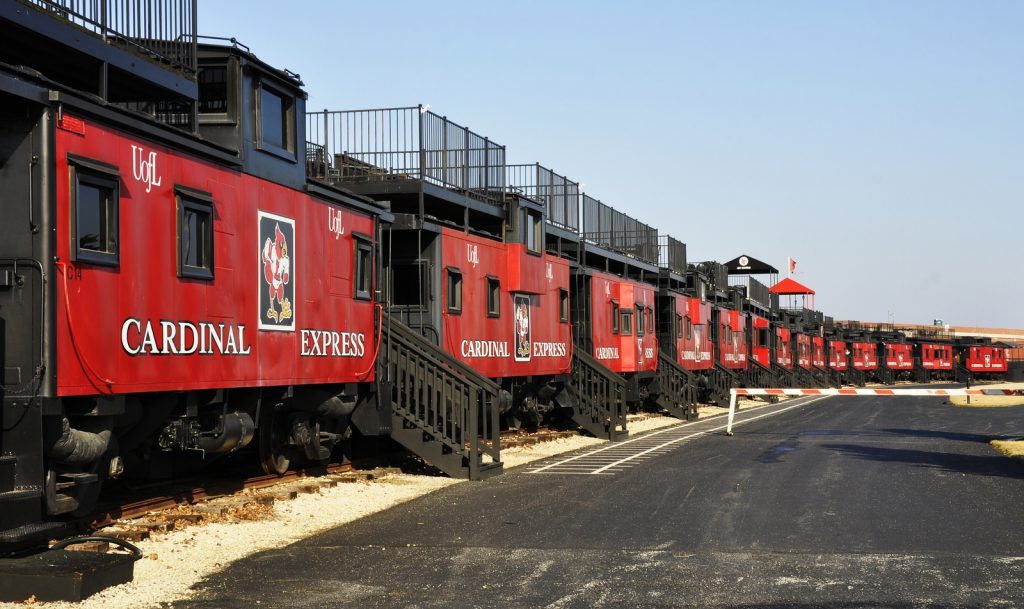 Both the cheerleaders and dance squads at Louisville are critically acclaimed as the cheerleading squad has won 15 national titles, while the dance squad known as the Ladybirds are no slouches either having cemented seven national titles of their own. The football game isn’t the only show on display at Papa John’s Cardinal Stadium as these two squads are sure to put on quite a performance of their own.

The University of Louisville’s Red Rage Marching Band plays each and every Cardinals home game. They much like the cheer and dance squad are quite the accomplished group as not only have they made appearances on ESPN, ABC World News Tonight, and even Oprah. They are also the band that has been chosen each year to play My Old Kentucky Home at the Kentucky Derby. Keep your eyes and ears open during halftime as you don’t want to miss the Red Rage Marching Band.

One of the best ways to show off your school spirit is through Louisville’s “L” hand signal. To make this signal just stick your right thumb out while raising your index and middle finger. This hand signal is an excellent way to show off your Cardinals pride, and if you use it often, you’ll make friends quickly at the game. 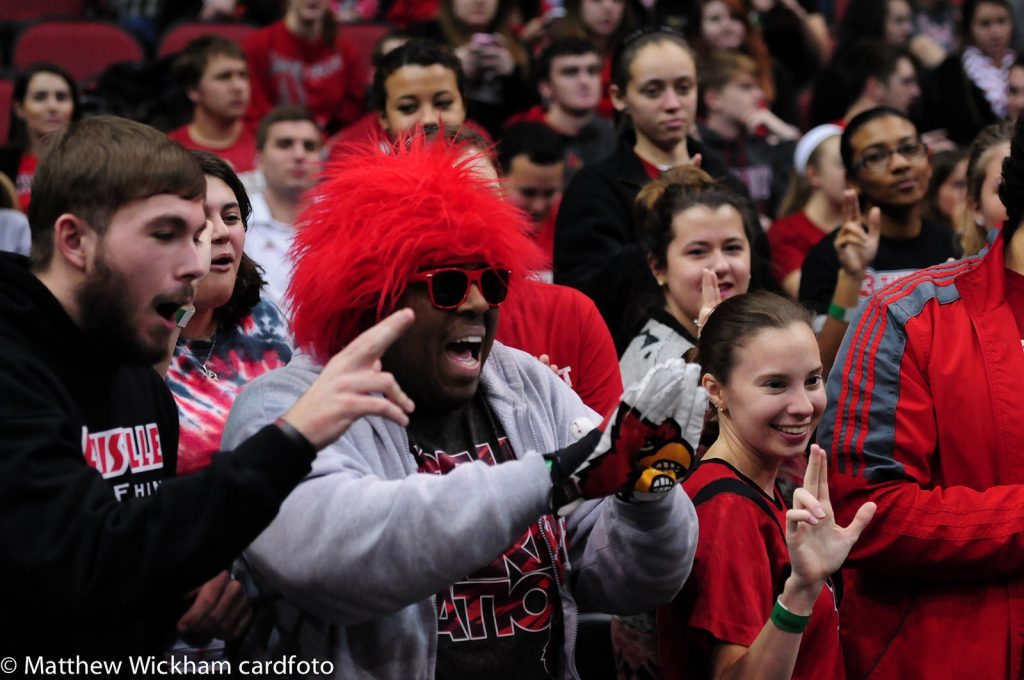