Home of the Michigan Wolverines

Michigan Stadium, affectionately referred to as the Big House, has the largest stadium capacity of any college football stadium in the country. The crowd at Michigan Stadium on game days is so large that when in the stadium on game day you’ll be part of the 4th largest city in the state. The chance to see a game at the Big House alone will make your trip to Ann Arbor worthwhile for you and your buddies. 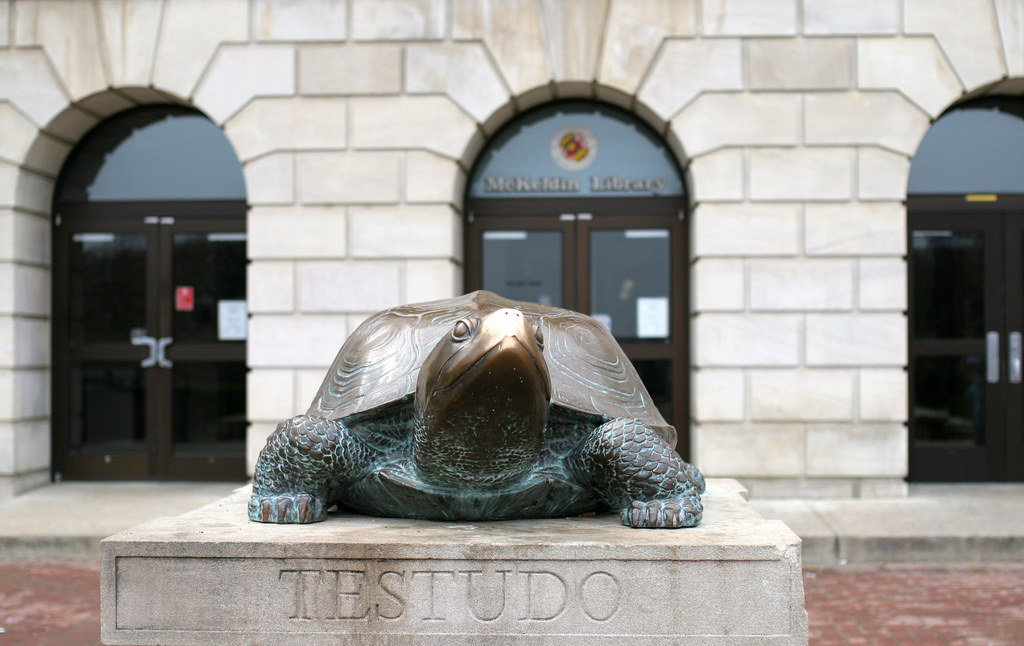 2. Hail to the Victors

One of the most iconic fight song in all of college football. You’ll never forget this song after just one game at the Big House. There is also a customary fist pump at every “HAIL” and two fist pumps at “GO BLUE” in the song that the whole crowd will do as the marching band plays this song. 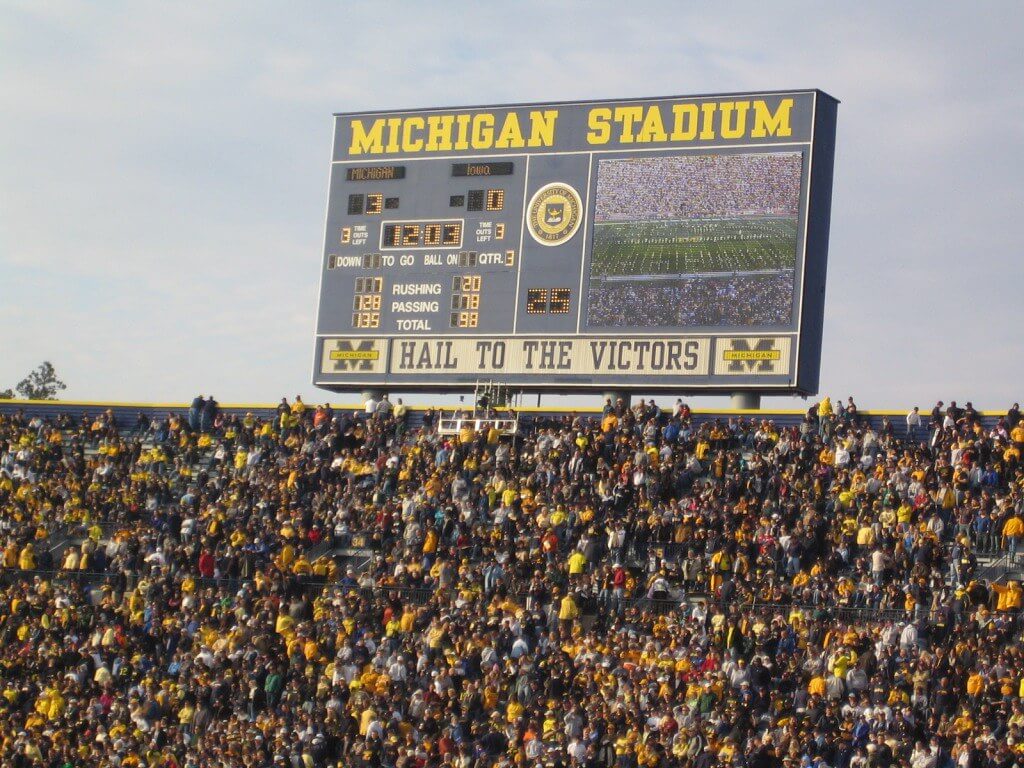 The newly renovated Towsley Family Museum inside Schembechler Hall is the place to be for U-M football fans. The state-of-the-art facility links Maize & Blue history with modern technologies for an experience like no other! 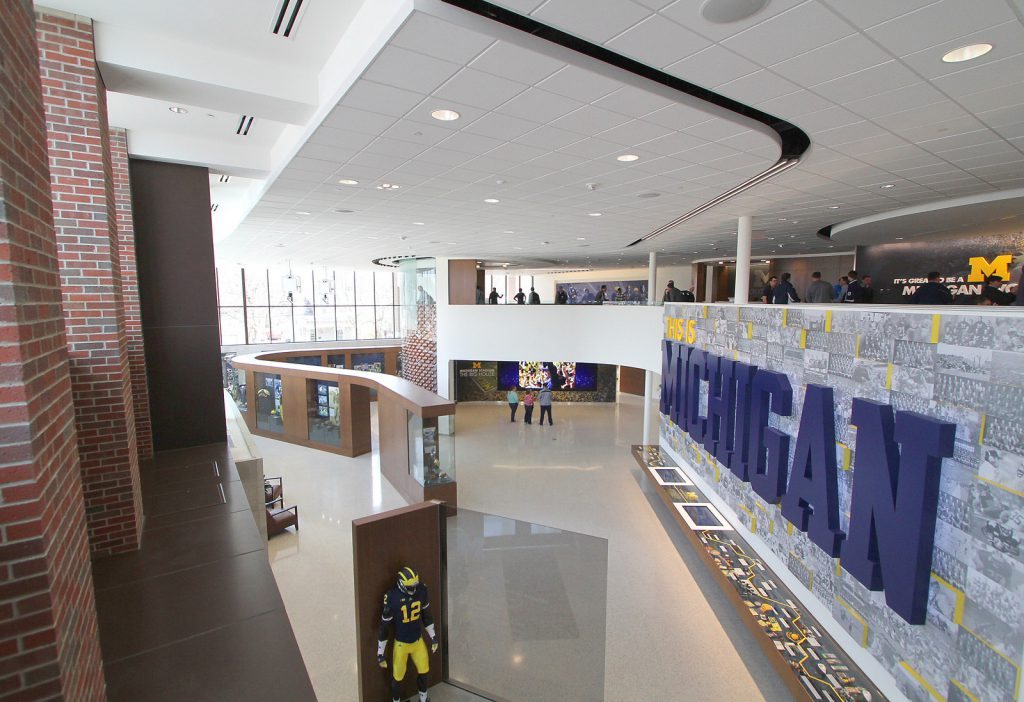 Before every game, the players run out onto the field at the 50 yard line. On the way out every player will try and touch the banner as they enter the field. It’s done to give the Wolverines a little bit of extra luck and has been very successful over the years as the Wolverines have the most wins in the history of college football. 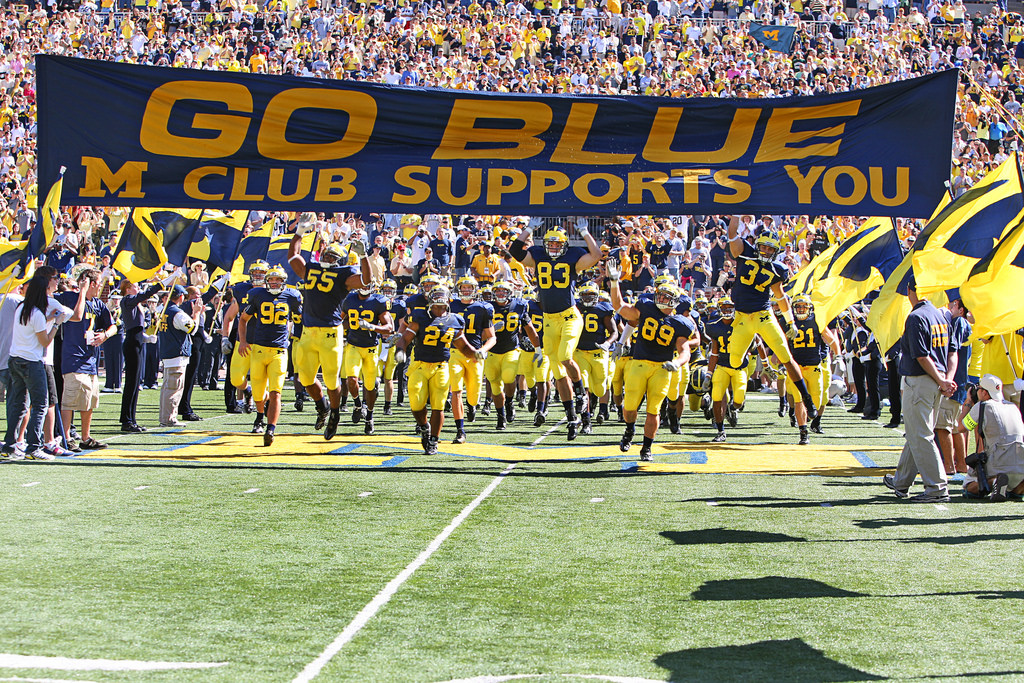 The Block M-Formation is a game day staple at Michigan. The iconic routine is part of the marching band’s pregame performance and takes place right as the band enters the field at the 50-yard line. Make sure to get to your seat early so that you can take in this great pregame tradition. 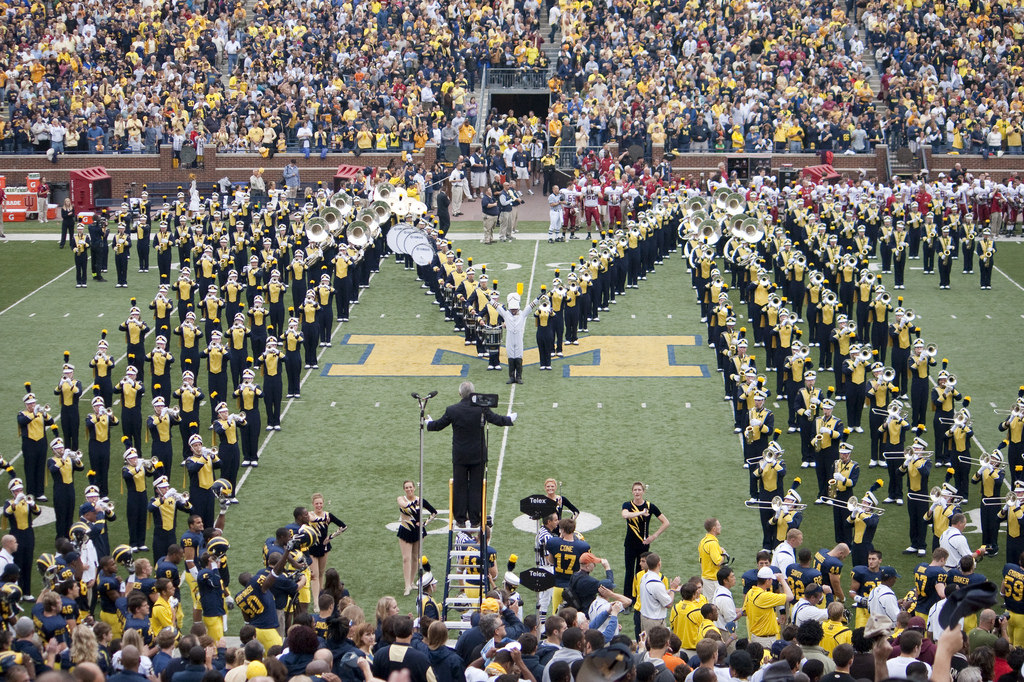 Two hours before the game the coaches and players make a 200-foot walk to the stadium. Stop by to cheer on the Wolverines and give them a little bit of extra encouragement before the game starts. 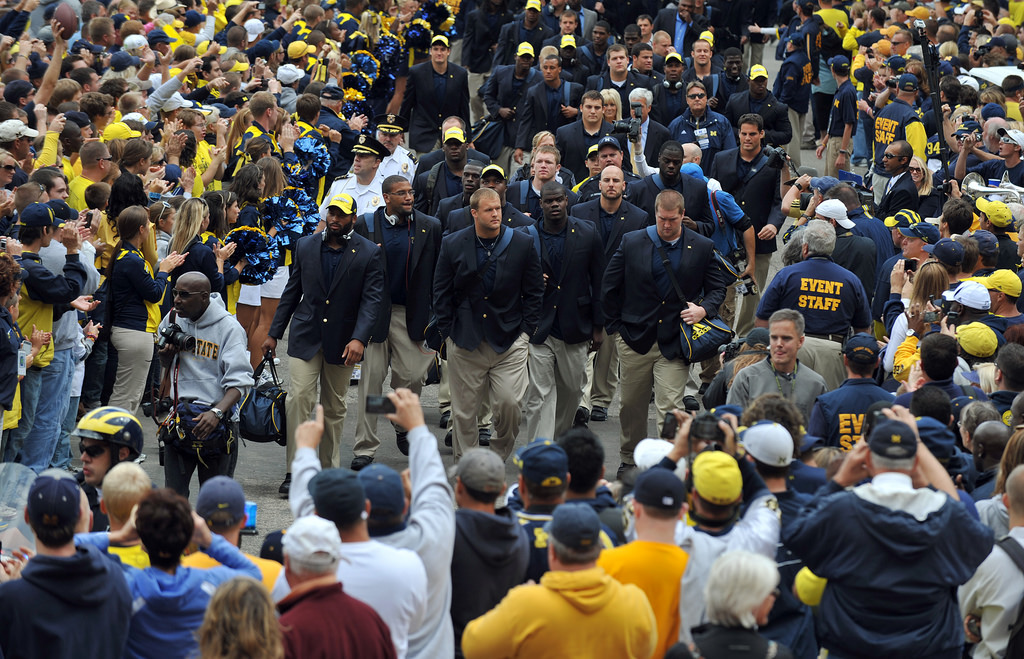 Depending on who you ask, The Michigan – Ohio State rivalry is the biggest rivalry in all of college football and maybe all of collegiate athletics. The two teams have met 111 times with the first meeting taking place in 1897. Michigan currently holds the series lead 58-46-6 and will look to expand on it in the coming years. The rivalry has gained significant traction over the past forty years due to it normally determining the Big Ten Conference champions, which it has done 22 times. The game has even had National Championship implications as in the past both teams have come into the game with National Championship in their grasp. 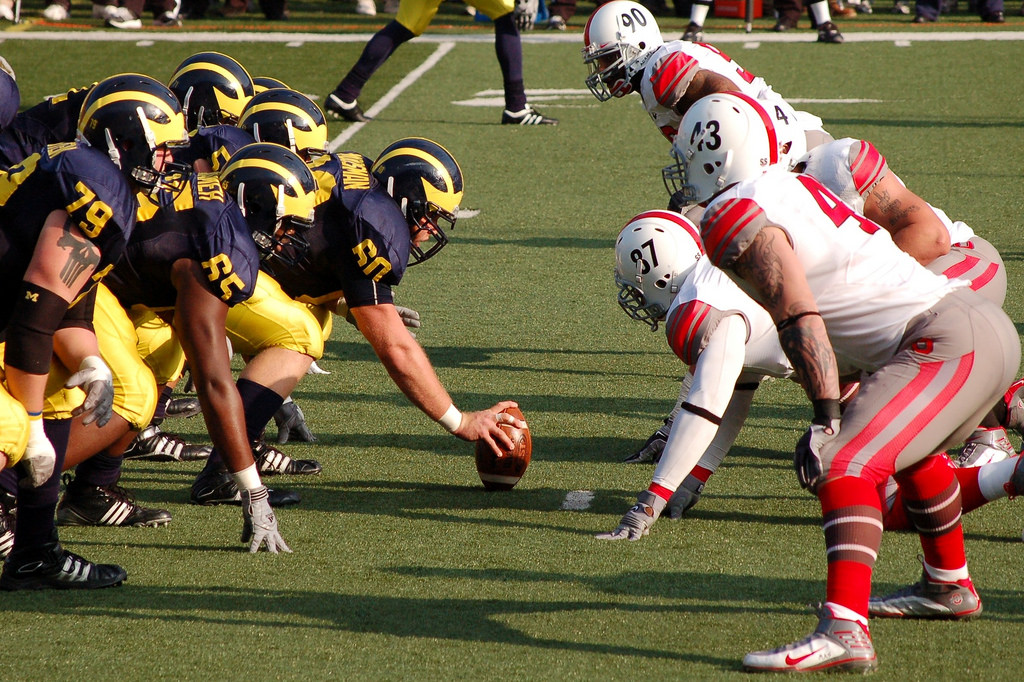 The winged helmet may have to be born at Princeton, but it became world famous at Michigan where the team has worn it since 1938. The design was brought to Michigan by legendary Wolverines head coach Fritz Crisler, who introduced the design to aid his team’s passing game. You’ll be in for quite the treat as you’ll be able to see Michigan’s famed winged helmets in person when in Ann Arbor. 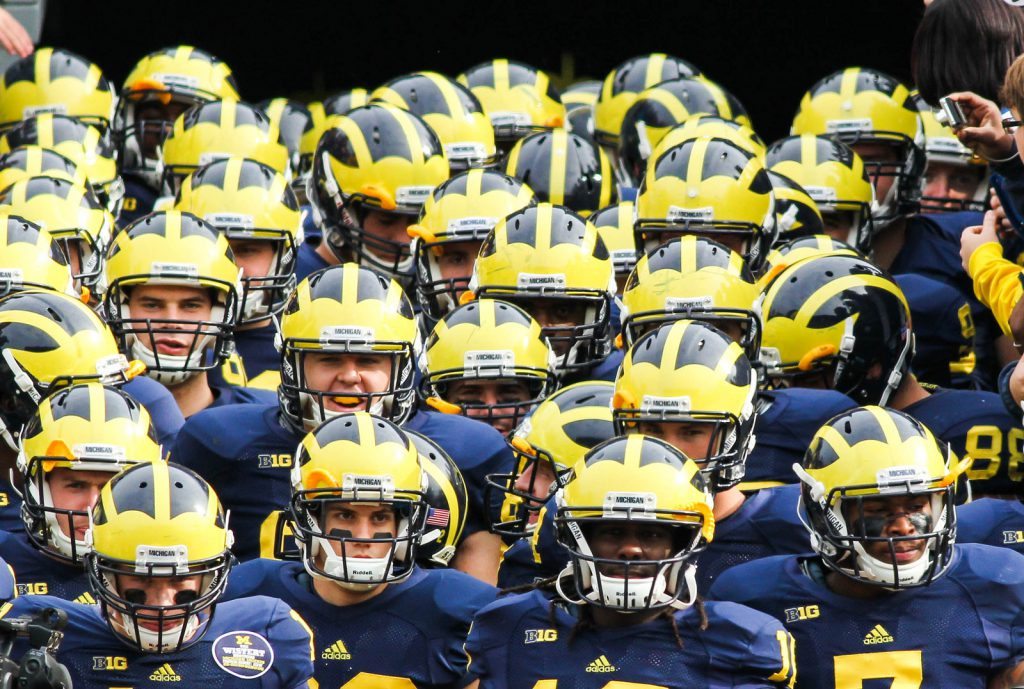 Every game the Wolverines hold a seat for Fritz Crisler who served as Michigan head coach from 1938 to 1947. The tradition has even lead to the official capacity of Michigan Stadium ending in 1 whenever the capacity changes. 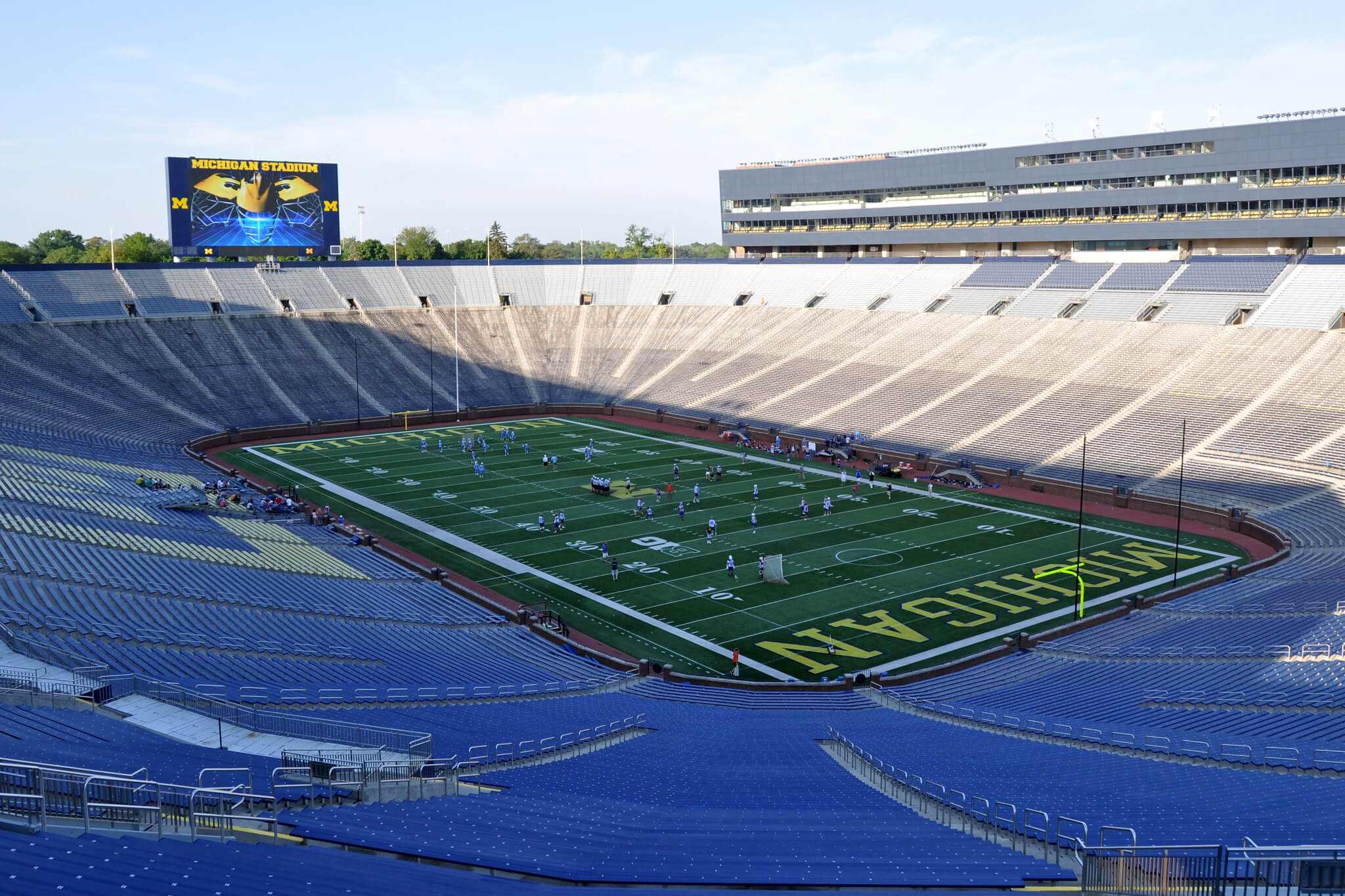 One of the great Michigan pregame traditions is the drum line’s “Step Show.” The show takes place about an hour and a half before the game on the steps of Revelli Hall and shortly after, the entire band does the musical March to the Stadium down Hoover St, turning left on Greene before entering the Big House. 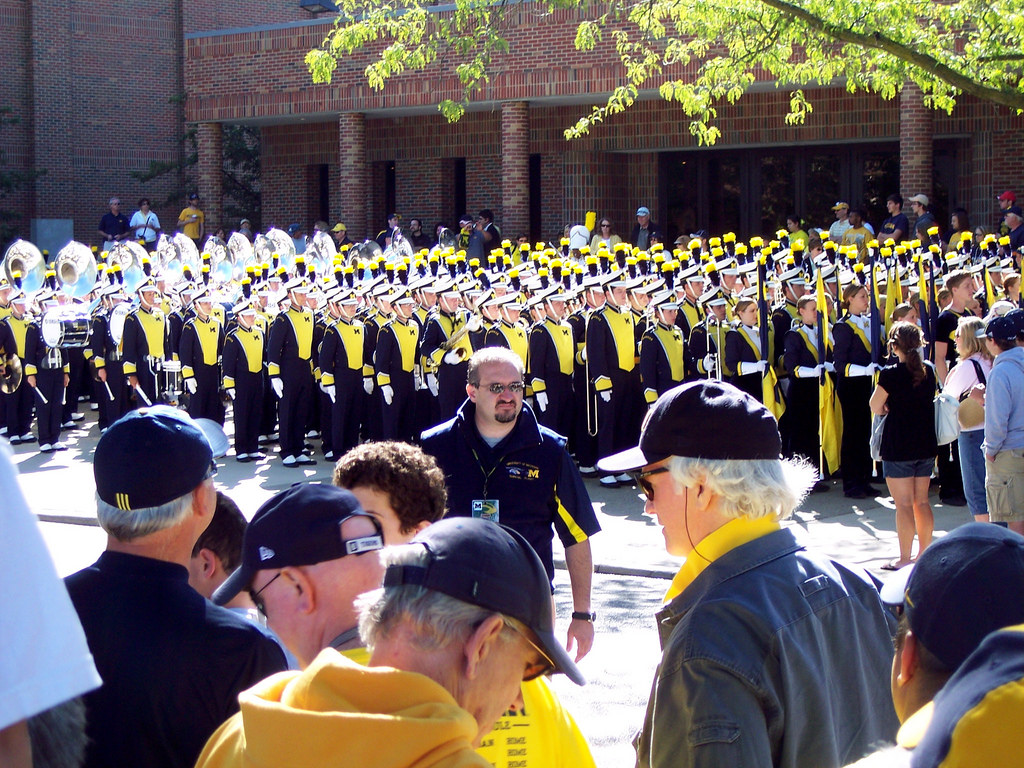