Home of the Montana Grizzlies

The tradition of passing down the number 37 football jersey has been happening since 1987.  It has been stated that the tradition started at Stockman’s Bar when running back Kraig Paulson and defensive back Tim Hauck went out for beers. What is known to be true is that Paulson gave his jersey to Hauck.  Ever since the jersey has been passed along to an in-state recruited player that the previous wearer decided should wear it next.

The tunnel run at the beginning of each home game is a show of itself.  It starts with the male cheerleaders running out waving Montana Griz flags while the female cheerleaders do front handsprings onto the field.  While the crowd is cheering, the football team runs through an inflatable football helmet through the smoke.  The players know to come onto the field when they hear the song “Bring Em Out.”  As they run onto the field, fireworks shoot into the air and the cannon is shot.

3. Brawl of the Wild

The rivalry between the University of Montana Grizzlies and the Montana State Bobcats can be traced back to November 26, 1897 in Bozeman.  The fanbases of the two schools is split by the Continental Divide, which is a natural mountainous division of the state. Montana Griz fans on the west side and the Montana State Bobcats fans on the east side of the Divide.  In 2001, the two schools formalized the rivalry and made the Great Divide Trophy one of the hardest fought rivalries in the FCS.

Since the fall 0f 1993, Monte, short for Montana, has been the University of Montana’s mascot.  He has been a fan favorite and was named National Champion Mascot of the year twice (2002-03, 2004-05).  He is a very animated mascot that can be found goal post smashing, motorcycle riding, crowd surfing, doing back flips, and pulling pranks.  He makes hundreds of appearances in the community every year.  He even made an appearance alongside Joe Montana in a Super Bowl commercial.

One tradition that has stuck over the years is the trio of Montana’s state flag being brought onto the field with the team for every game.  No matter if it is a home or an away game, fans can be sure to witness Griz upperclassmen bringing the flags into battle when they run onto the field.  Citizens of Montana are very proud of the state in which they live.  When carrying the flag, even the players from out of state feel like they are from Montana from hearing the cheering crowd. 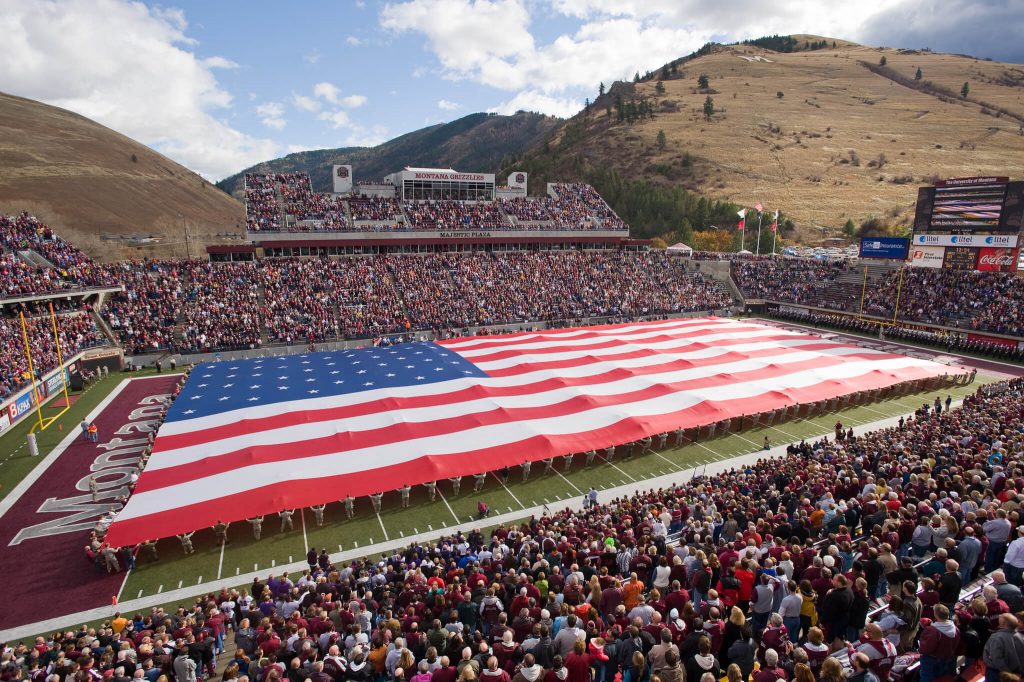 The city of Missoula is a college football town.  The community surrounds itself with banners, car stickers, posters, and people wearing team apparel.  The excitement in the stands can be felt by everyone who attends.  Each person wants to win as much as the others.  The passion and the excitement runs throughout the city. 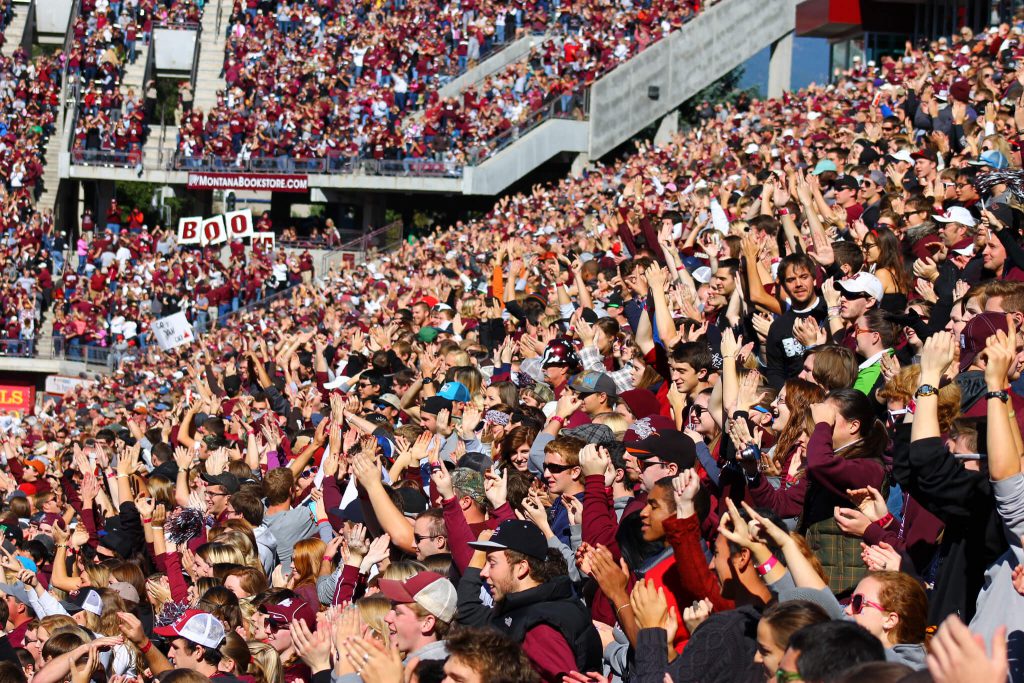 Griz fans take pride in getting pumped up on game days.  With the tailgate starting two hours before the each home game, fans can hang out, eat, and drink with friends, family, and the rest of the tight-knit community.  Live music and DJs also are found at these tailgates.  Hosted by the Grizzly Scholarship Association, the fans can get pumped at both home and most away games.

Griz fans have come accustom to having a cannon shot every time the home team gets a touchdown.  Every time it goes off, all of the fans cheer louder and louder.   When the cheerleaders run out of the tunnel at the beginning of the game, the cannon is also shot off.

The Griz have the fifth-longest home win streak in FCS history.  It started on September 3, 1994, against Sonoma State and ended on October 18, 1997, against Eastern Washington University.  The Griz won 30 games during that streak.  In this time, three of its 11 undefeated seasons occurred.