Home of the Tennessee Volunteers

Tennessee is the finest programs in the SEC having produced some of the greatest players in both college football and professional football history including Peyton Manning and Reggie White. Their reputation speaks louder than their bright orange and white colors. Having played their first season in 1891, the Vols have played football for well over a century, with their combined record of 811-367-54, ranking them tenth on the all-time list. They have won 13 conference championships and six national titles in their history, with their most recent national title being won in 1998. Volunteer Football is a big deal, and if you are going to attend a game, you have to be ready.

One of Tennessee’s most respected traditions is the “I Will Give My All for Tennessee Today” sign. As the team leaves the locker room to head into the tunnel that leads onto the field, the players tap the wooden sign that hangs above the door. Many fans have replicas that they keep, and it is a symbol of their love and loyalty to the Tennessee Volunteers. When cheering on the Volunteers give it your all to make sure Tennessee comes out with the victory.

You better bet that the fans in Neyland Stadium will be giving their all to aid the Vols on Saturdays. Neyland Stadium is one of the most intimidating places for opposing players to play as on game days this raucous stadium seats over 102,000 yelling and screaming Vols fans. All you’ll see in Neyland Stadium is a blob of orange and white as everyone comes decked out in the Vols colors to cheer on their team.

Come to Knoxville prepared to cheer hard for the Vols and sing Rocky Top with one of the loudest and most passionate fan bases in the country. 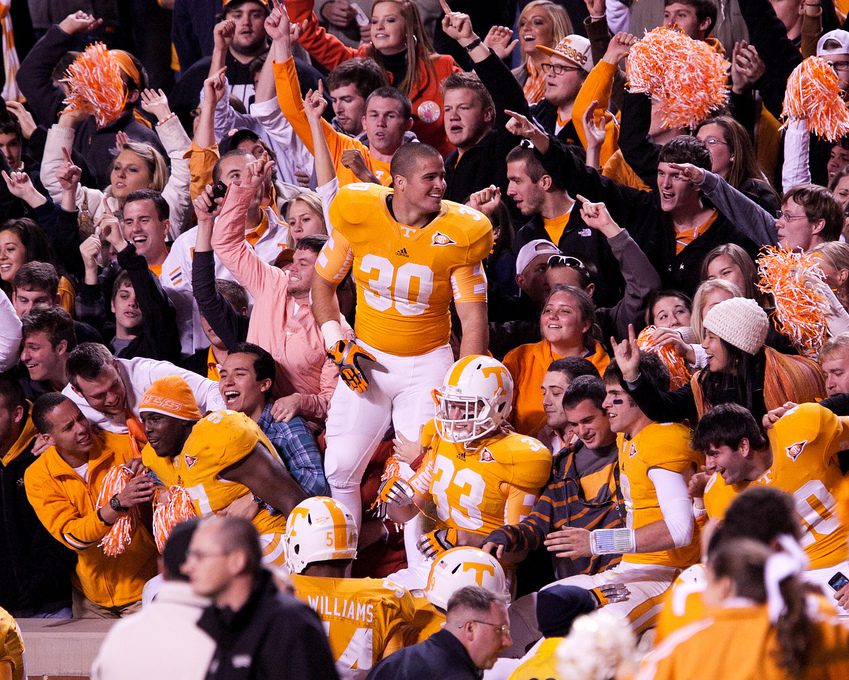 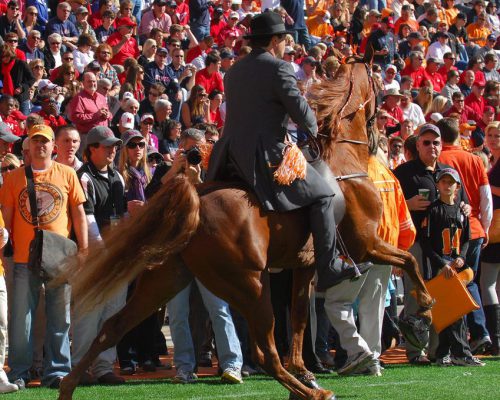 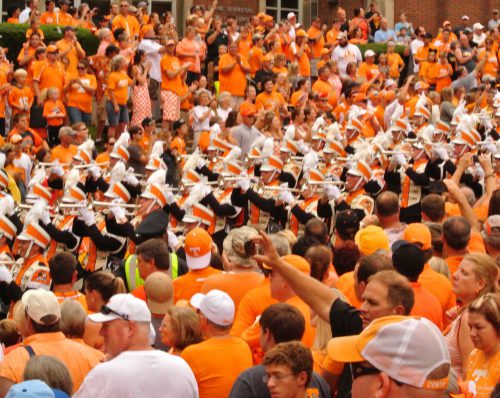 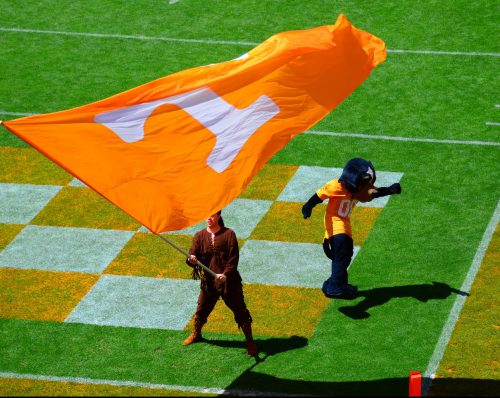 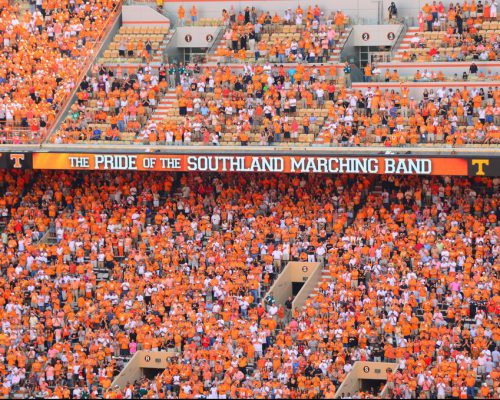 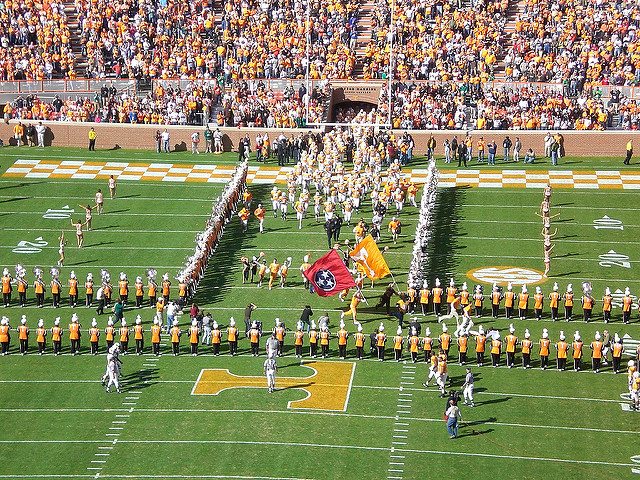 Running Through the T

Since the 1964 season, the Volunteers have entered the field by “Running through the T”. It starts with the band slowly getting into a T-Formation as the crowd gets more excited minute by minute. Right as it seems the stadium is about to crater into two parts, the Cheerleaders and Mascot start running onto the field and the team starts running through the T Formation. It’s a MUST SEE for a Teneesee football game! 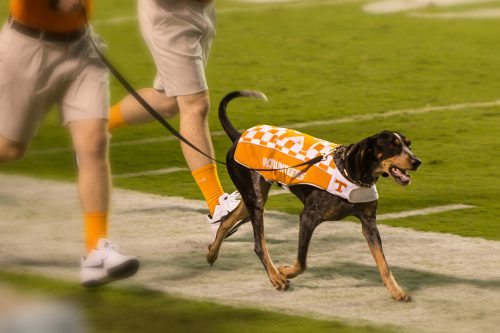 Smokey, the Dog, leads the team out of the tunnel at the beginning of each game and howls to get the crowd pumped up at halftime. Smokey is a staple at every Tennessee game, so look for him to energize the team and crowd. 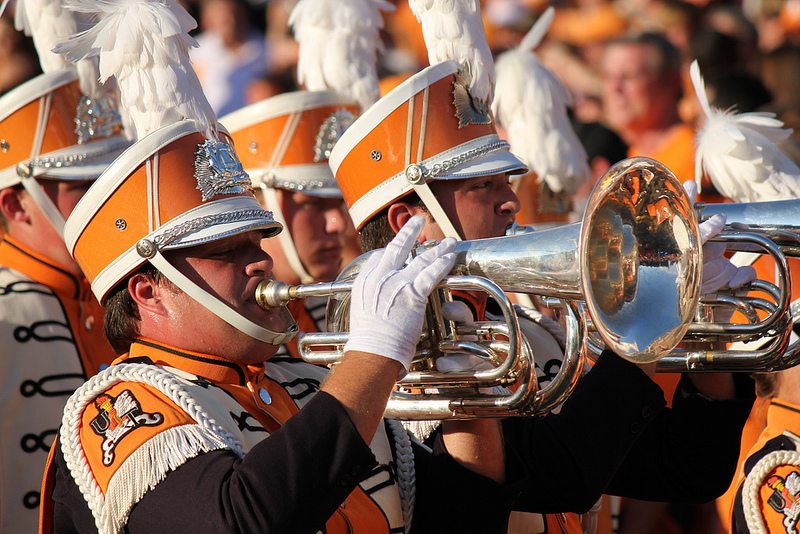 Pride of the Southland Marching Band

The Pride of the Southland Marching Band has been performing at halftime of Vols games for over 110 years. The band plays a variety of songs including fan favorite “Rocky Top” as well as Tennessee’s fight song “Down the Field.” The band shows at Vols games are a great tradition that make game days something specia 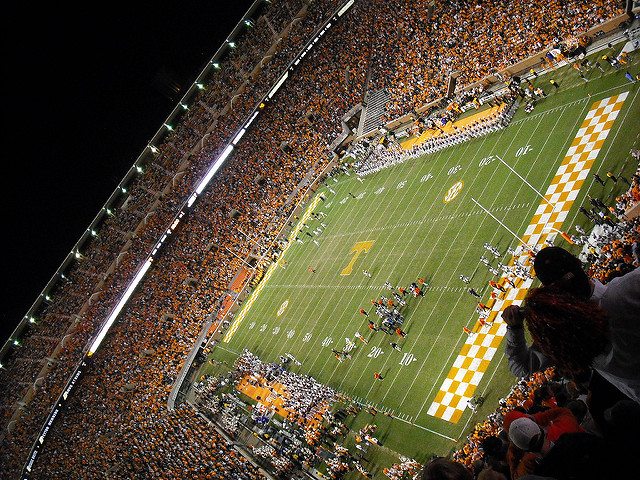 Coach Dickey made a lasting addition to Tennessee's beloved game-day traditions when he had the end zones painted with an orange-and-white checkerboard design in 1964. The checkerboard end zone remains to this day and is a unique display of Tennessee’s football history and pride. 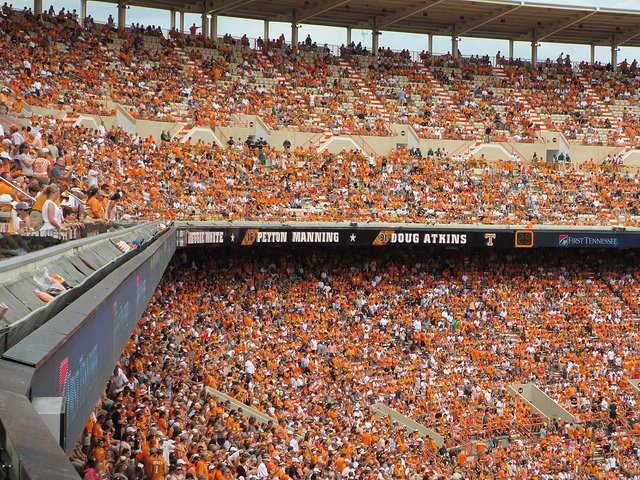 While not the official fight song of Tennessee “Rocky Top” is perhaps the most beloved song by Tennessee fans. The Pride of the Southland Band began playing it in the 1970s, and today it is one of the most widely recognized in college sports. Come to Knoxville prepared to belt out this tune as it is a time-honored tradition.