Home of the Vanderbilt Commodores

This naval horn signifies game time and is played after every Commodore score. You can hear the Admiral all throughout campus on game days allowing even those not attending the game to know when the Commodores score. 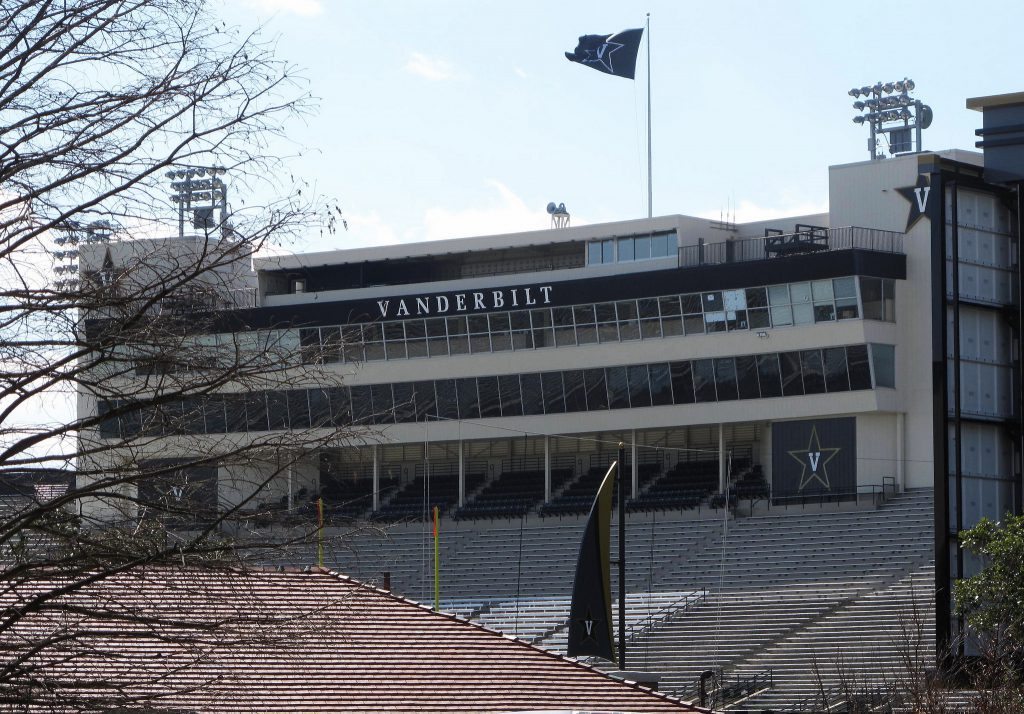 Blackouts are a staple for big Vanderbilt home games. Playing in the SEC every conference game his huge. The fans here come out painted and wearing all sorts of black to get rowdy and cheer on their team. Put on your black and come prepared to cheer on the Commodores.

Following every football team victory, a solid black flag with the Vanderbilt Athletic mark is hoisted above the west side of Vanderbilt Stadium, where it remains for seven days. Students and fans alike love raising the flag and being able to look at the Victory Flag after every conquest.

The band is a staple of a Commodores Gameday as they not only make up the core of the student section but also put on an outstanding halftime performance. They also play the school’s fight song “Dynamite” after every Vandy score, which sets off the crowd.

Vandyville is the heart of the Vanderbilt tailgate scene as you’ll find a variety of events and activities that will make your gameday experience at Vanderbilt a special one. You’ll be able to enjoy the action from all around the SEC as VandyVision will keep you up to date on what’s going on around college football. Vandyville opens three hours before kickoff, so get here early to make the most of your day.

Before each home game, a group or individual is selected to “drop the anchor” at midfield to mark the beginning of the evening’s events. This tradition is an excellent way to get the fans involved in the game day festivities and also really pumps up the crowd.

Vanderbilt and Tennessee are founding members of the SEC, so when these pioneers play, everyone comes to watch. This in-state rivalry has been played for over a century as these bitter rivals have battled 109 times since 1892. Tennessee has taken 74 of those contests, but the Commodores have won two of the last three meetings.

The new and improved stadium decreased its seating capacity, but this has created an intimate feel for the audience and makes the opposing team feel surrounded by Commodores! You’ll love the intimate atmosphere at Vanderbilt Stadium that makes you feel like you’re part of the action.

The Rebels are Vanderbilt’s second-oldest rival as well as their annual crossover opponent. These two schools are the two smallest in the SEC, and both have a high percentage of students involved in Greek life. Ole Miss holds the all-time series lead 50-38-2. However, the Commodores record of 18 straight wins in the series from 1894 to 1938 remains the longest winning streak in the series.