Home of the Yale Bulldogs

The rivalry between Harvard and Yale is the third most played rivalry in Division I college football and is one of the best rivalries in college sports. Sports Illustrated named the rivalry the sixth-best in college sports and no matter what the sport or contest there are always bragging rights on the line between the two Ivy League schools. Harvard and Yale flat out hate each other, and it’s no different on the gridiron. The Bulldogs hold a 66-59-8 lead in the rivalry and you won’t want to miss it when they take on Harvard.

You won’t want to miss the Bulldog Walk, which takes place 80 minutes before kickoff.  The Bulldog Walk gives you the opportunity to see the players and coaches before the game as they walk from Walter Camp Memorial to the Yale Bowl, making it a can’t miss part of the pregame festivities.

Handsome Dan has been Yale’s mascot since 1889 and is a can’t miss part of any Bulldogs game. You’ll spot Handsome Dan at every Yale game and he does a great job of inspiring the team and fans, so keep an eye out for him throughout the game.

Stop by Jensen Plaza and see the names of every football player in Yale history. Each Yale team has a brick, so take some time to remember your favorite past Bulldogs teams and players.

Snap a picture with the Handsome Dan statue located outside Jensen Plaza. The statue is a must-see for any Bulldogs fan and presents an excellent photo op as well. 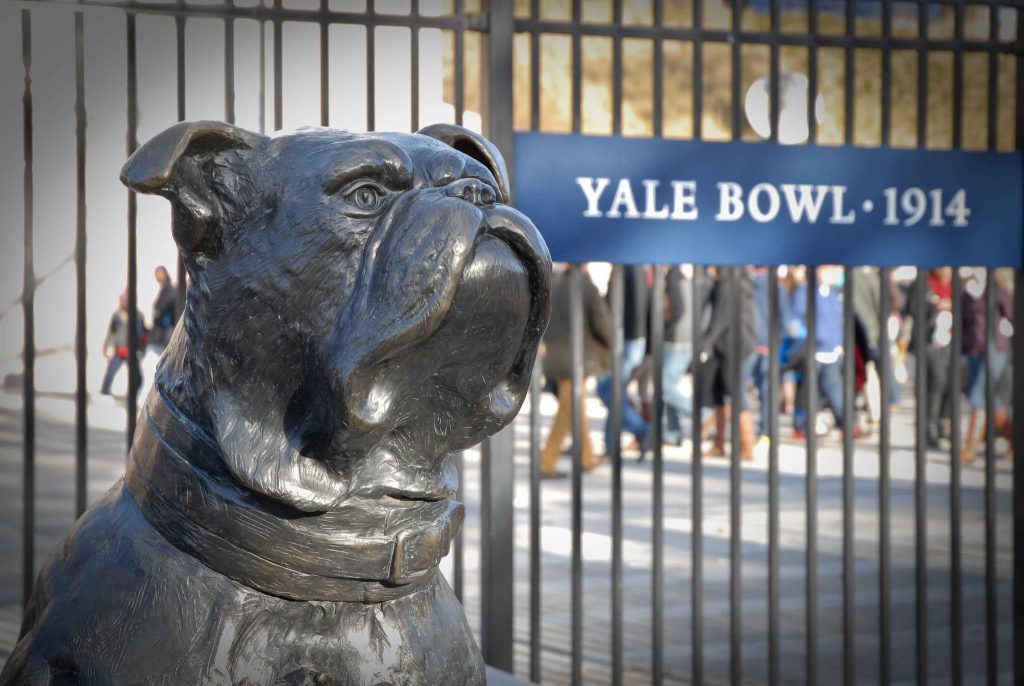 The rivalry between Princeton and Yale is the oldest rivalry in American football dating back to 1873. The Ivy League teams have met 139 times over the years, and the Bulldogs lead the all-time series 76-53-10. You won’t want to miss it when Princeton and Yale clash, so make sure to get your tickets when the Tigers come to town.

The cheerleaders do their best to keep everyone engaged with the action on the field. They get everyone pumped up even when the Bulldogs are struggling and are a big part of the pageantry found inside the Yale Bowl on game days.