The Top 10 Craziest Fans in the NFL

The fan base of the Cleveland Browns is one of the loudest and most passionate in the league. The most passionate of Browns fans can be found in the Dawg Pound. These extremely zealous fans sit behind the east end zone in FirstEnergy Stadium and remain loud and rowdy throughout the game no matter what the score. You’ll see these super fans wearing their Dog masks, carrying dog bones and occasionally even eating dog food. These Fans make the atmosphere inside FirstEnergy Stadium arguably the best in the NFL. 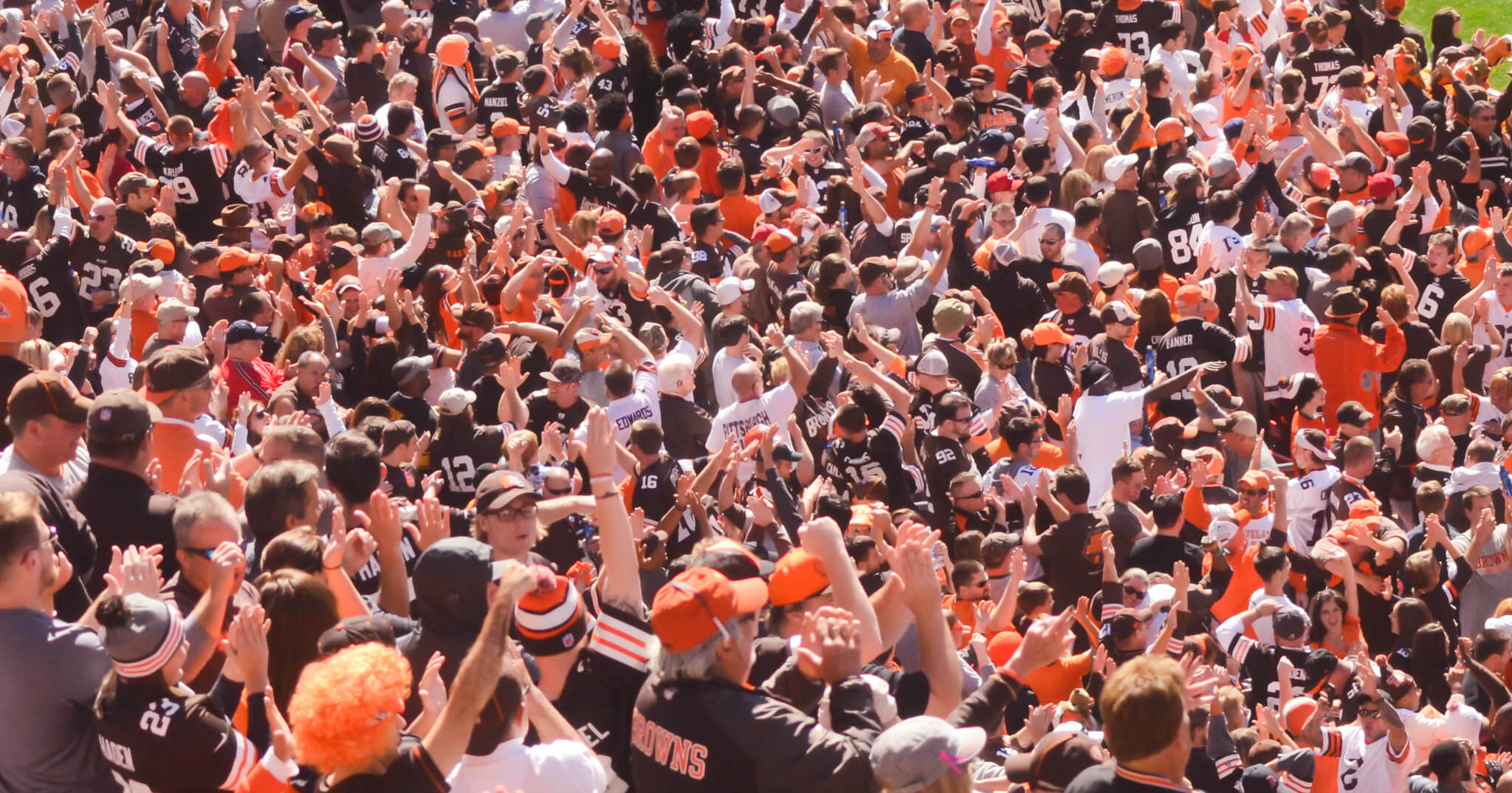 Jets fans are loud and proud of their team as not only are they some of the loudest and most passionate fans in the NFL, but they also come to games dressed head to toe in green and white. Jets fans tend to show a lot more heart and grit compared to the other New York-based NFL fan base, which goes a long way in helping create a great fan atmosphere at MetLife Stadium. Despite being put through the wringer over the years, Jets fans still come out strong to support their team. 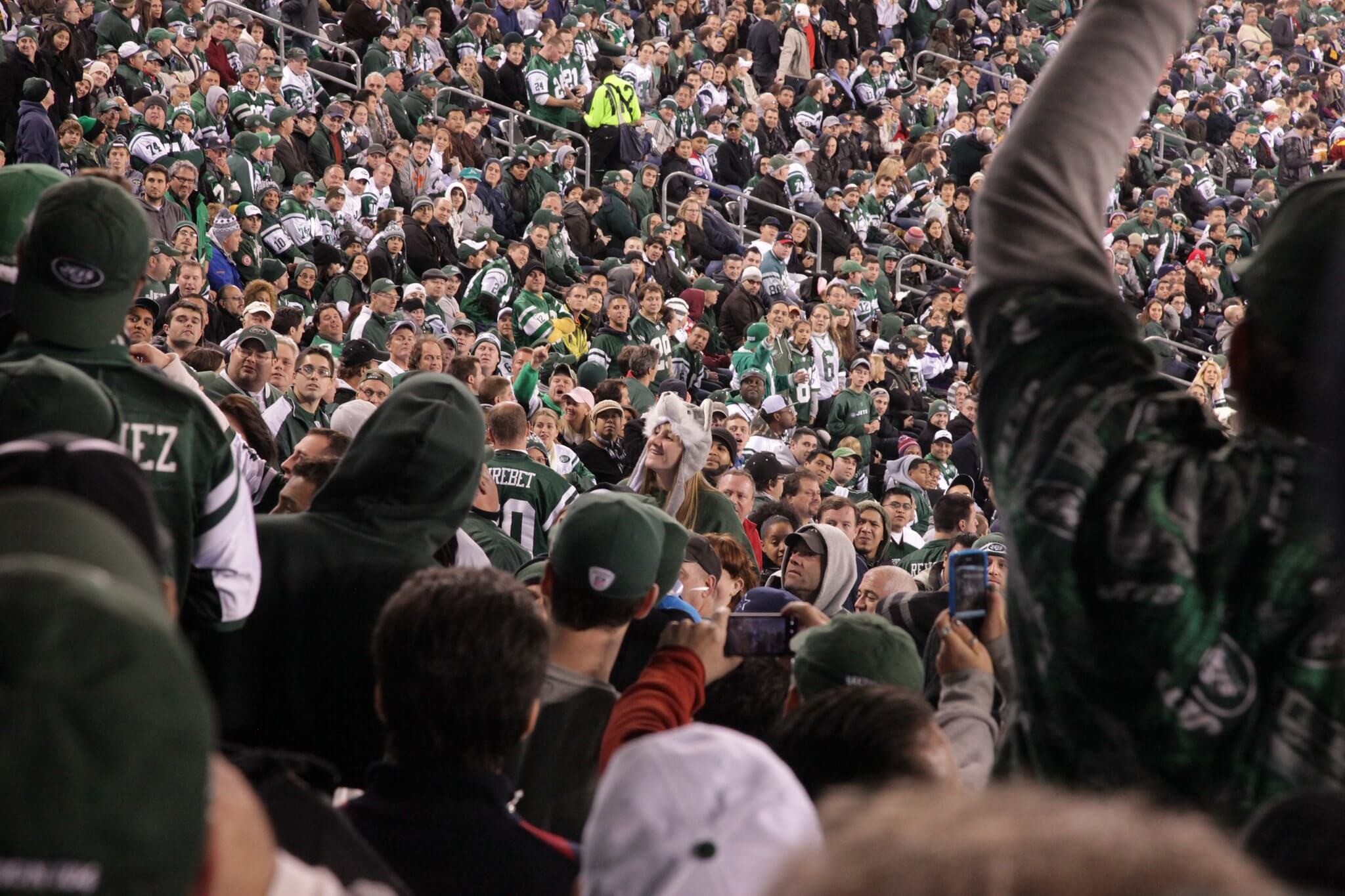 It’s not just the architecture at a Pats game that makes the trip to Foxborough a special experience. Pats fans are among the most diehard and loyal fans in the NFL. Sure it may seem easy for Pats fans to be loyal at the moment with the team having made the playoffs in 12 of the last 13 seasons, but Pats fans have been selling out since 1994 when the team was coming off a 5-11 season.Come on out to Foxborough to experience some great NFL football by watching one of the best teams in the NFL play in one of the best stadiums in the league as well. 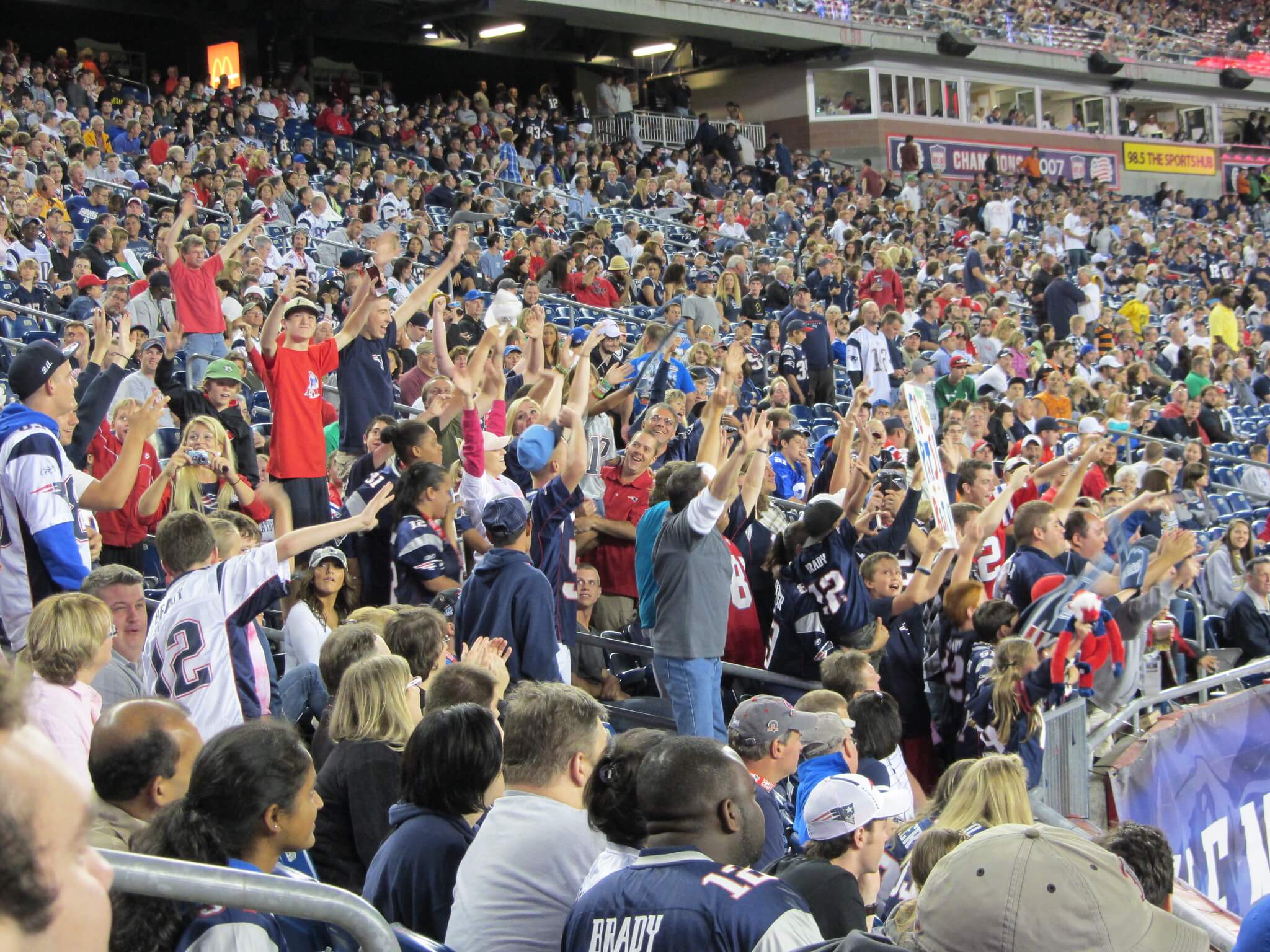 The fans inside Soldier Field are truly one of the craziest in NFL. The atmosphere inside of Soldier Field is among the best as everyone in Chicago rallies behind the Da Bears on game days. Typically Bears fans are most vocal when their team is on defense. Not only because the fans want to disrupt the opponent’s play calling, but also because, over the course of their history, the Bears have managed to have one of the best defenses in the league consistently. If you love bone-jarring hits and turnovers, then you’ll love taking in a Bears game where nasty defense is expected by everyone in the crowd and on the field. 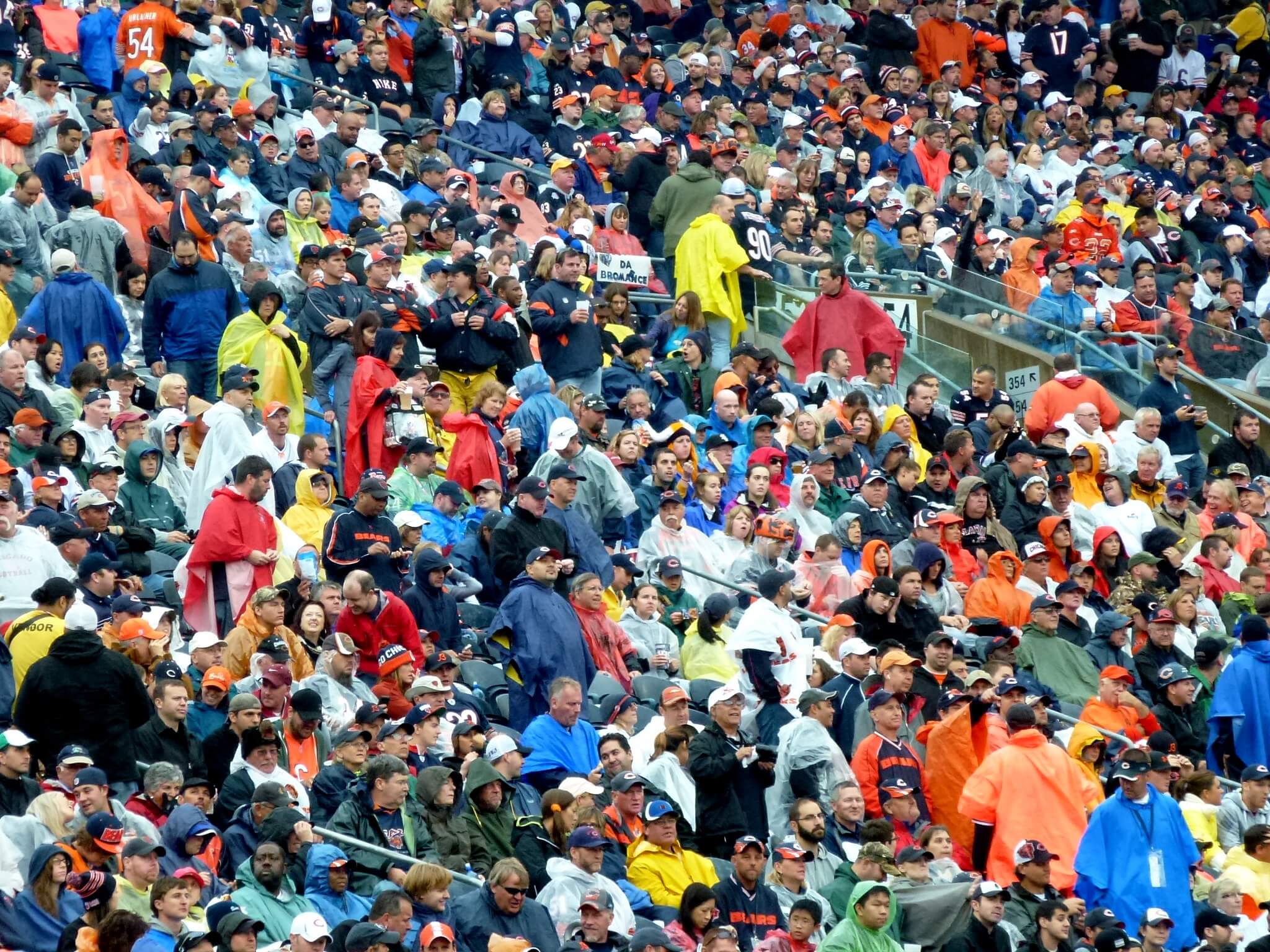 Giant fans show off their team pride by decking themselves out in Giants gear, so if you want to fit in at a Giants game make sure to wear blue and white. If you’re attending a Giants game at MetLife as a visiting fan be prepared to receive some heckling from Giant fans. Fans of rival NFC East teams, in particular, should expect some razzing as these games are some of the fiercest in the NFL. No matter what team you’re a fan of you’ll surely have a great time attending a New York Giants game. 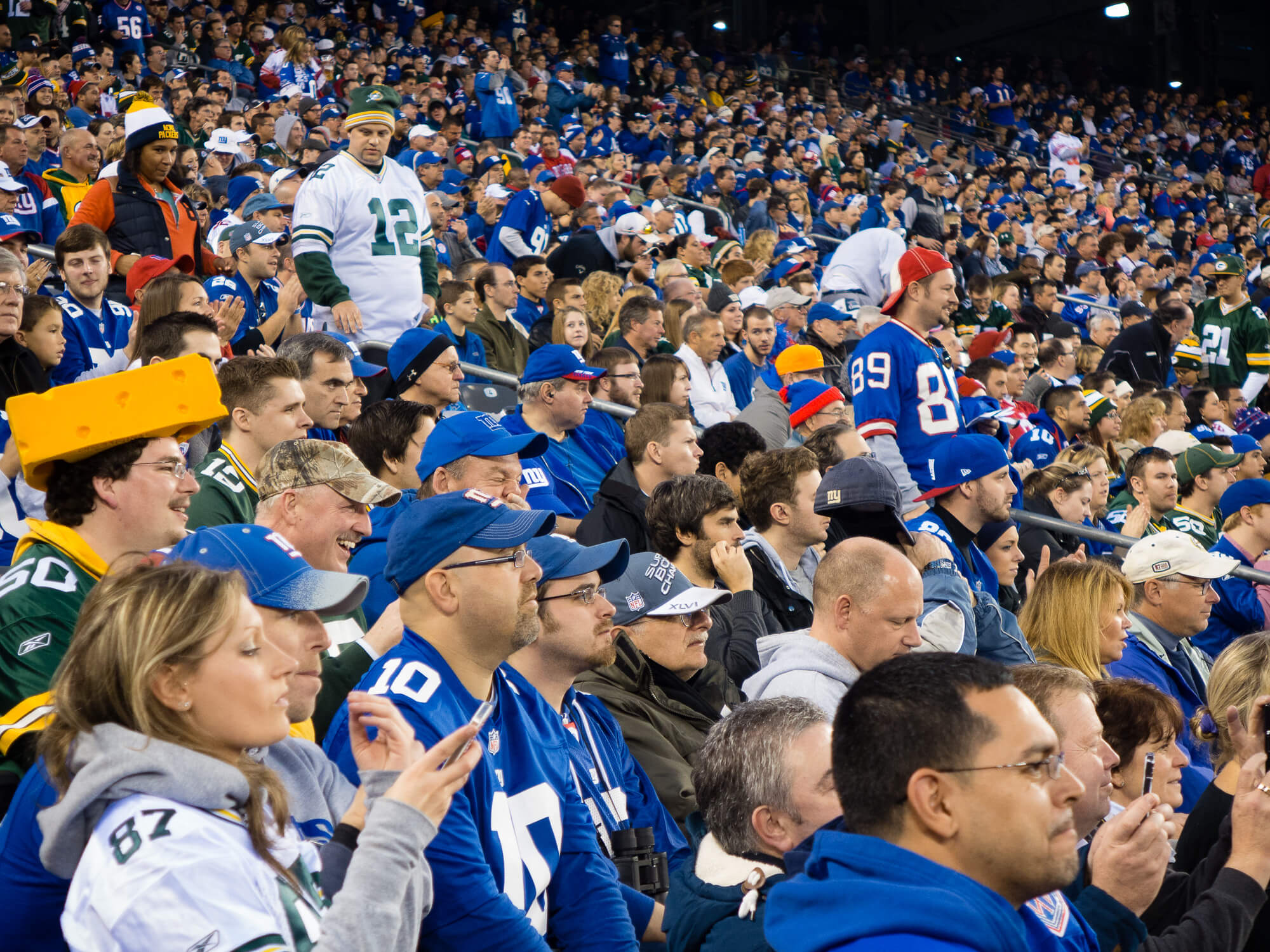 The fans are a big part of game day at Lambeau Field and any fan looking to get into the Packers game-day spirit really will don a foam hat shaped like cheese. The support of the dedicated Green Bay faithful is hands down the best in the NFL and is a large part of why the team has brought home the Lombardi Trophy four times. The Packers are the only community-owned franchise in the NFL, which only adds to the passion the people of Green Bay have for their team. The fans have sold out every game since 1960 with the entire town shutting down when the Packers are playing. Over the years the Packers have managed to build one of the nation’s largest fan bases with people coming from all over the world to see the Packers play at Lambeau Field. 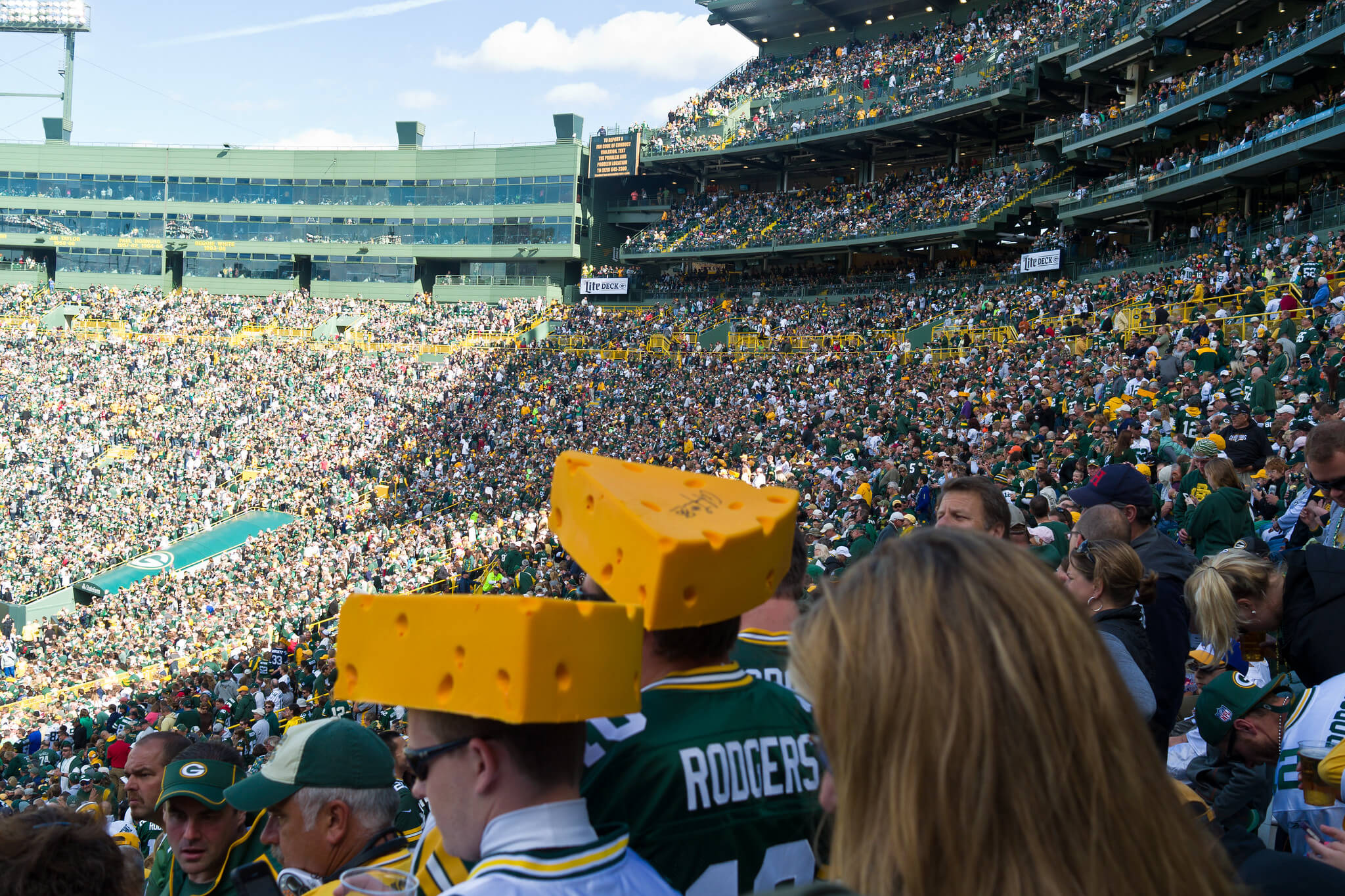 The atmosphere of the crowd though is what sets the Linc apart from other venues. Week in and week out the atmosphere is palpable with Eagles fans cheering loudly and frequently for their team win or lose. Eagles fans also won’t hesitate to let opponents or their team have it meaning you’ll hear lots of raw emotion throughout the crowd, which you may not experience in other NFL stadiums where fans are a bit more reserved. Philly fans may have a reputation for being a bit rough. However, if you come and cheer for the Eagles, you should have no problem fitting in with the crowd and may even make a few friends. You may, however, want to leave the Cowboys or Giants gear at home unless you want to get mercilessly heckled. 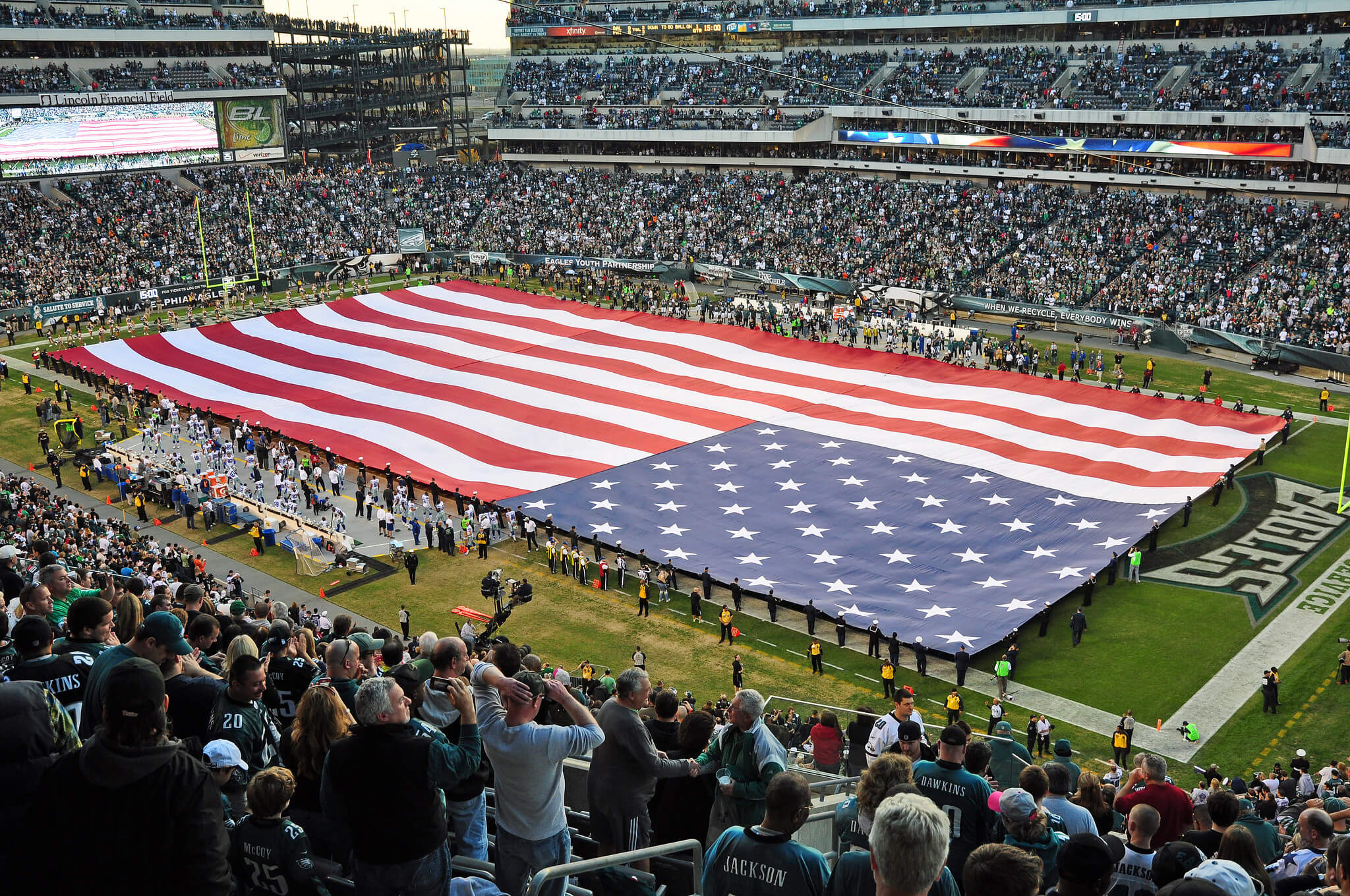 Football fanatics will attend the game in a crowd of purple haze. The sea of purple and black show just how much the fans love their Ravens and you’ll want to join in on the fun that is supporting the Ravens. Many will don war paint and dress in prized gear that can be found at the venue’s shops. It’s suggested you get to the game early because there is so much to do and see if you want to truly immerse yourself in the experience. Baltimore is a Ravens town, and everyone there knows it so come prepared to cheer on the Ravens when attending a game in Baltimore. 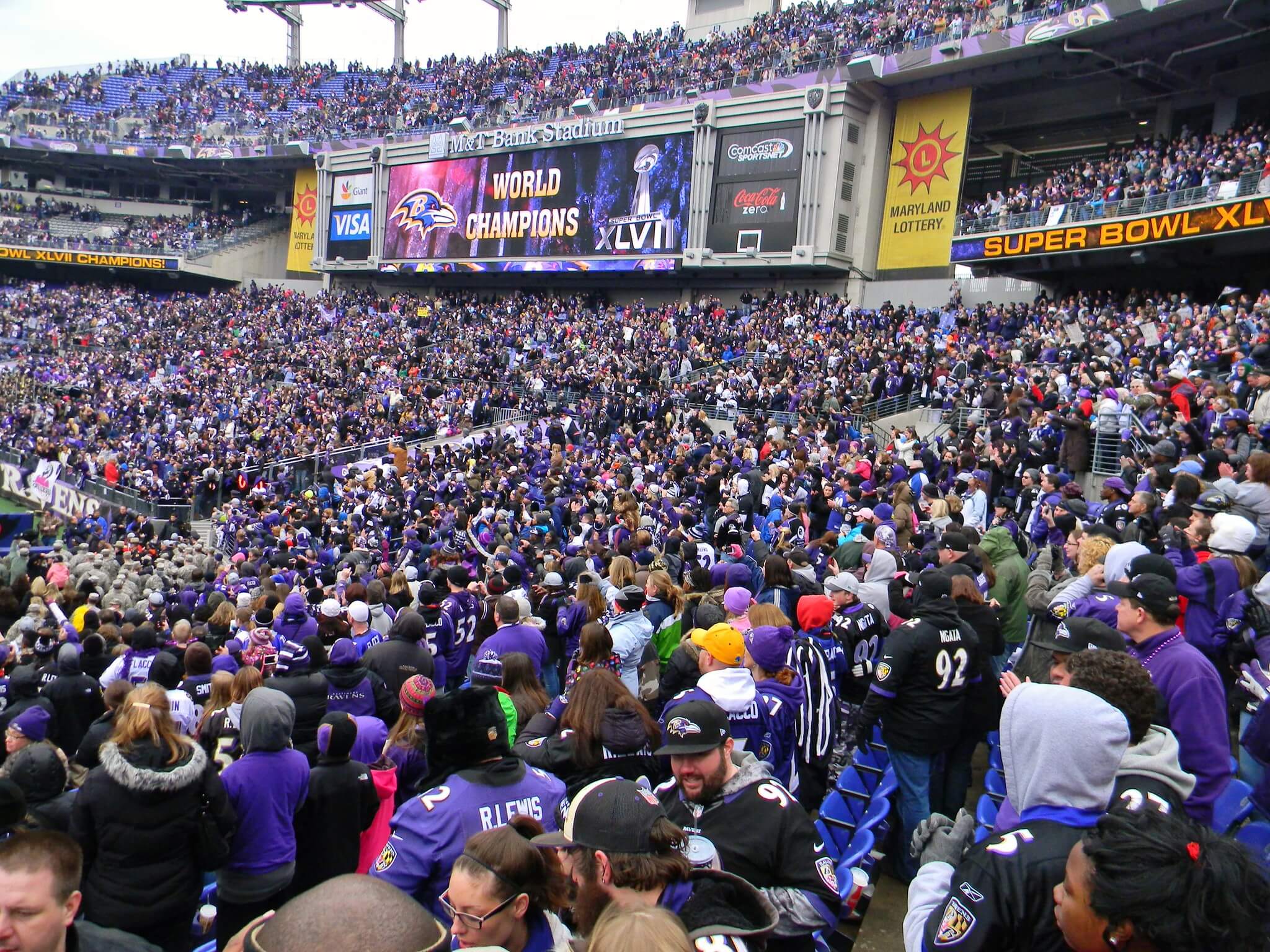 The Steelers have some of the best fan support in the nation, which can easily be seen when looking at the fact the Steelers have sold out every game since 1972. The sold-out Pittsburgh crowds bring the noise and help give the Steelers one of the best home-field advantages in football. The loud Steeler masses cheer throughout the game win or lose as the fans him brim with passion and pride for their Steelers. Grab yourself a Terrible Towel and swing it around, while taking part in the team’s famed “Here We Go Steelers” chant. 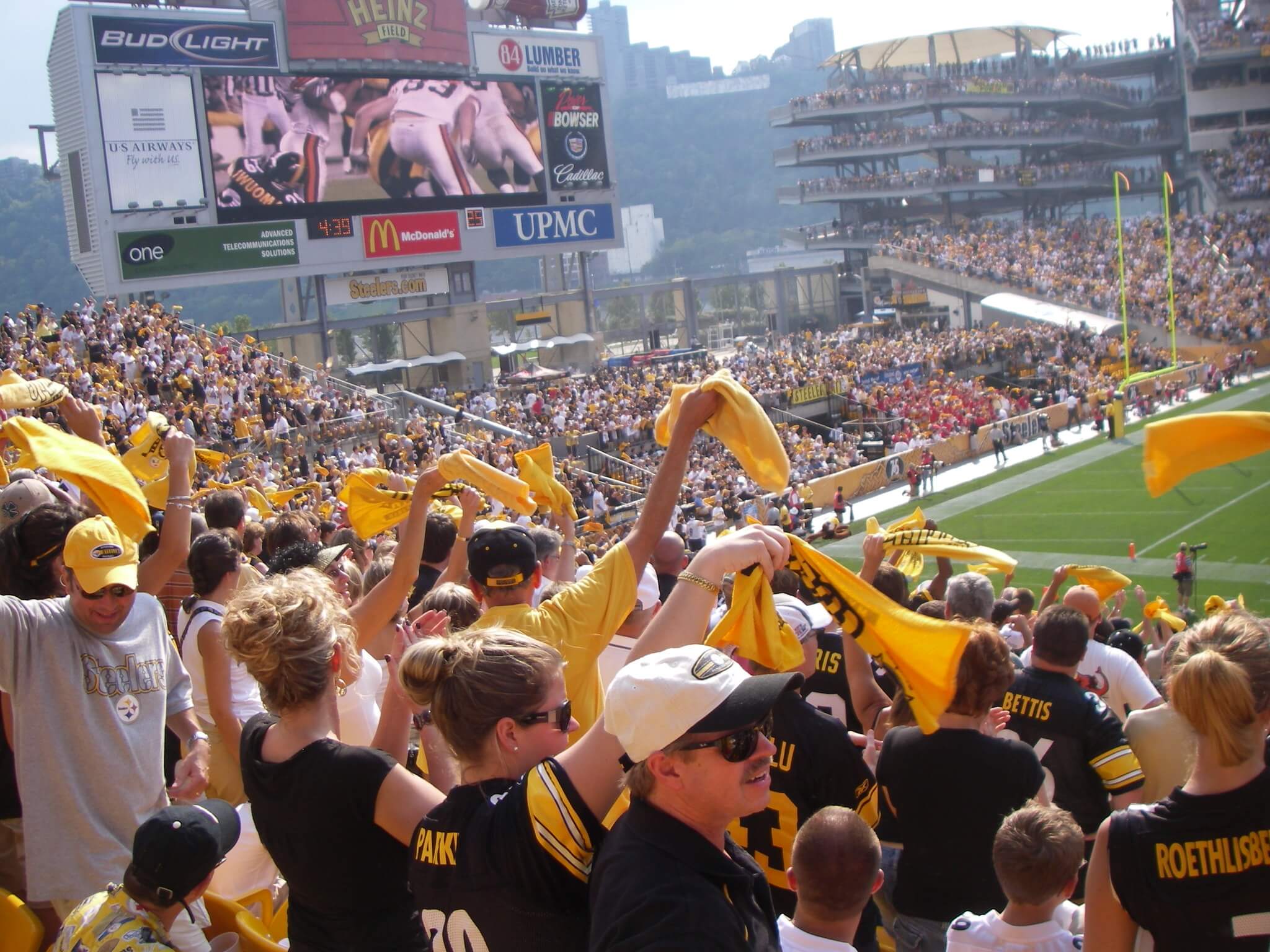 Oakland-Alameda Coliseum looks like a prison on the outside, which is fitting since inside you’ll find the wildest and rowdiest fans in the NFL. Raiders fans are known as “Raider Nation” and come to games decked out in not only silver and black but also intimidating costumes that are designed to strike fear into the opposition. The passion and pageantry on display at the Oakland Coliseum is unparalleled in the NFL and makes a visit a must for any die-hard NFL fans. 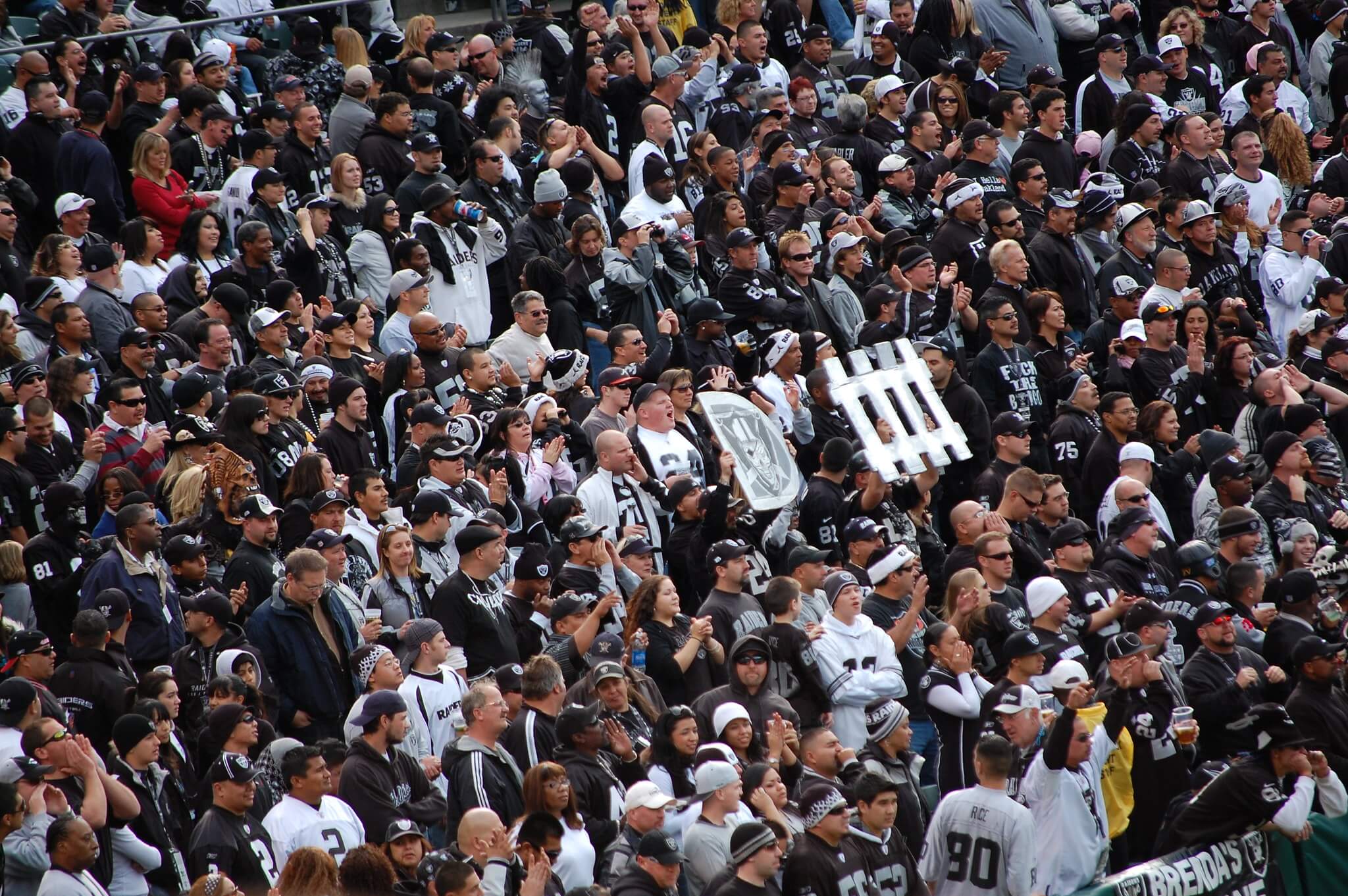