Besides it being a College drinking game staple, it has also become one of the most popular tailgating games to date. It’s almost impossible for you to go to a tailgate without seeing a bunch of people playing this classic. Beer Pong is an easy game to set up, all you need is a rectangular table, 2-3 ping pong balls, 12-14 solo cups, a ton of beer, and some great company! Beer Pong entails you trying to shoot the balls in the beer-filled cups and if it does go in, your opponents would be drinking from the cup where the ball was in. The team with the remaining cups win! 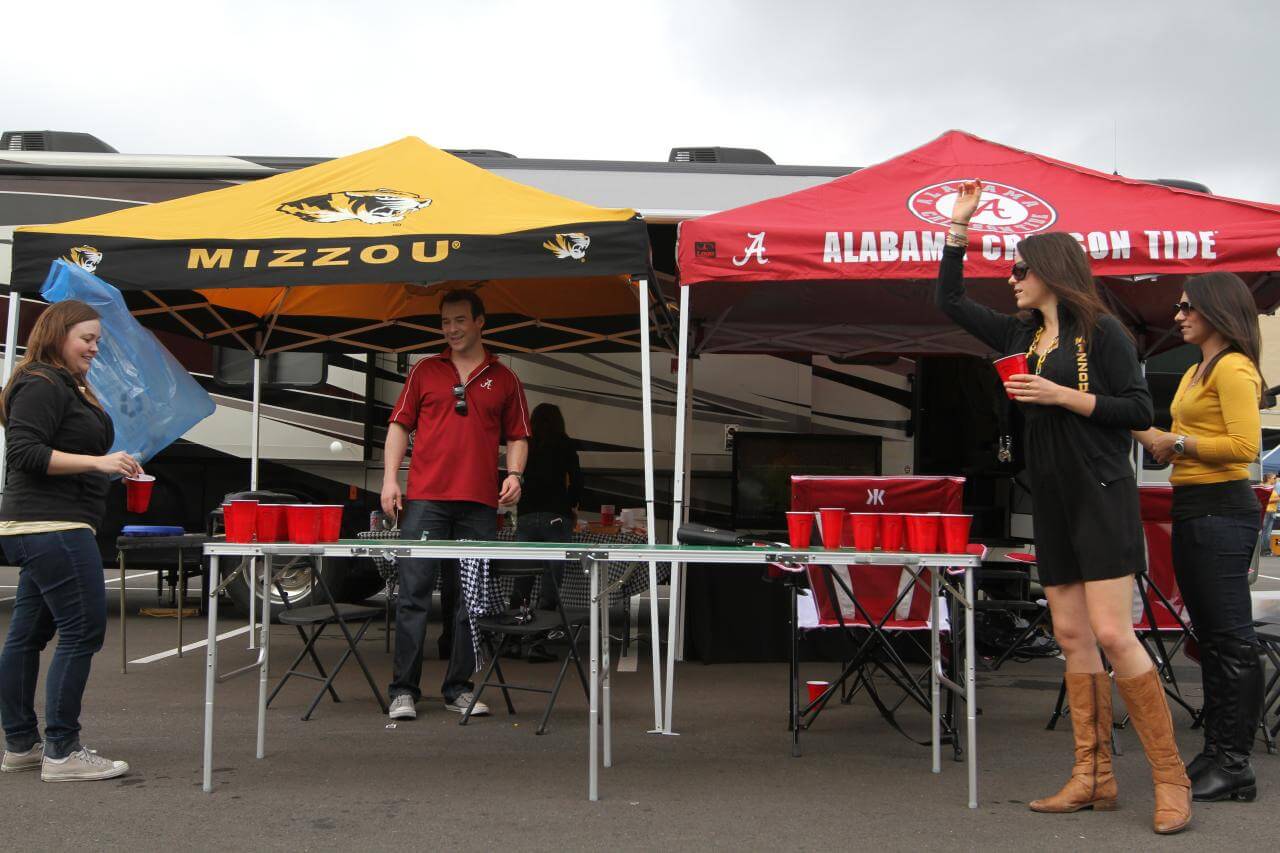 Another tailgating game classic — the Cornhole! A lot would consider the cornhole as the granddaddy of all tailgating games as this is arguably the most popular one. The game would involve 2 cornhole boards and 8 bean bag pillows (4 per team). Basically, your team would want to shoot the bags inside the whole or at least land them on the board to score 21 points as soon as possible. It’s a fairly chill game where you can even drink as you play. 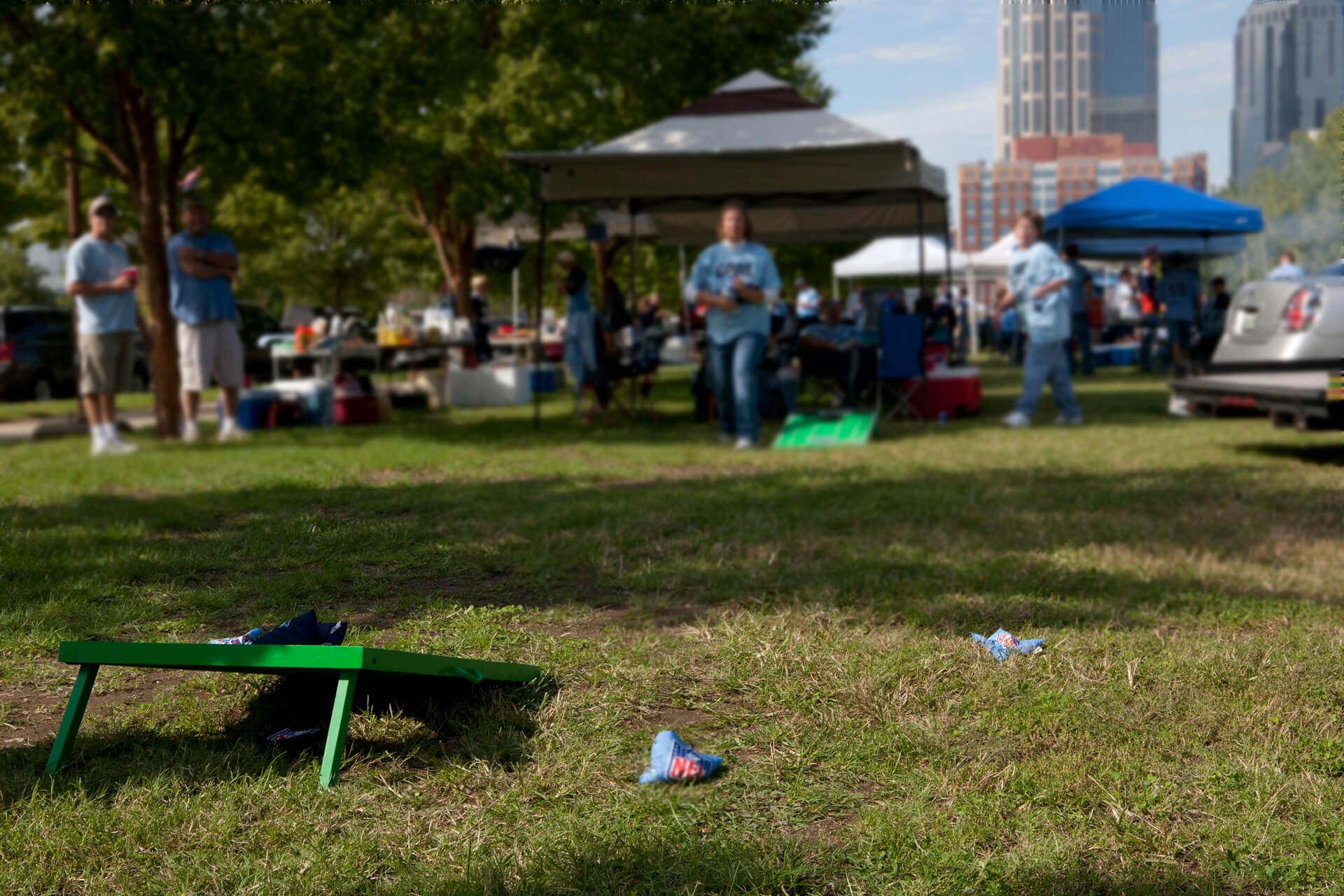 The carnival classic game makes its way to tailgating! What’s great about this game is that you can easily modify or tweak the mechanics that are best suited for your group of buddies. If you don’t have a set yet, it’s easy to make one! All you need are 12-14 bottles a bunch of rings to toss. The game is chill, fun, and sure to keep your friends entertained as you party the day away.

Tailgate scenery ain’t complete without seeing some frisbee discs flying over your head. The ultimate sport of Frisbee has undoubtedly become one of the fan favorites for games to play during a tailgate. Whether you’re playing the real thing or just the simple throw-and-catch game, it is sure to pump your adrenaline and keep you happy! 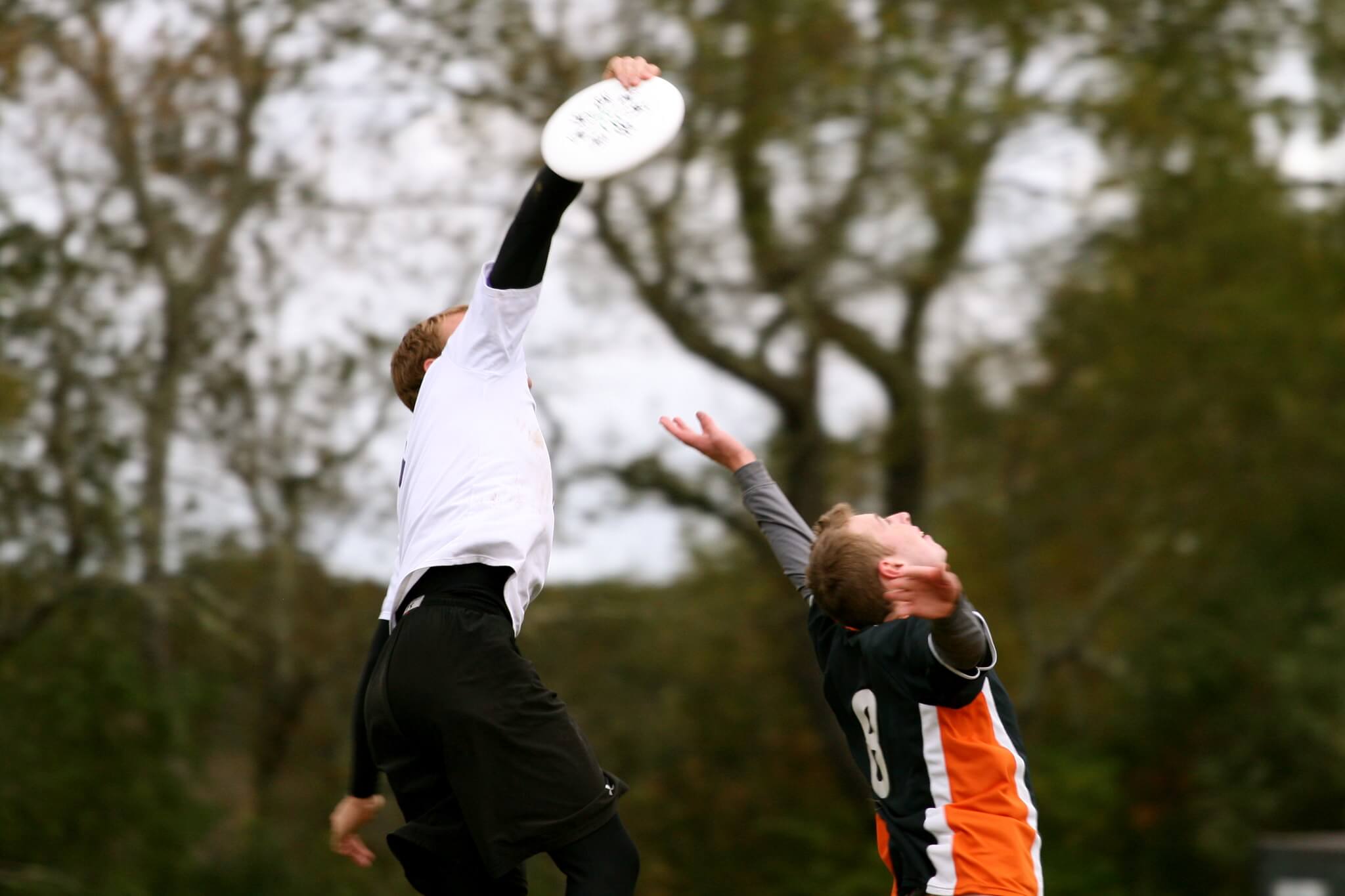 Jenga is a classic family game that was transformed into something a little more for adults. How? Through alcohol and dares, of course! Most tailgate Jenga games would have something written on the blocks that when you pull out these blocks, you would have to do what’s written on it. Other versions would have giant Jenga blocks to make the fun even better. All you need is patience and strategy to make sure that you don’t topple that tower over! 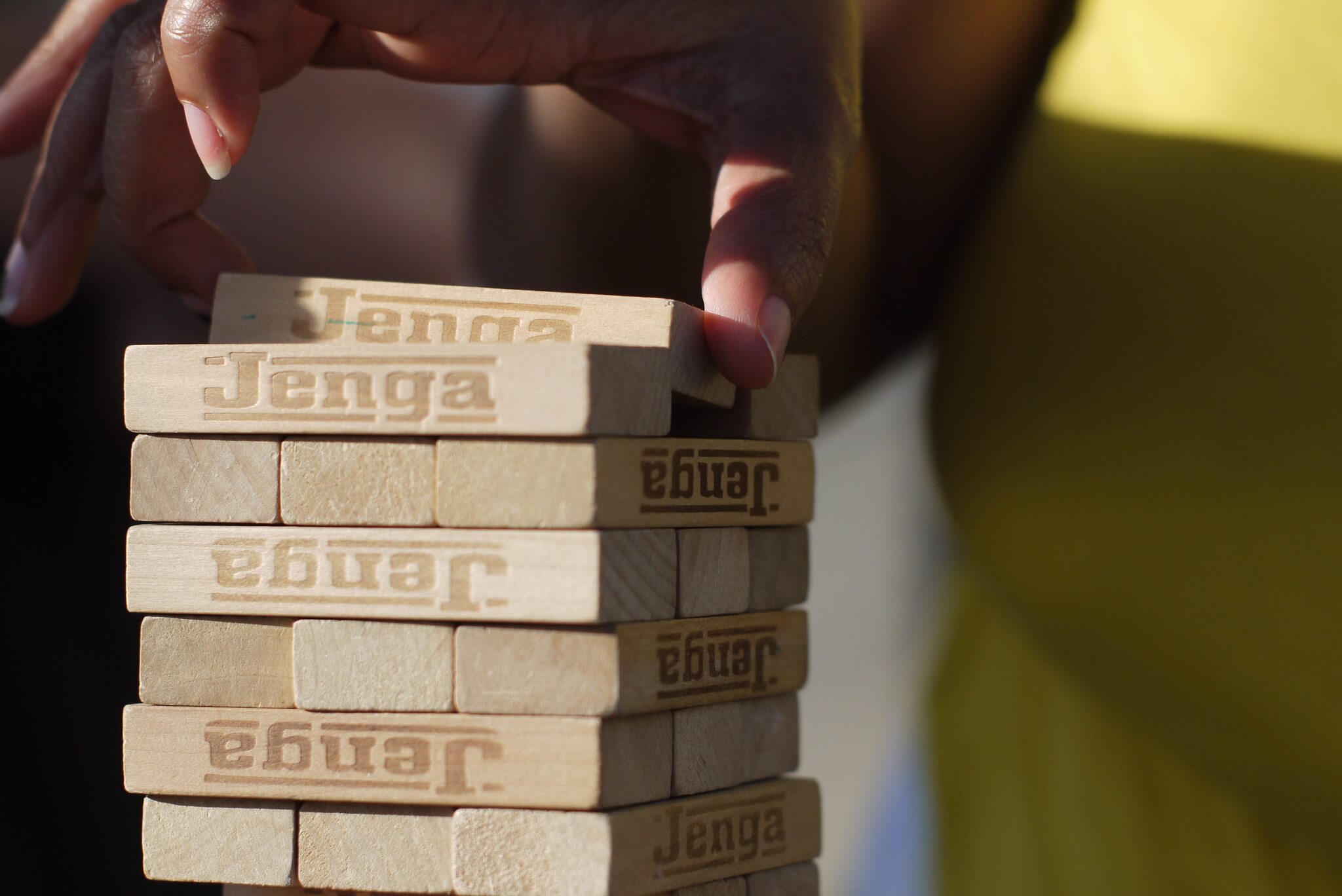 Another popular drinking game that’s made its way to the tailgating way of life. Flip Cup is a relatively easy game to understand but not necessarily easy to win as you have to drain a plastic cup of beer (or any drink of choice) and then “flip” the cup so that it lands face-down on the table. Failure to flip the cup properly would mean that the player has to try again. Quite a number of  variations of flip cup has already been made, it’s just only up to you and your friends to decide which one is to your liking. 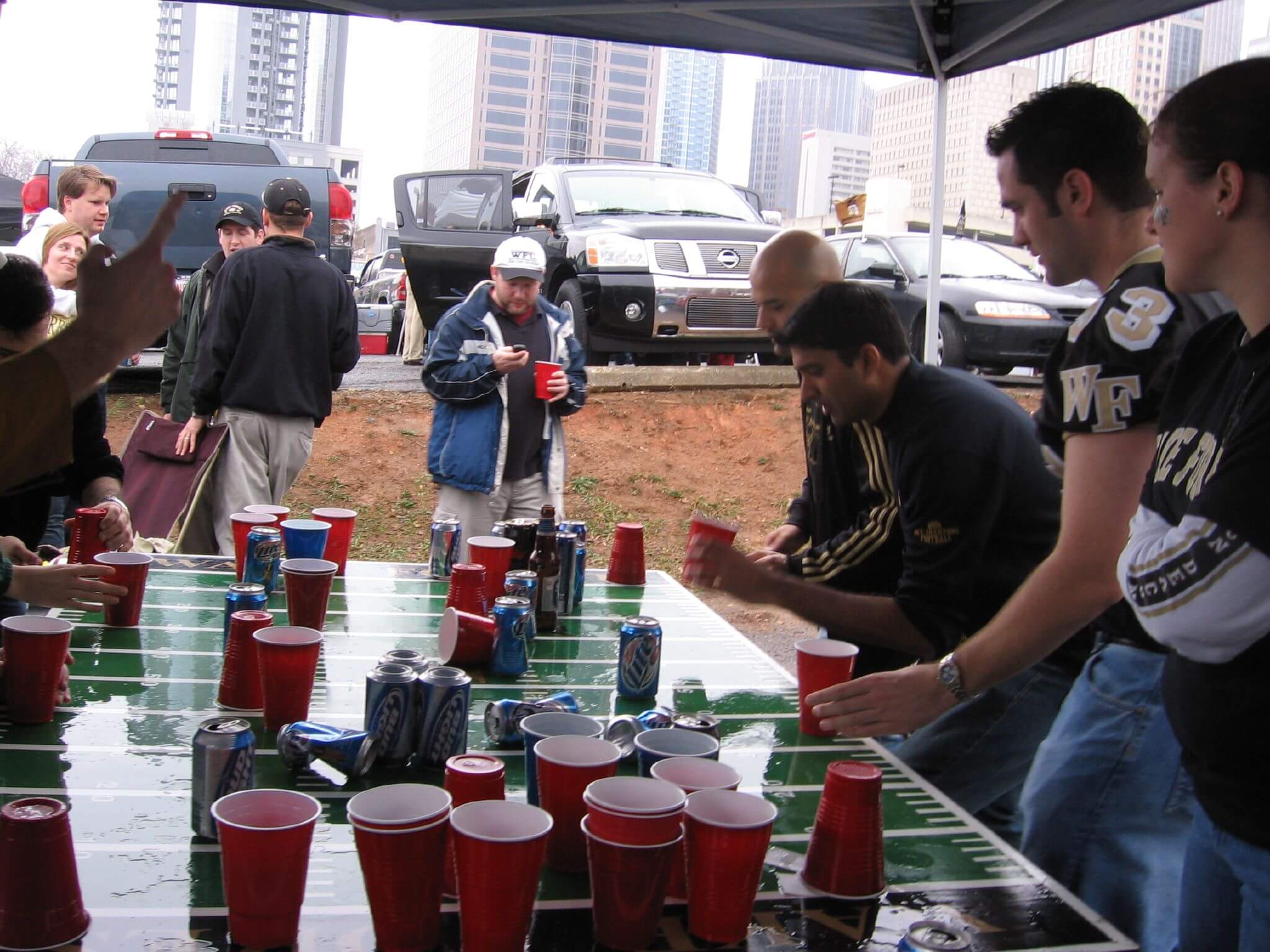 Ladder Ball is had quite a few other names to it, but one thing remains, is that it is a popular tailgating game. The game is fairly simple, you just gotta throw the “Bolas” to the ladder, with each level representing different points, and the first player or team to score 21 points is the winner. Ladder ball is also a relatively relaxing game as you can have one drink in your hand as you play with the other. 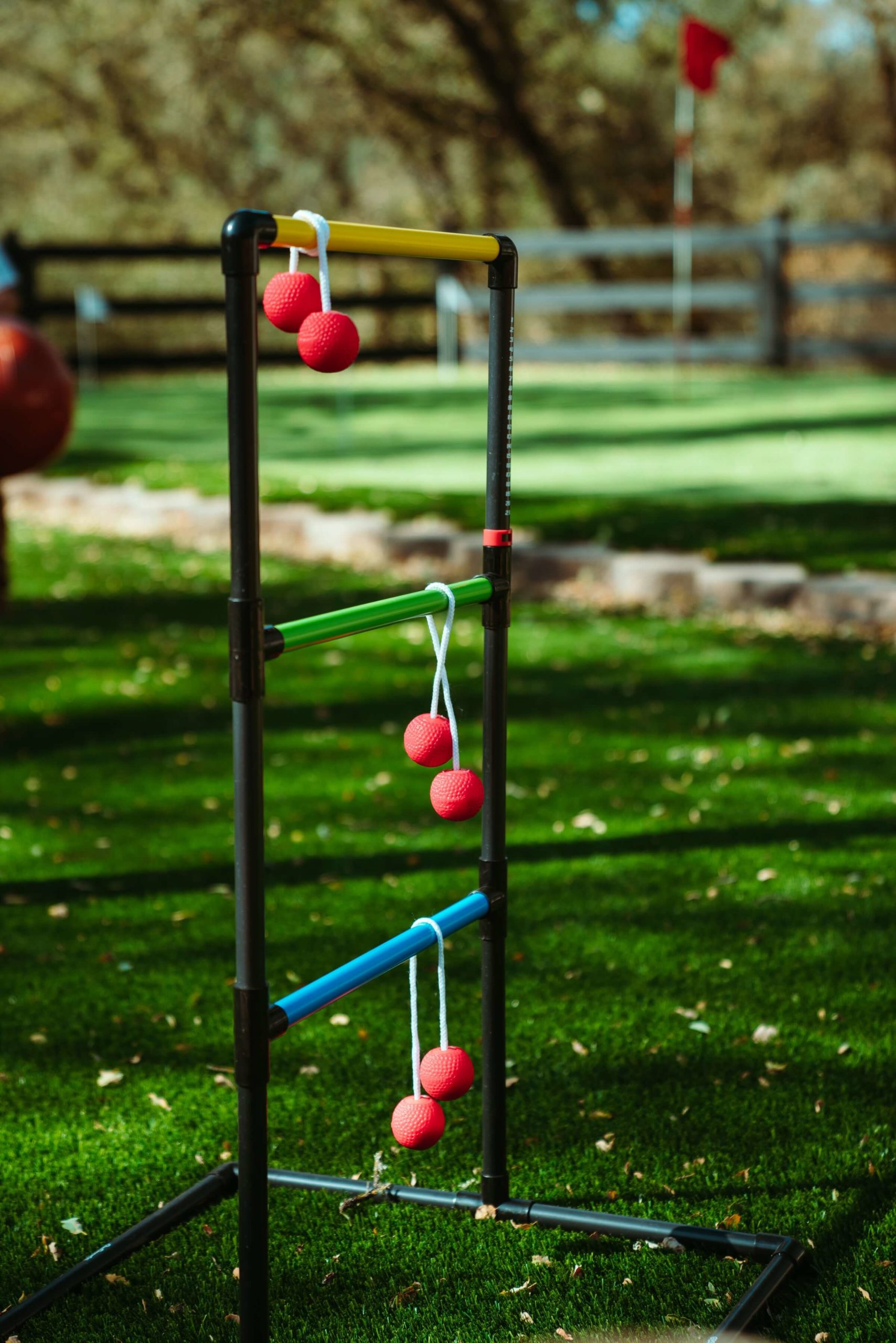 Fowling is a combination/hybrid of Bowling and Football. In Fowling. Instead of using a bowling ball to knock down the pins of the opposing team, you will be using a football. This hybrid of a game has slowly but surely become a popular game throughout the tailgating years and it’s a must for you to try as it’s sure to not disappoint! 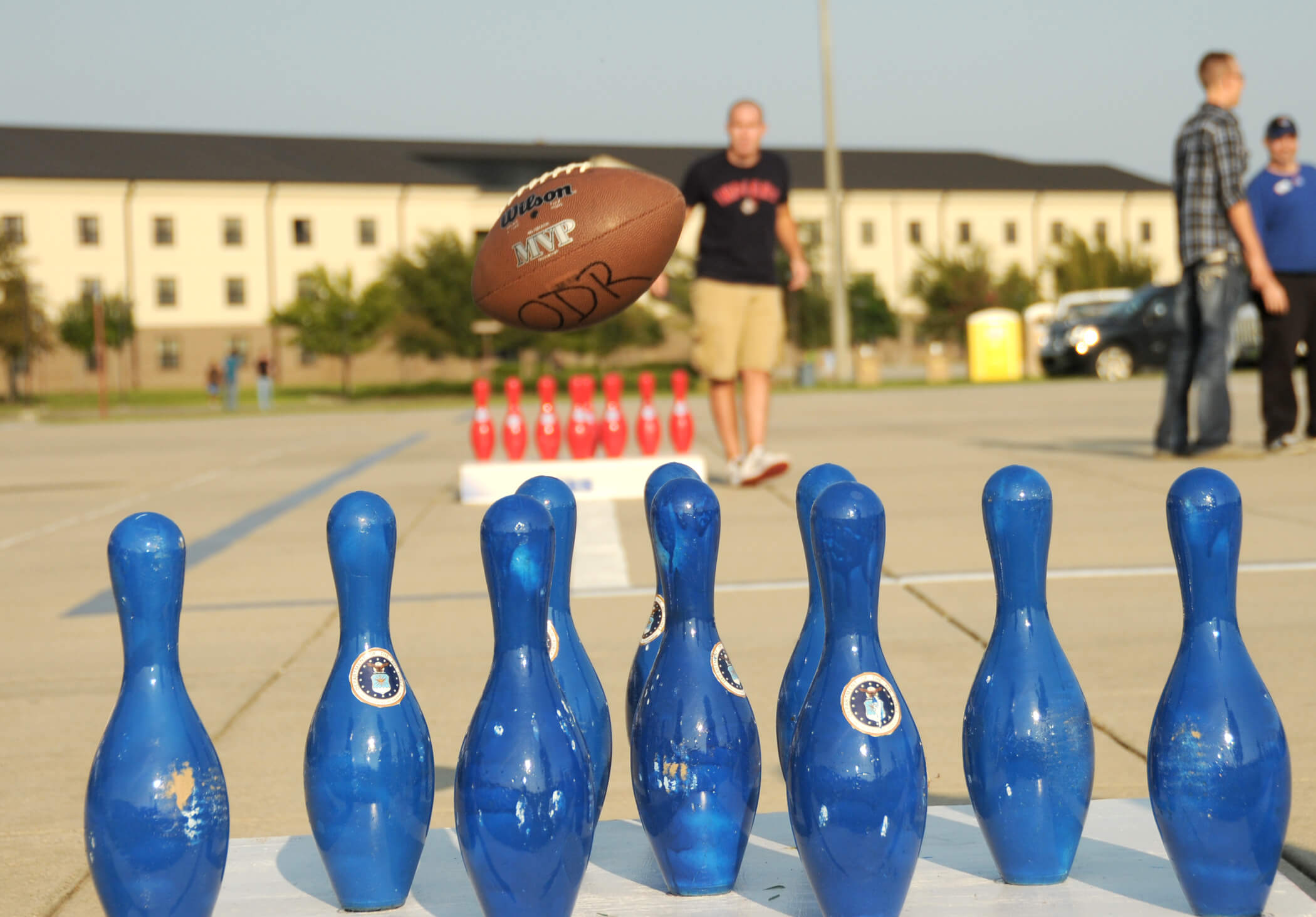 Another hybrid tailgate game, but this time for Golf and Table Shuffleboard. The goal here is to be the first one to score 13 points. Sholf has been another fan favorite for tailgate games and it’s not hard to see why as it’s relaxing and quick and it’s safe for the younger ones to play. 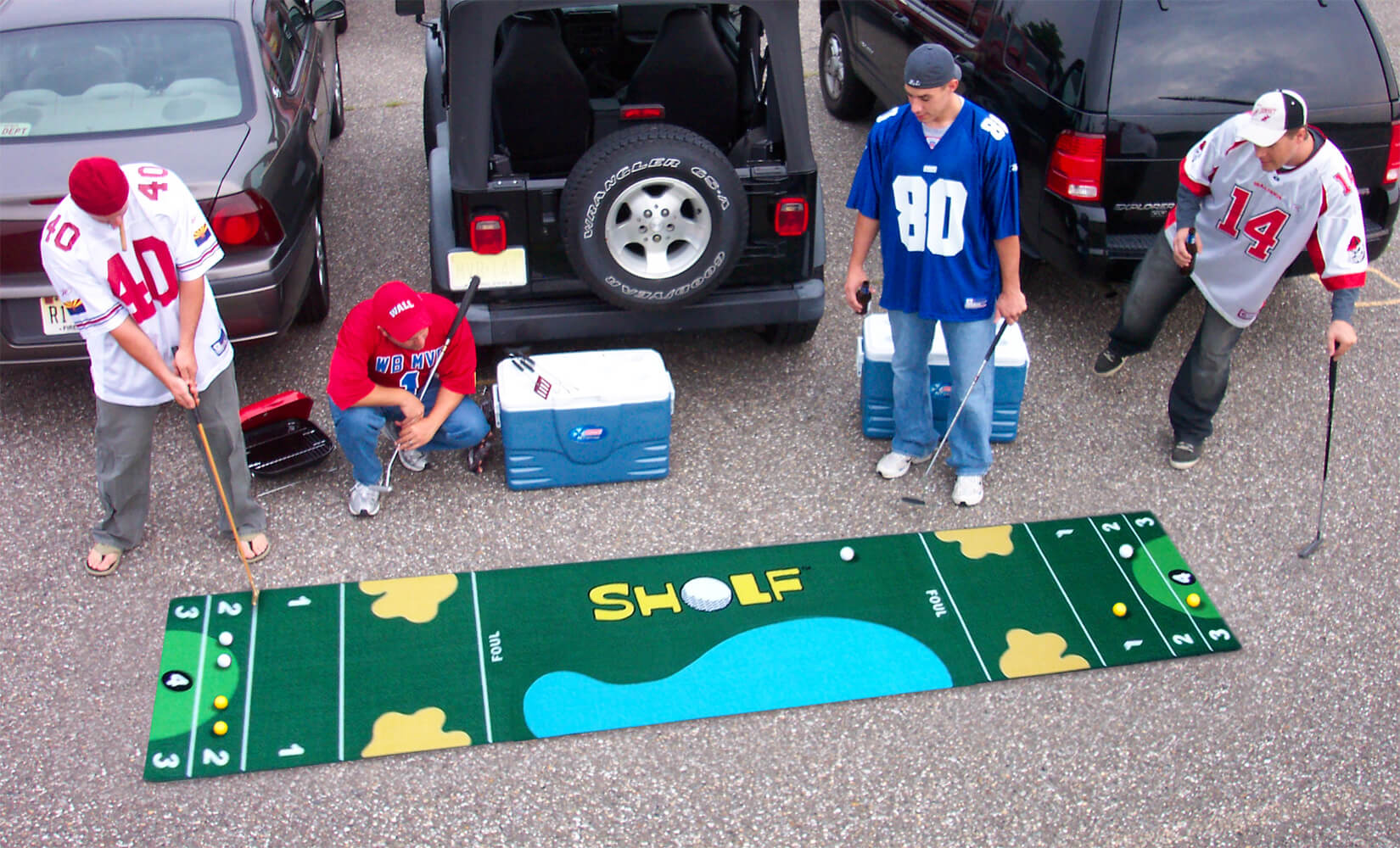 Another ultimate college drinking game makes its way to Tailgate parties, and most deservingly so. Kings Cup would involve playing cards and a huge cup in the middle where players would pour various drinks in it and the main “loser” drink its contents. What’s great about this game is its flexibility as the players get to determine what the cards would mean. It’s one the easiest but most fun ways to get the party started at a tailgate party. 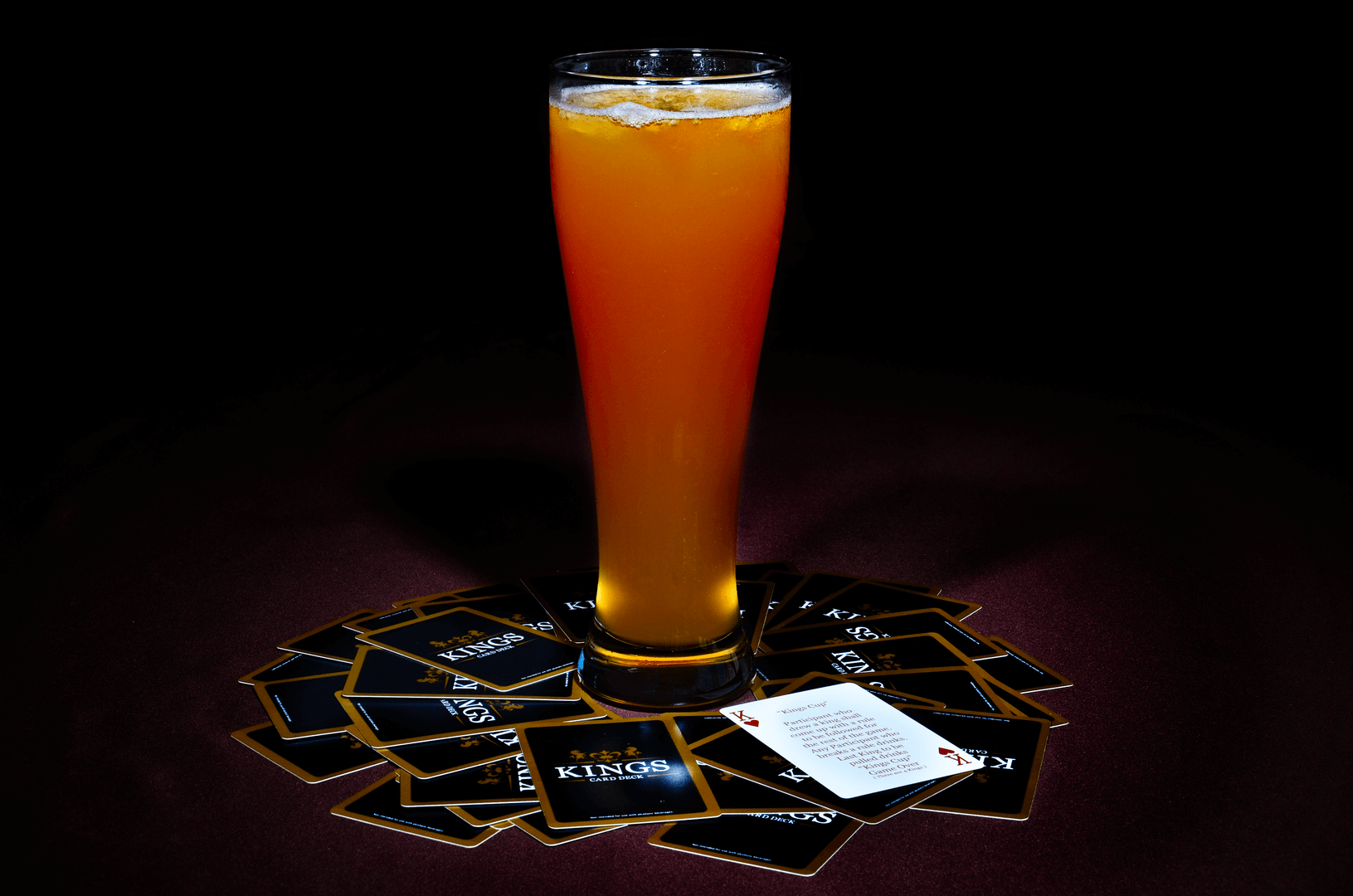 Kan Jam is the product of decades-long development and evolutions. Originally started in Buffalo, New York, the game was all about throwing a frisbee disc into a garbage can. Seeing that this can be improved, the now-popular tailgate game has evolved and now includes throwing a disc into a customized can with a tiny slot in the front. It definitely puts a twist in your average frisbee games. 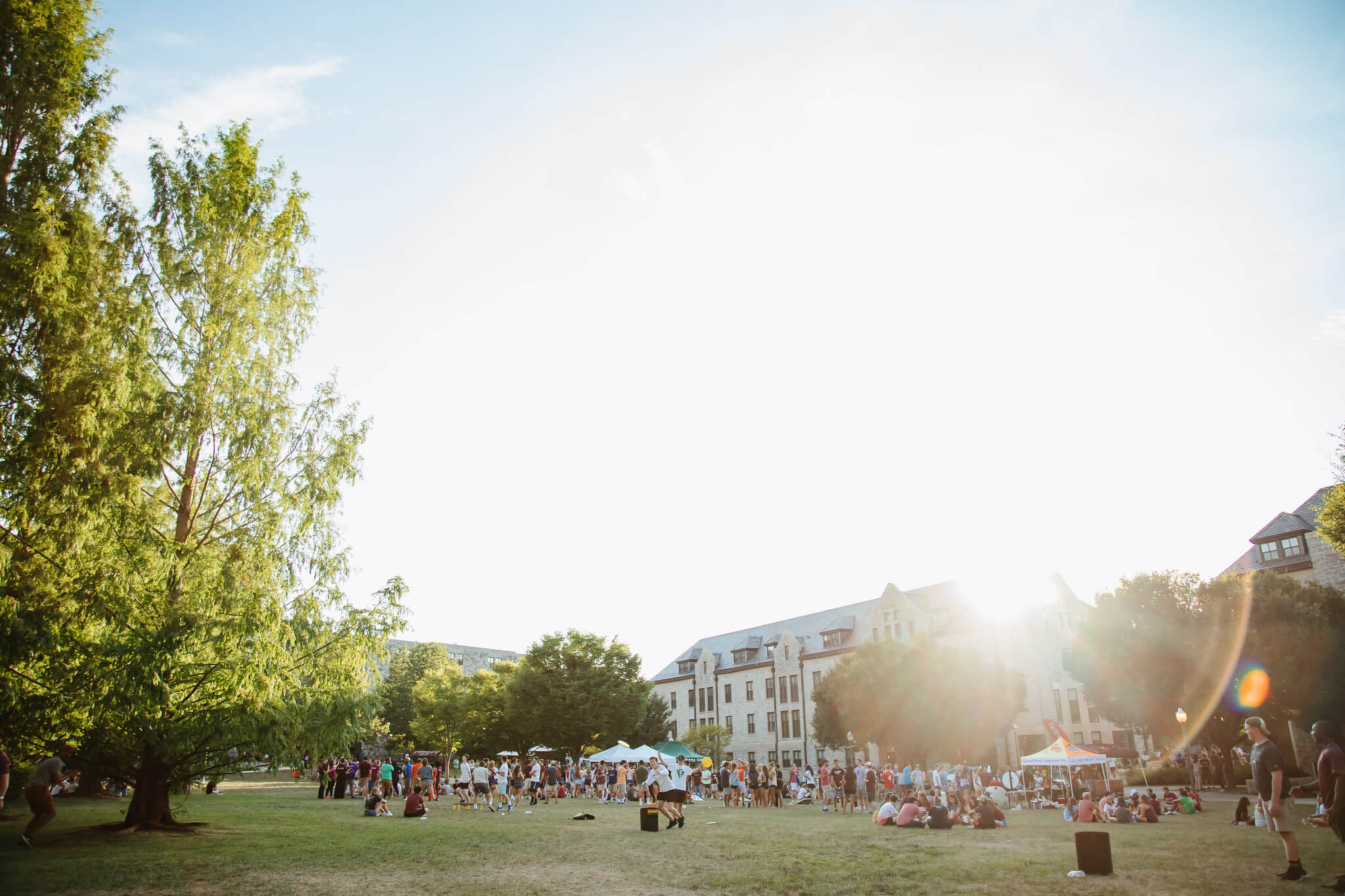 This game is more than just fun, it also brings quite a challenge for those who want to play. Washers is very much like the game of Horseshoes, where players toss washers into a cup or hole to score 3 points and 1 point if it landed on the board. The only difference it has from Horseshoes is that it’s relatively safer to play and easier to set up. This popular tailgate game can be usually seen in tailgates in The Grove at Ole Miss or in Georgia. 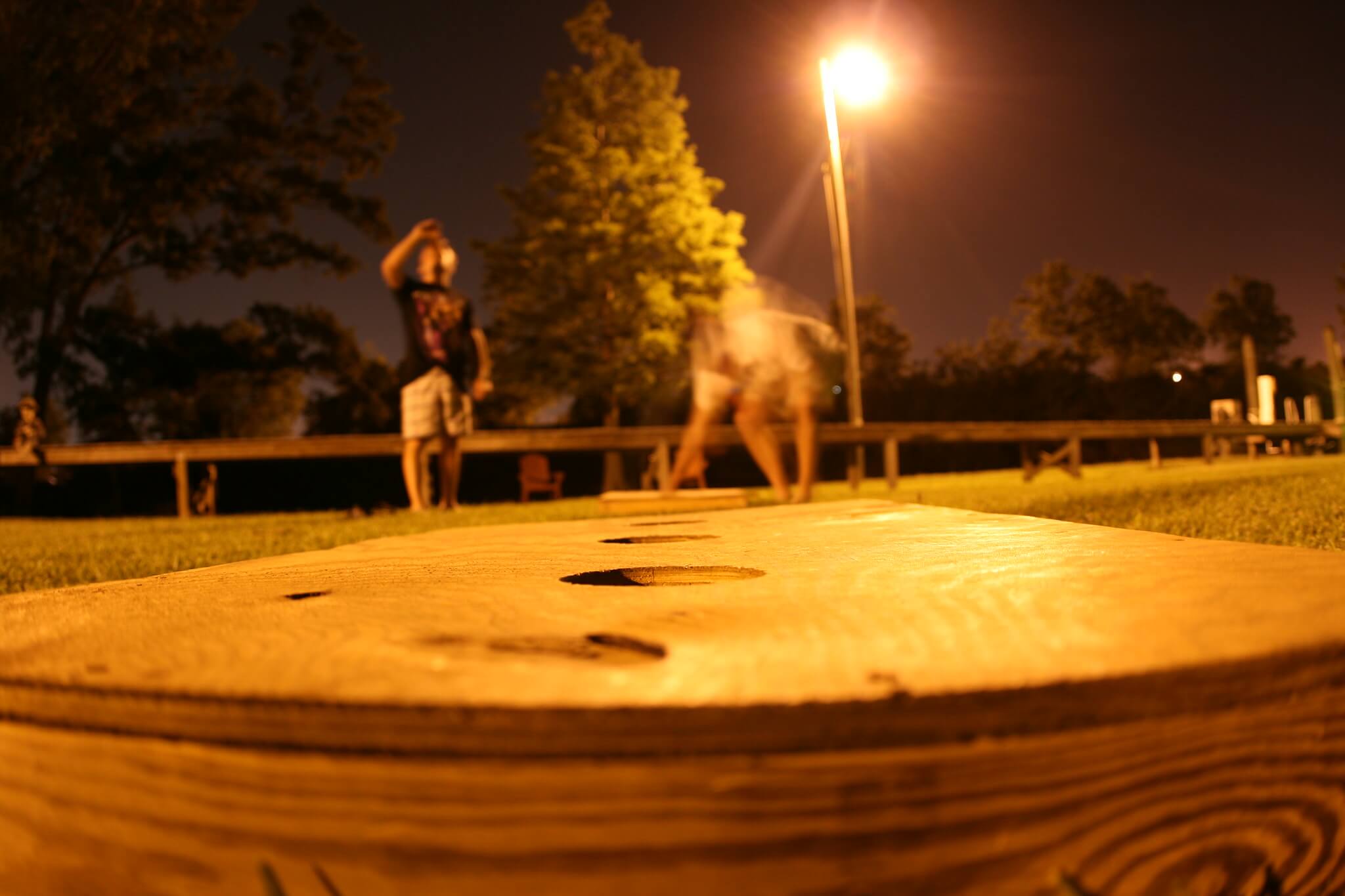 Spikeball is a relatively new game when it comes to tailgating. What’s most underestimated about this game is that it gets really crazy once it starts. Inspired by the popular sport of Volleyball, this 2-on-2  game entails each team three hits before you need to return the ball through the net to the other team. If the other team fails to return the ball, it’s a point for the opposing team. It gets pretty intense and it’s quite the workout, but one thing is for sure, it’ll definitely pump your adrenaline as you party with fellow sports fans. 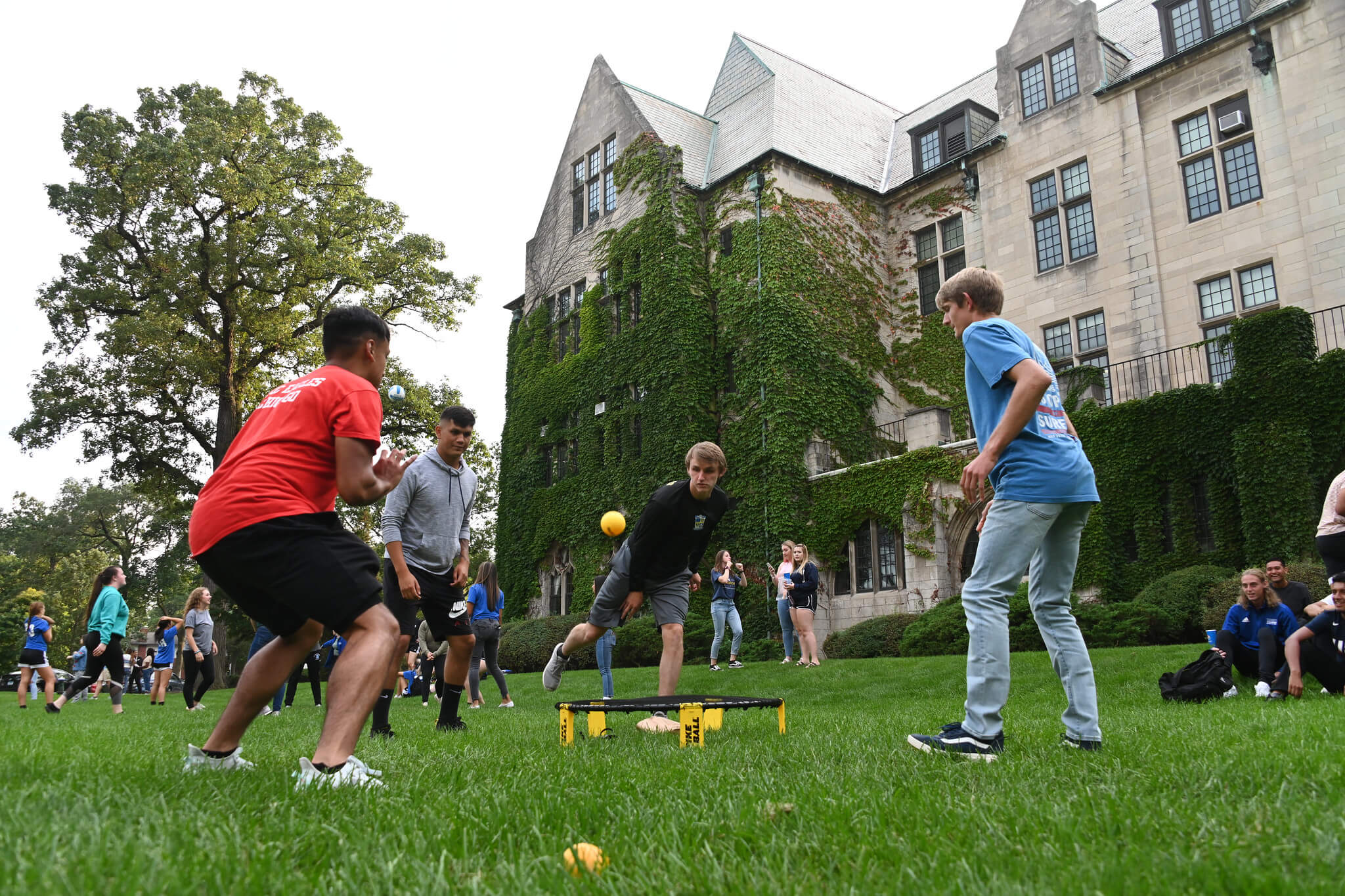 Quite the young one in the world of tailgating games, Bulzibucket involves soccer and hackeysack skills as this game requires you to toss, kick or do what it takes to get the balls into the bucket. The equipment is compact and the whole set up is very easy, and the best thing about it is it gives you a fun exercise with your friends. You can even decide to spike it up by making it a drinking game! You can never go wrong with it. 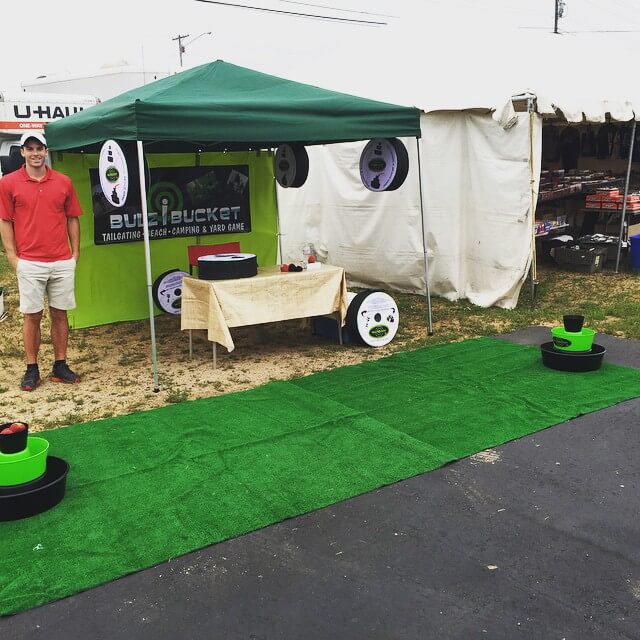 The very game to play when you want to get wasted as soon as possible. Dizzy Bat, aka Louisville Chugger is a drinking game in which players chug a full beer out of the holding end of a Wiffle ball bat. The other players would then count loudly on how long it took the player to finish the beer. The play must then spin around with for however long it took to finish the beer. After that, an empty beer can is tossed and the player must hit the can with the bat. If the participant misses, they must spin 3 more times and try again. If this won’t get you good and wasted, we don’t know what will! 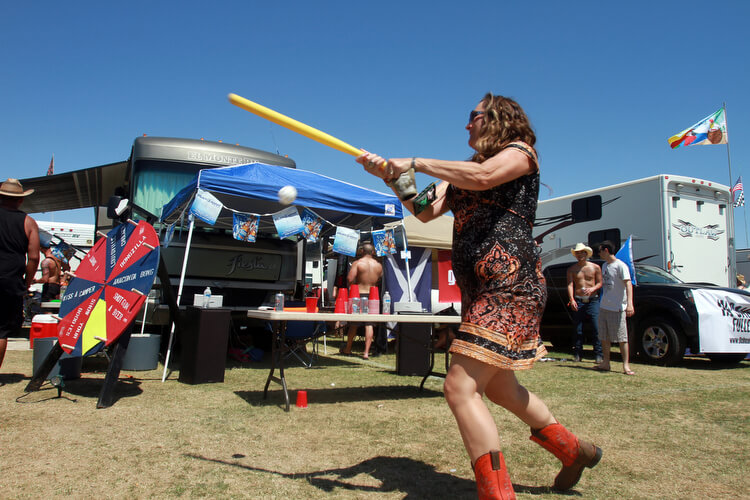