Love the bands in College Football? Check out our list of the best!

Big time college football fans know that there is more to the allure than just the action on the field when it comes to college football. Outside of the game itself, the band is probably the biggest part of the pageantry that goes on at a college football game, so it should come as no surprise we’re counting down the 15 best bands in college football.
Here are 25 bands that put on must-see shows that elevate attending these schools game from a “should go” to a “MUST GO!”

The Pride of Oklahoma has come a long way since their humble beginnings as a pep band in the early 1900s and today is one of the premier marching bands in the country having performed at numerous Bowl Games over the years. Additionally, the band won the Sudler Trophy in 1987. 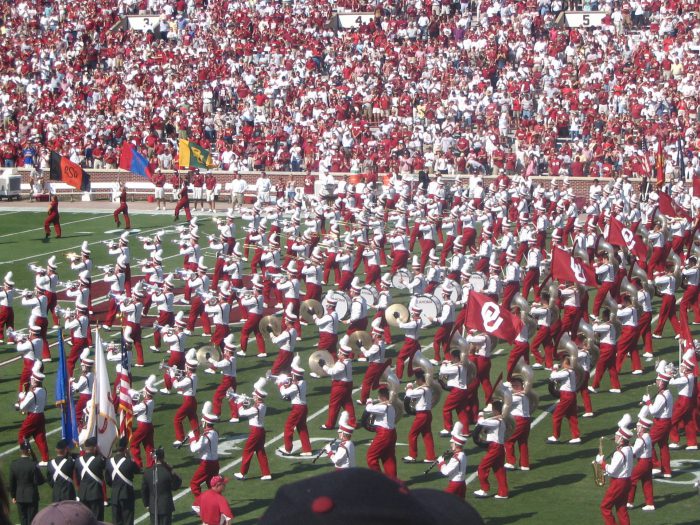 While small compared to most of the bands on this list, the 180 member Screaming Eagles have played at numerous events including the Macy’s Thanksgiving Day Parade and the Japan Bowl in Yokohama. 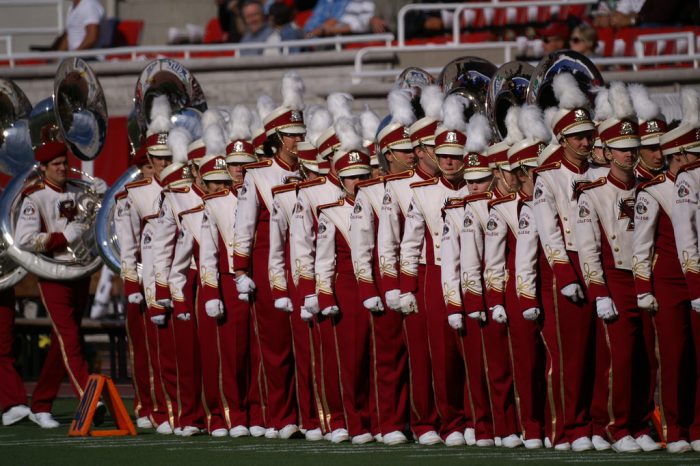 The 2002 Sudler Trophy winners were inducted into the Louisiana Music Hall of Fame in 2009. Also, band directors throughout the SEC voted the Tiger Marching Band the best in the conference and in 2012 the Huffington Post named them one of the “Top 10 College Marching Bands in the United States.” 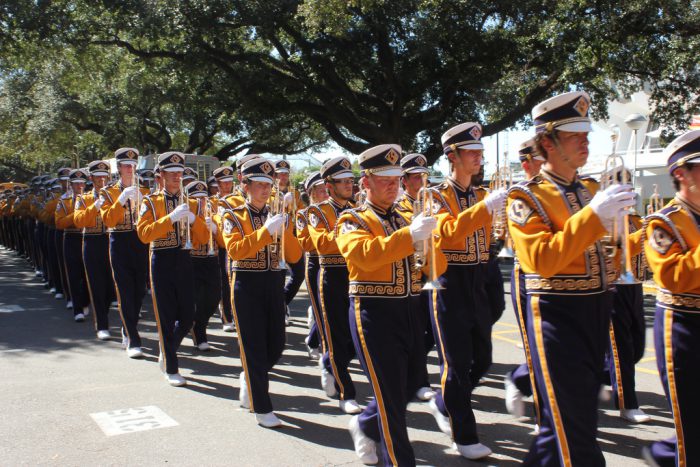 4. University of Florida “Pride of the Sunshine” Gator Marching Band

The over 360 member band has performed all over the world with its most notable appearance taking place at the 2012 Summer Olympics in London. The band also won the Sudler Trophy in 2013. 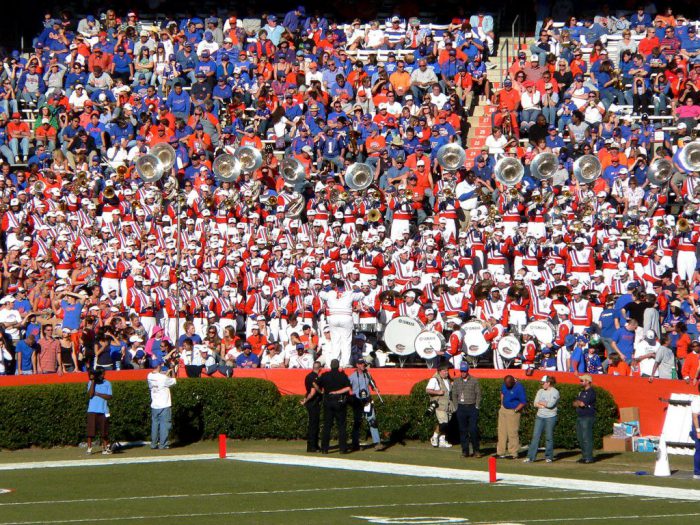 The Marching Blue Band has played at every major bowl game and had their photo appear in Vogue and W magazines in 2005. Additionally, the band became the first to perform at a major fashion show that same year. The band’s most famous routine is the Floating Lion Drill where they spell out “LIONS” across the field. 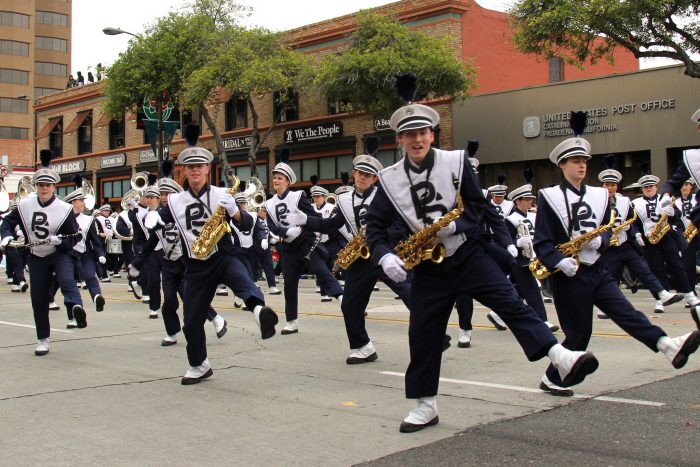 The Michigan band was the first band to appear at Yankee Stadium and the Rose Bowl in the same season and was the first Big Ten band to perform at the Super Bowl. They also were the first in the Big Ten to receive the Sudler Trophy, which they did in 1983. 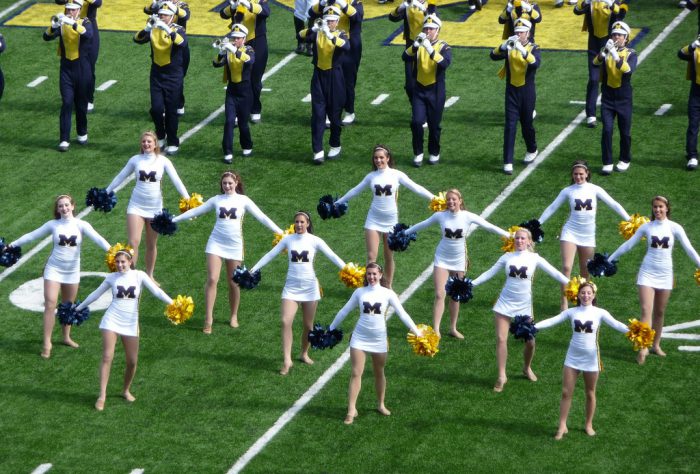 The Cornhusker Marching Band is one of the oldest in the country dating back to 1879. The band has toured Ireland and Continental Europe and was the recipient of the Sudler Trophy in 1996. They also appeared on an episode of Extreme Makeover: Home Edition in 2007. 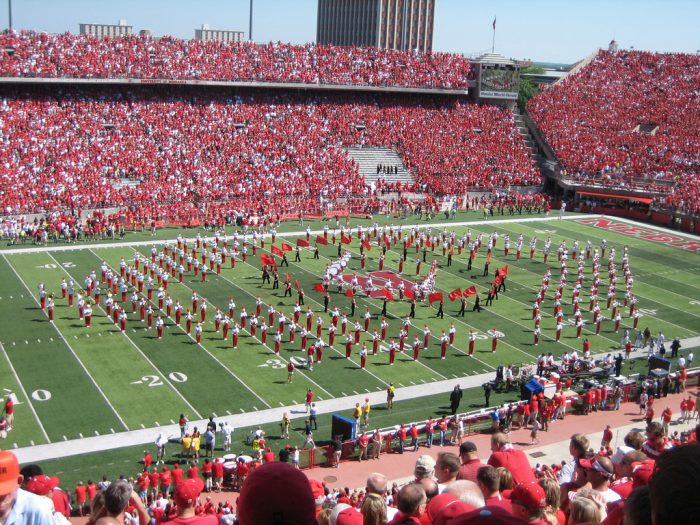 The 380 member band won the 2004 Sudler Trophy and was one of six bands to compete in ESPN’s Battle of the Bands. The band has also performed at three presidential inauguration parades and the 2008 St. Patrick’s Day Parade in Dublin. 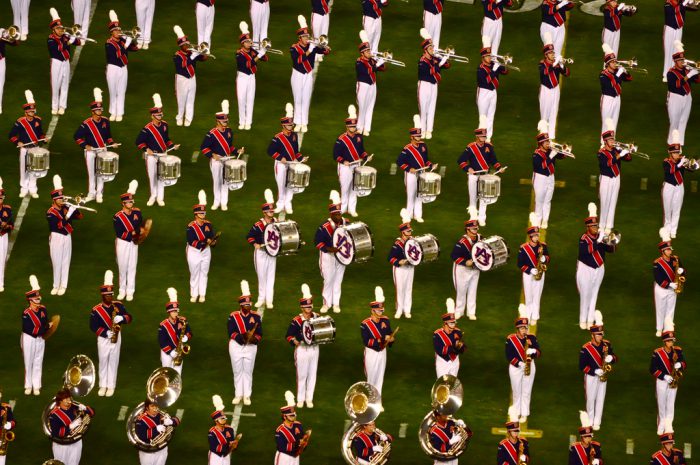 Jackson State’s band has performed halftime shows for several NFL teams including the Falcons, Lions, Saints, and Bengals. They’ve also played on TV several times including the Motown 30th Anniversary and 34th NAACP Image Awards. Additionally, the band is known as “Hollywood’s Band of Choice” and has over 300 members. 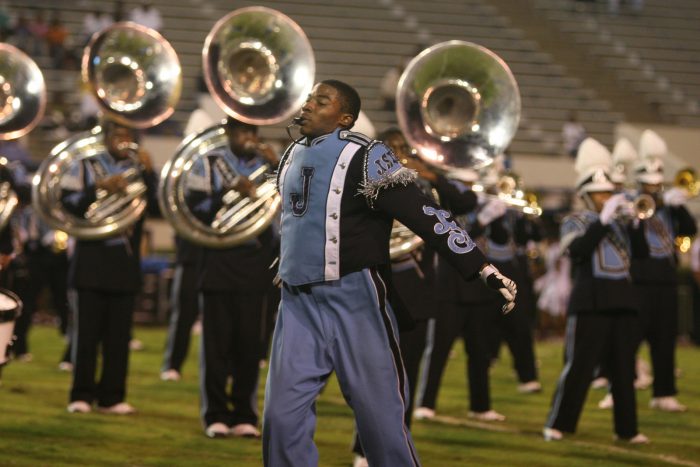 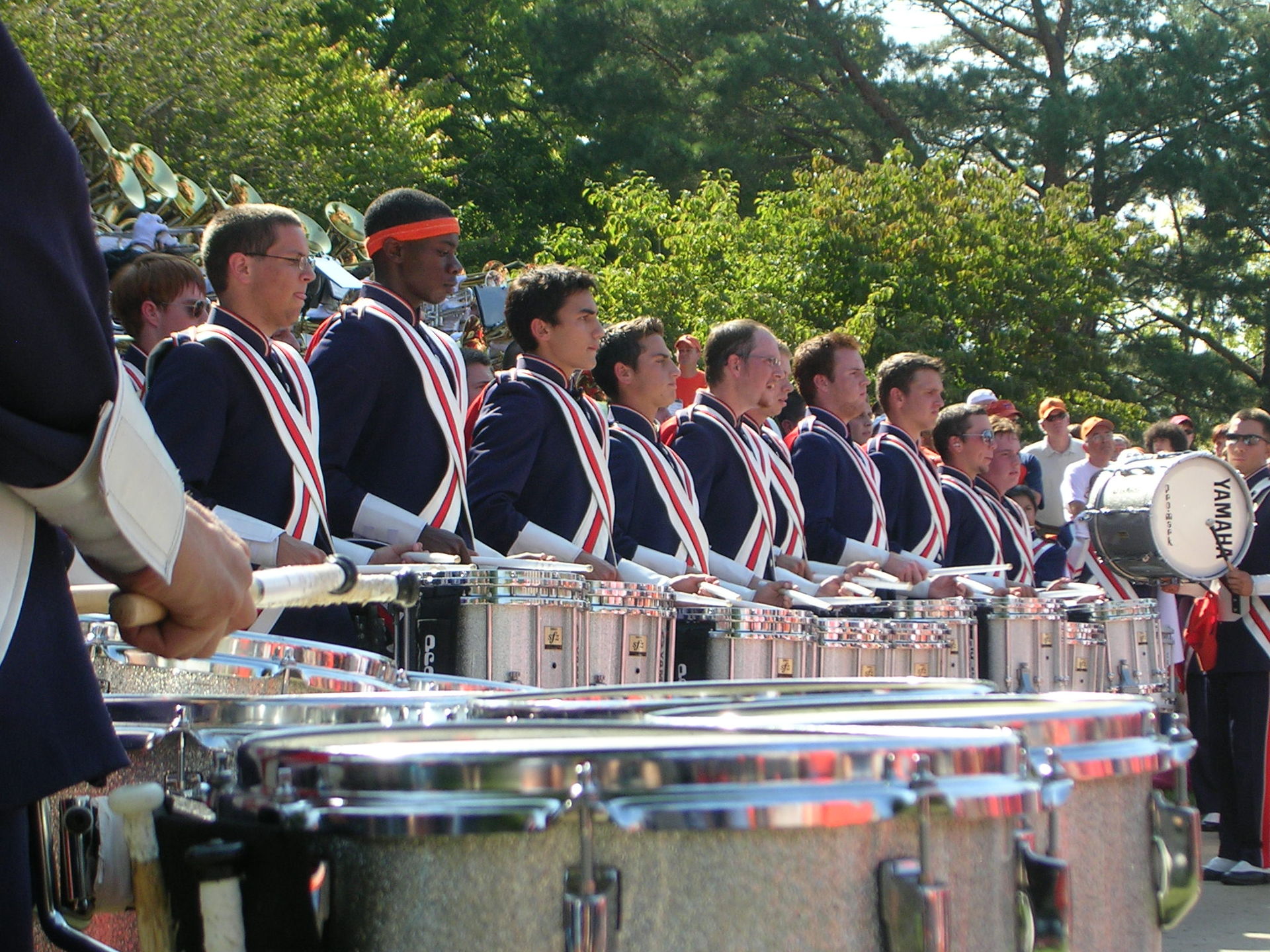 The Fightin’ Texas Aggie Band is the largest military band in the nation with over 400 members and is famous for winning the Sudler Award in 2001. Outside of performing at Aggies games, the band has also been at many presidential and Texas governor inauguration parades. 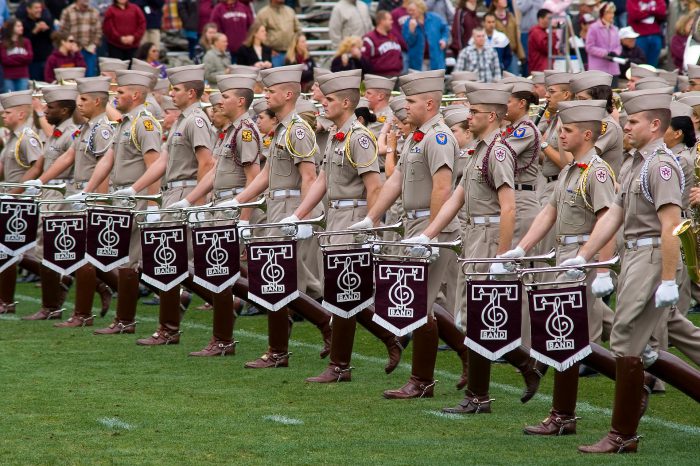 12. University of Notre Dame Band of the Fighting Irish

The Band of the Fighting Irish has toured around the world having played everywhere from Brazil to China. The band was declared a “Landmark of American Music” by the National Music Council in 1976. 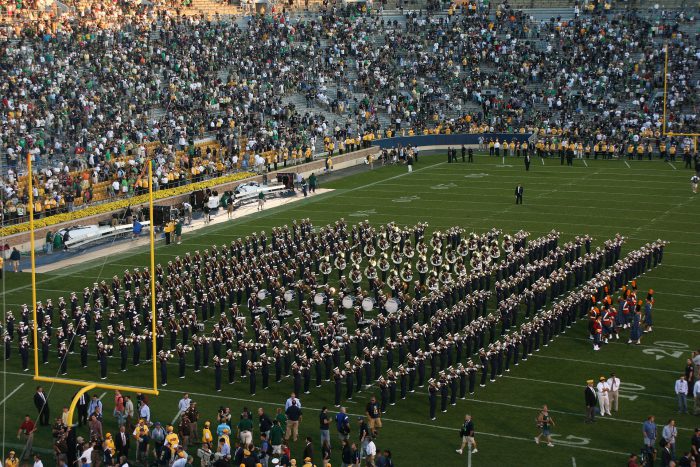 The Human Jukebox Marching Band has an app and has been recognized as one of the top bands in the country by several media outlets including USA Today and ESPN. The band is also famous for playing six Super Bowls, and the Saints returned to the Superdome in 2006. 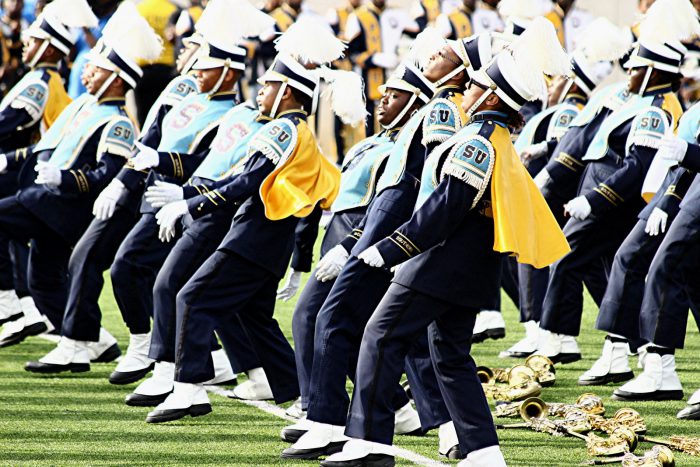 One of the unique things about the Cal Band is that it is run by students rather than the school’s music department. The band has made several appearances on TV including Wheel of Fortune and the Ed Sullivan Show. 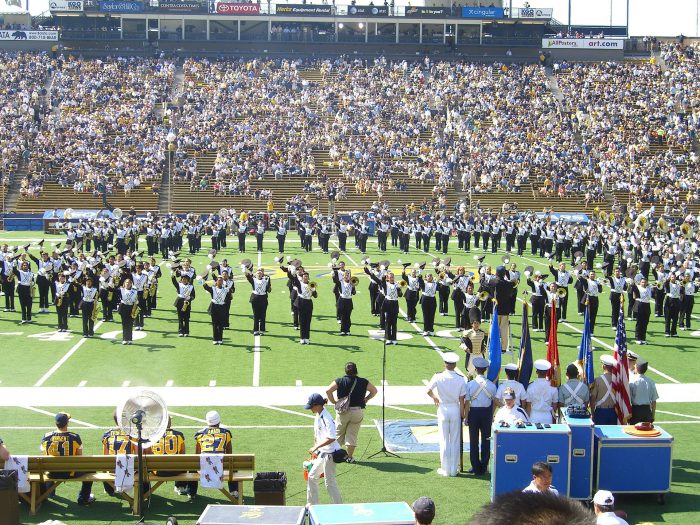 Originally named after the number of members of the band, today the 110 stands for the 100 percent effort the band puts into every performance. The Marching 110 have played a variety of major gigs including President Bill Clinton’s Inauguration and over 40 NFL halftime shows. 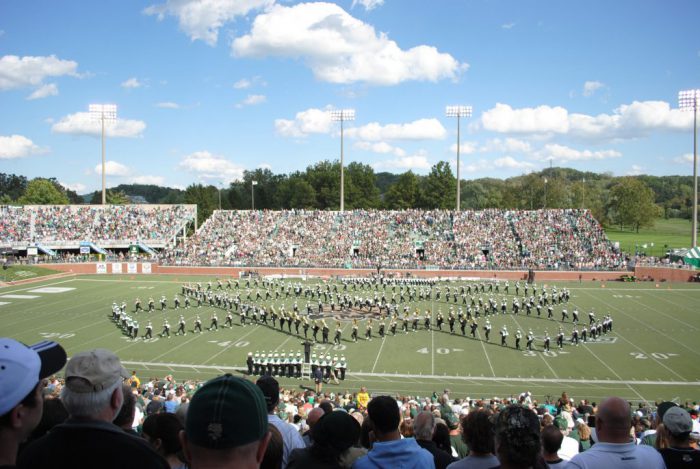 The “All-American” Marching Band made its debut a year before the Purdue football team and is the largest band in the Big Ten with 389 members. Neil Armstrong was a member of the band, and the band was the first band to play the opposing team’s fight songs at games. 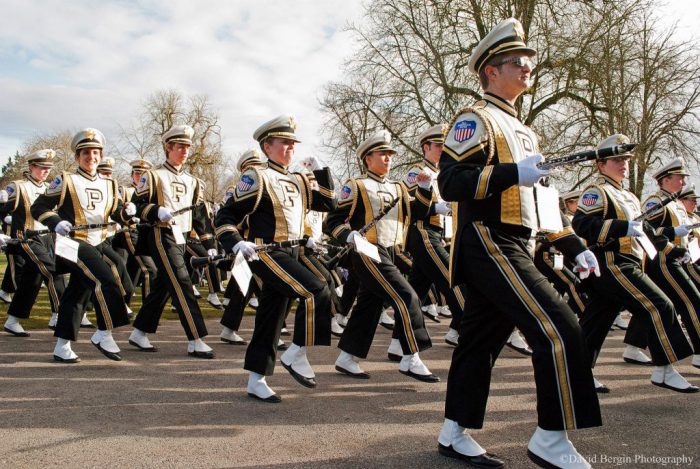 The Marching Royal Dukes won the Sudler Trophy in 1994 and have performed at three regular seasons NFL games and one NFC Championship Game. The band has also played at many presidential inauguration parades and performed abroad in Monaco, Ireland, and Greece. 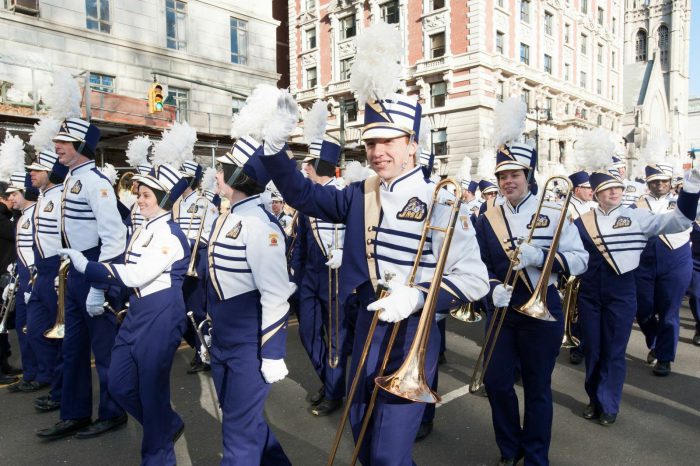 The Minuteman Marching Band played at the 1981, 1985, and 2001 Presidential Inauguration Ceremonies and won the Sudler Trophy in 1998. 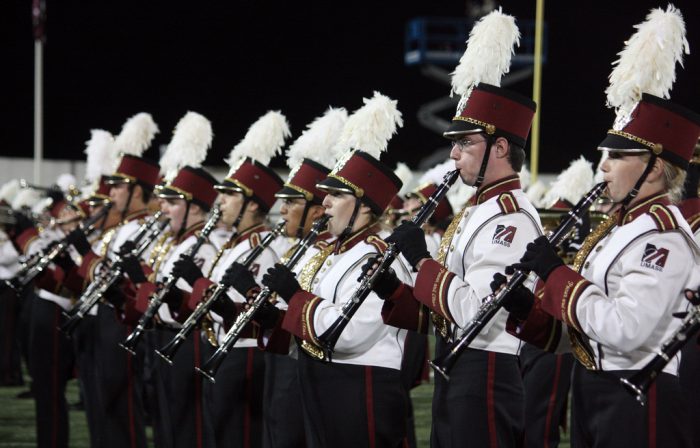 Longhorn Band’s famous Big Bertha drum made its debut in 1955 and has been a major part of their performances ever since. The band has played many notable performances including presidential inaugural parades, Super Bowl VIII, and the Today Show. Additionally, the band won the Sudler Trophy in 1986. 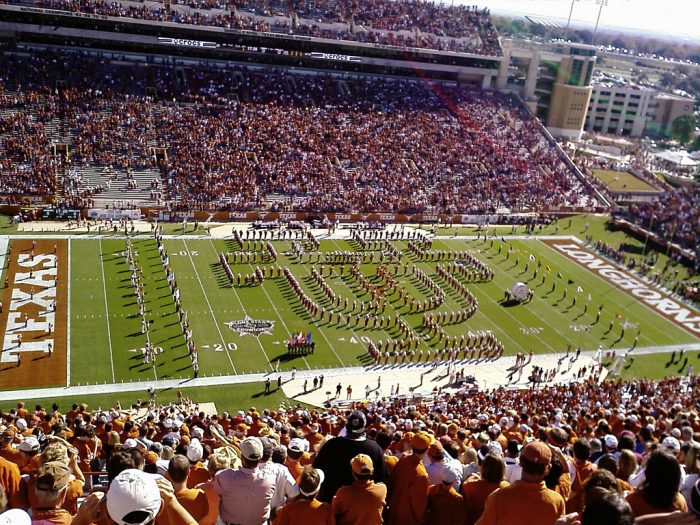 Famous for being run over during the Big Game in 1982, the Stanford Band comes in fifth on our list. The band has released 13 albums since 1967 and is famous for its wild antics. 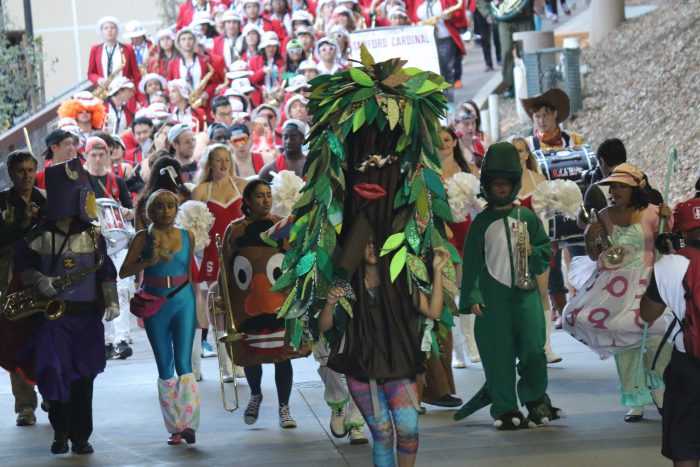 21. University of Tennessee Pride of the Southland Marching Band

The Pride of the Southland Band began in 1869 and is one of the oldest marching bands in the country. The band has represented Tennessee at 12 straight Presidential Inaugurations and has played at numerous bowl games. 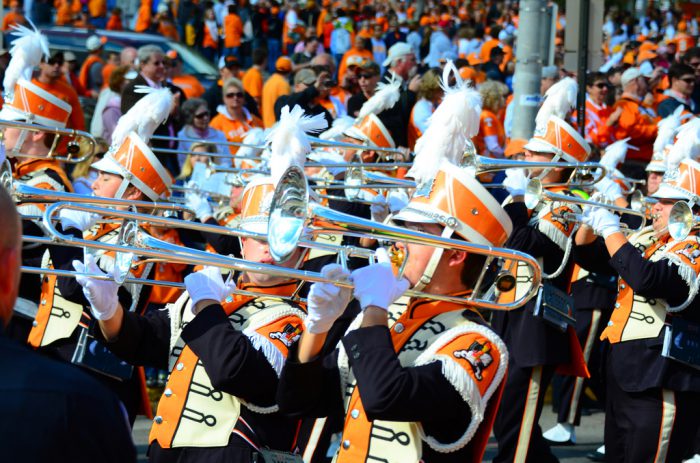 The Marching “100” have come up with over 30 techniques, which have become standard among high school and collegiate band throughout the country and has been featured in many publications over the years. Famous performances by the band include the 1968 AFL All-Star Game and Super Bowl III. 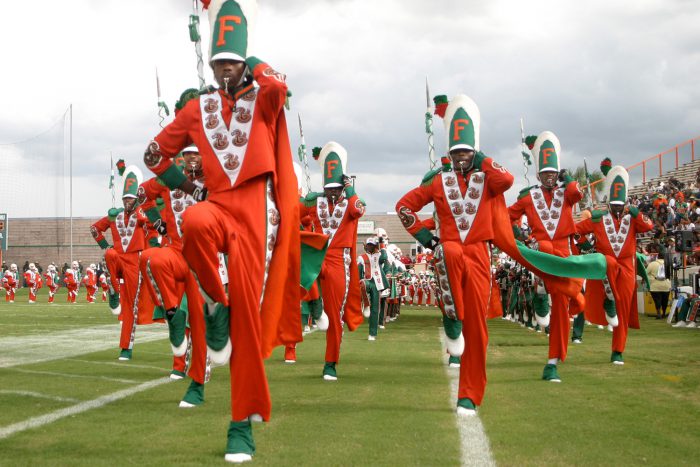 Famous for their Script Ohio routine, the Ohio State Marching Band provides must see game day entertainment. The band’s performance of Michael Jackson’s “Bad” during halftime of the Buckeyes 2013 game against Iowa has received over 12 million views on Youtube. 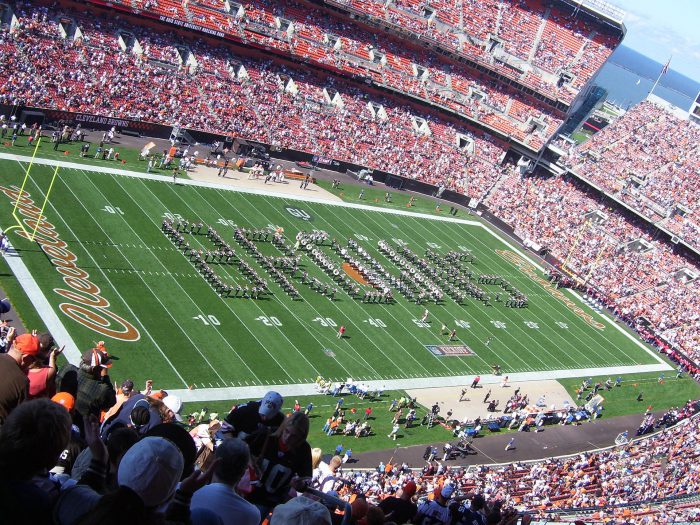 The UCLA band has made numerous international appearances including Tokyo’s Mirage Bowl and holds the honor of winning the 1993 Sudler Trophy. The Bruin Marching Band has also appeared in over 25 films. 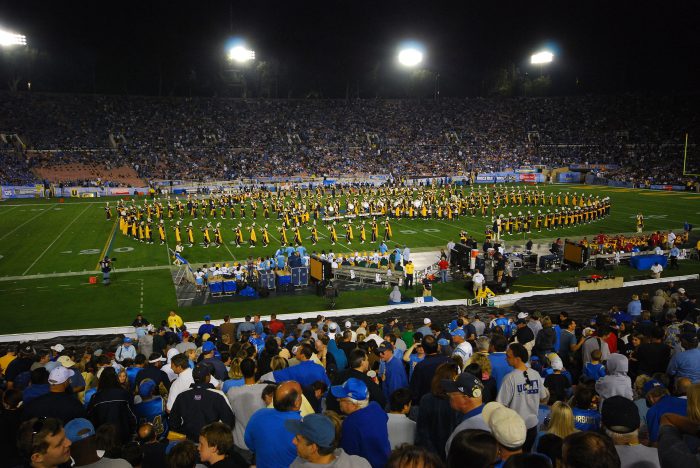 The number 1 band in college football is USC’s Trojan Marching Band. The band has played every Trojans home and road game since 1987 and is known as “Hollywood’s Band” due to the large amount of appearances the band has made with celebrities. 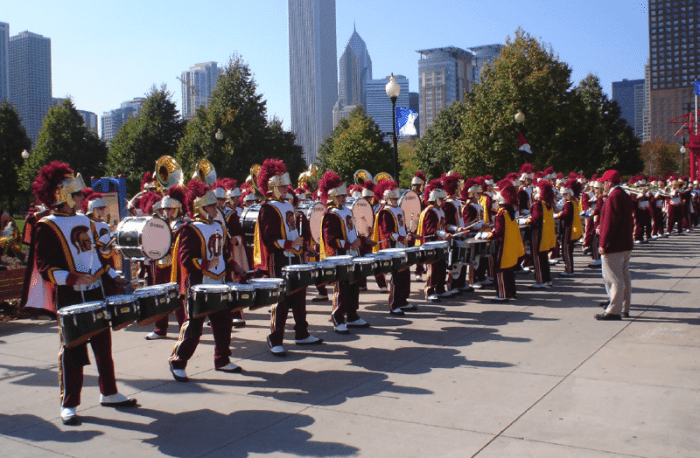