The only time when family fighting is encouraged, during in-state rivalry games!

The biggest game of the year for many college football teams throughout the country is their matchup with their hated in-state rival. These rivalries are not only extremely bitter, they also divide friends and family making a victory in these games even sweeter.
Here’s our list of the 25 best in-state rivalries in the FBS.

The Penn State – Pitt rivalry sneaks into our list at number 25. There have been many fierce encounters between these two rivals over the years, including a 19-10 Penn State victory that propelled them to the national championship in 1982, however, the two didn’t meet for sixteen years from 2000 to 2016. Hopefully, this renewed rivalry will create more memorable games in the near future. 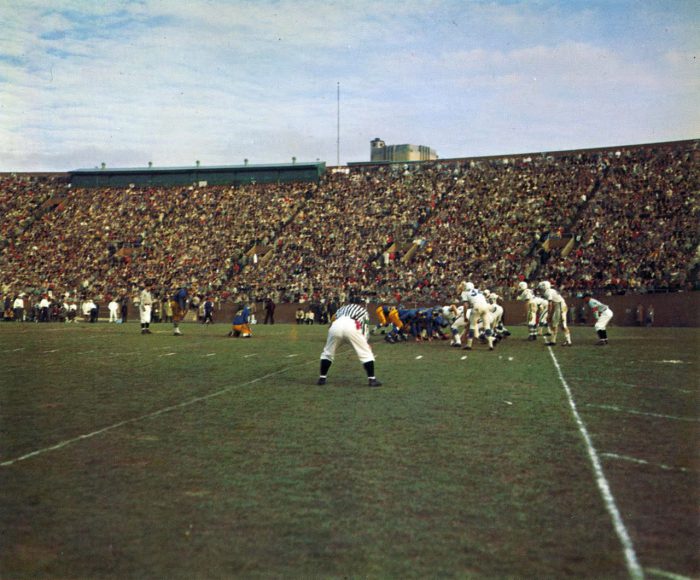 North Carolina and Duke are much bigger rivals on the hardcourt, but there is still plenty of hate between these bitter rivals when they meet on the gridiron. The winner walks away with the Victory Bell and bragging rights until things really heat up on the court. 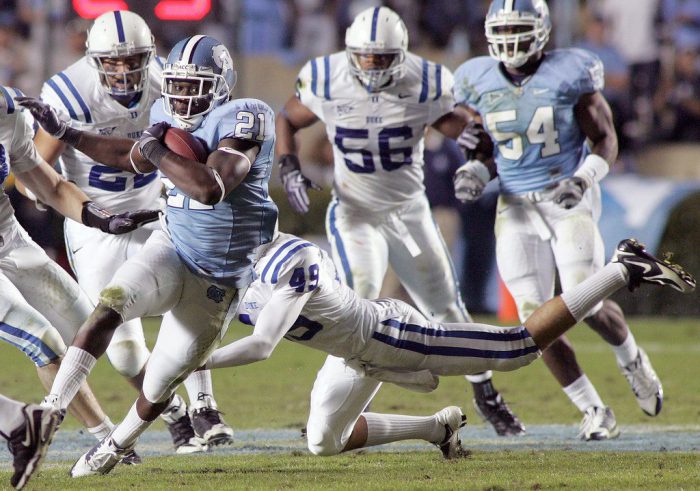 The rivalry between these two Colorado based schools dates back to 1893 and has become such a big deal that in 1998 the rivalry was moved to Denver’s Mile High Stadium. If you want to hold your head high then you better hope your school wins this one. 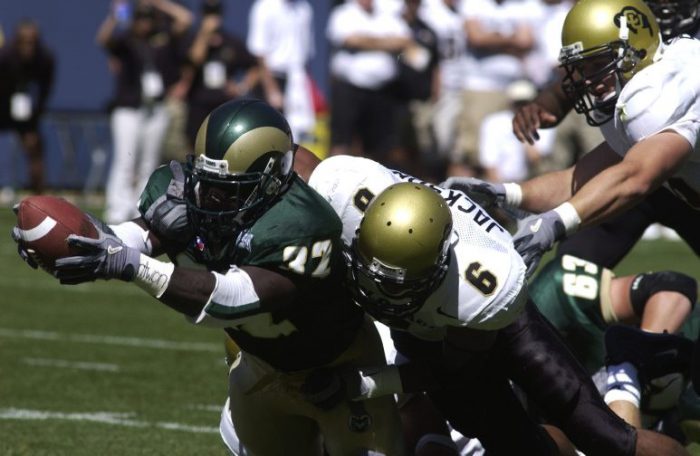 Vanderbilt and Tennessee are founding members of the SEC, so when these pioneers play, everyone comes to watch. This in-state rivalry has been played for over a century as these bitter rivals have battled 109 times since 1892. 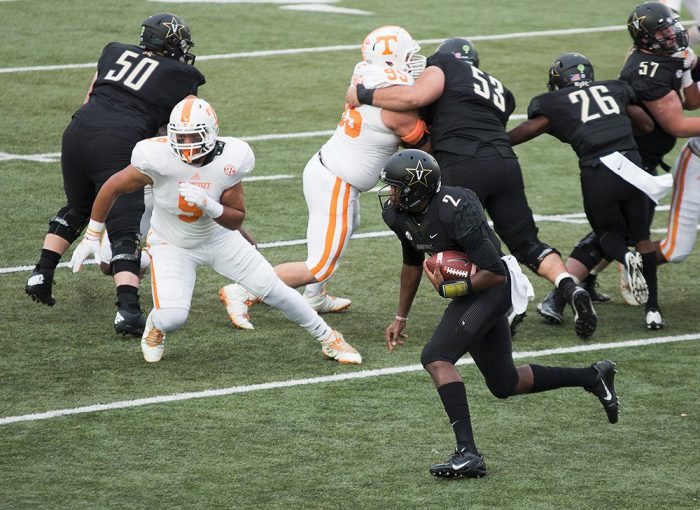 Another age-old rivalry, Notre Dame and Purdue have been playing since 1896. Things really heated up in this rivalry in 1957 when the Sheleighly Trophy was introduced, unfortunately, it is unknown when this rivalry will return due to Notre Dame’s move to the ACC for all other sports. 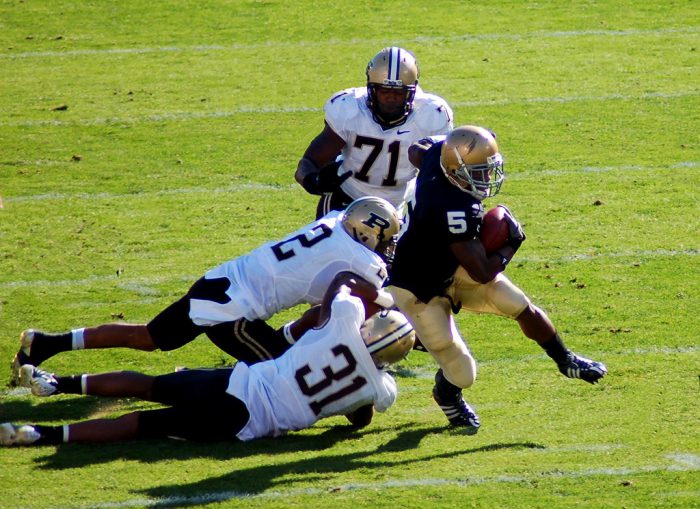 The Kansas-Kansas State game is one of the most anticipated of the season with the winner taking home state supremacy and the Governor’s Cup. One of the most contentious points in the rivalry took place in 1980 when the Jayhawks forfeited the 1980 meeting due to an ineligible player.  To this day the Jayhawks count it as a win whereas the Wildcats count it as a loss. 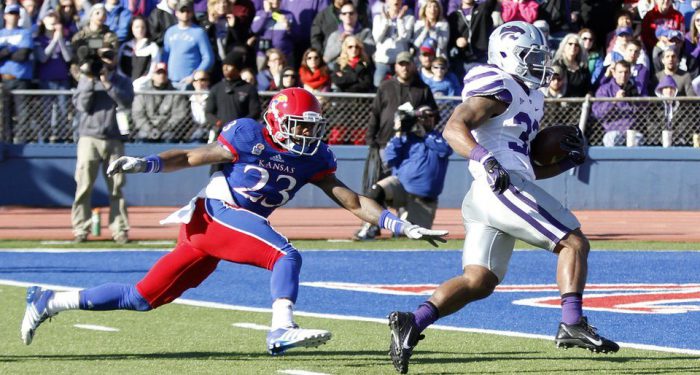 These two schools are the largest in Indiana, and have been competing for the Old Oaken Bucket since 1925. Because of the schools are close proximity, you’ll find plenty of both teams fans at the game regardless of the location, making this one of the most exciting games during the football season. 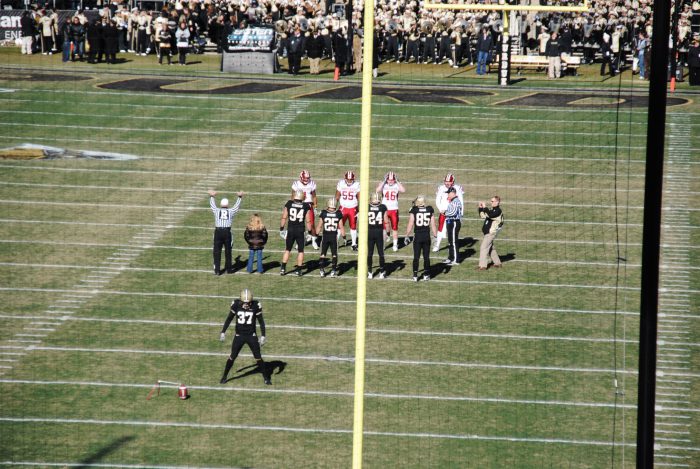 Each year the winner of the game takes home the Cy-Hawk trophy as well as bragging rights. Students from both schools use this game as an opportunity to try and outdo each other in tailgating, making it an intense rivalry both on the field and in the parking lot. 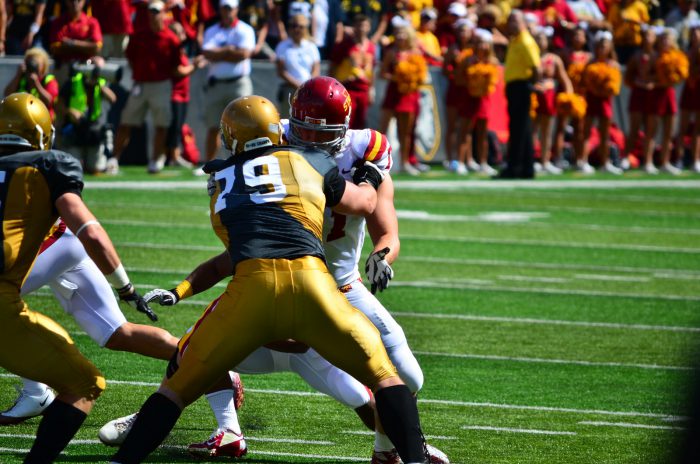 While Kentucky and Louisville are more well known for their exploits on the hardwood, the Kentucky – Louisville football rivalry is also very intense.  The series is tied at 14 wins a piece and has been played every year since 1994. 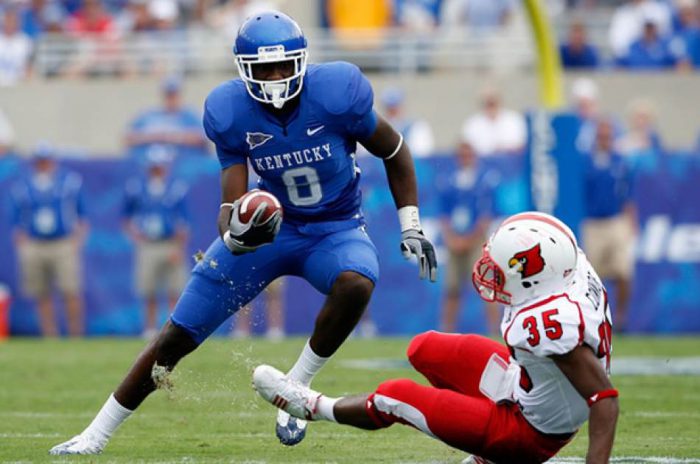 The Commonwealth Cup is awarded each year to the winner of the Virginia – Virginia Tech football game and dates back to 1895. In recent years the Hokies have dominated the rivalry winning the last 12, but the rivalry remains fierce. 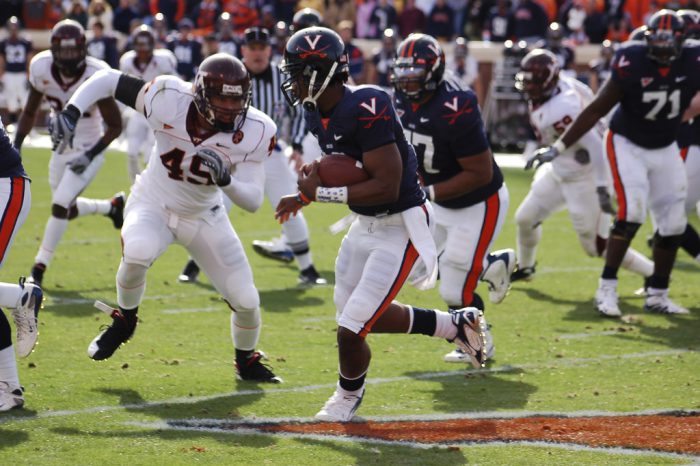 University of Oregon and Oregon State are each other’s fiercest rival, as the proximity between the two campuses means many make the trip from Eugene to Corvallis and vice versa. The rivalry is also one of the oldest in college football, dating back 1894, and the winner takes home the Platypus Trophy, which was lost for 40 years until it was found in 2005. 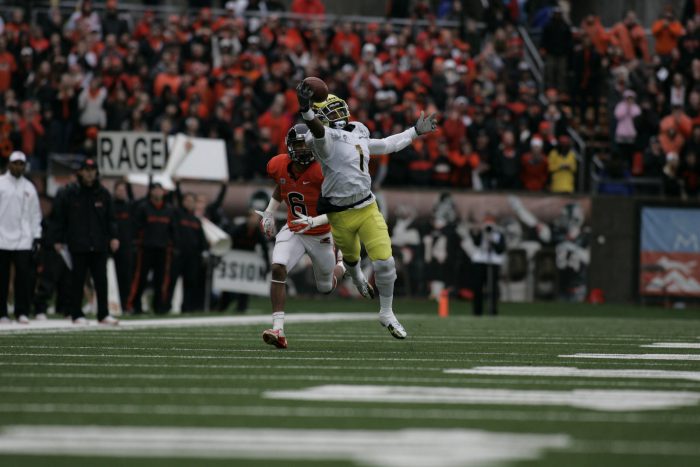 The Territorial Cup is awarded annually to the winner of the Arizona-Arizona State game. These two in-state rivals have been fighting over the Territorial Cup since 1899 making it the oldest rivalry trophy in the NCAA. 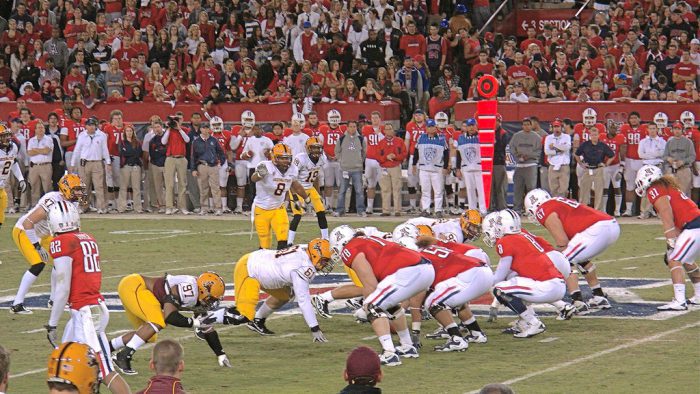 Cal and Stanford have been arch rivals since 1892 making it the oldest college football rivalry in the West. The rivalry has produced many memorable moments over the years with the most famous coming in 1982 when the Cardinal band entered the field with time left to play as Cal returned the game-winning touchdown. Each year the winner of The Big Game takes home the Stanford Axe. 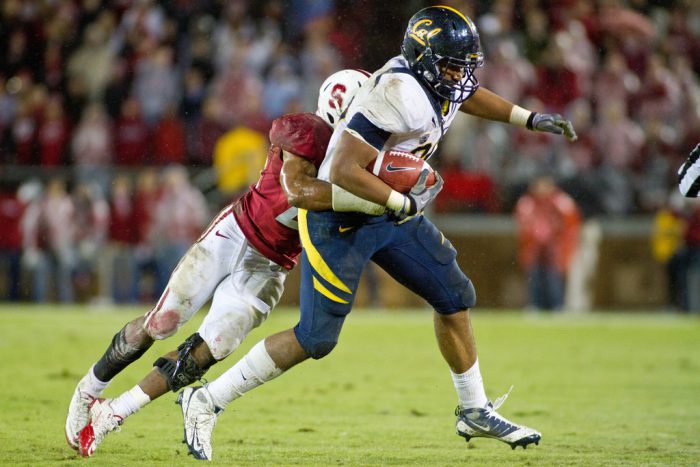 Bedlam is the biggest home game of the year for both schools and extends beyond just football as the series is contested in a variety of sports. Although OU holds a substantial lead in the all-time series the rivalry is still strong between these two schools and in recent years has been particularly intense. 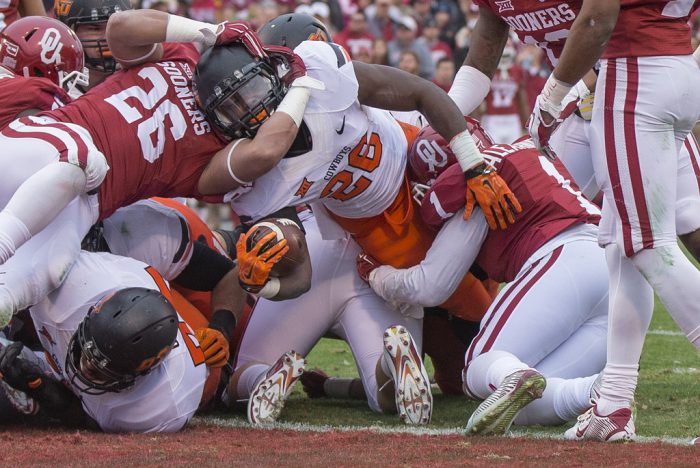 The Apple Cup is contested each year between Washington and Washington State, and dates back to 1900. The rivalry is fueled by the vast difference in culture between the eastern and western parts of the state, so winning the Apple Cup carries plenty of bragging rights. 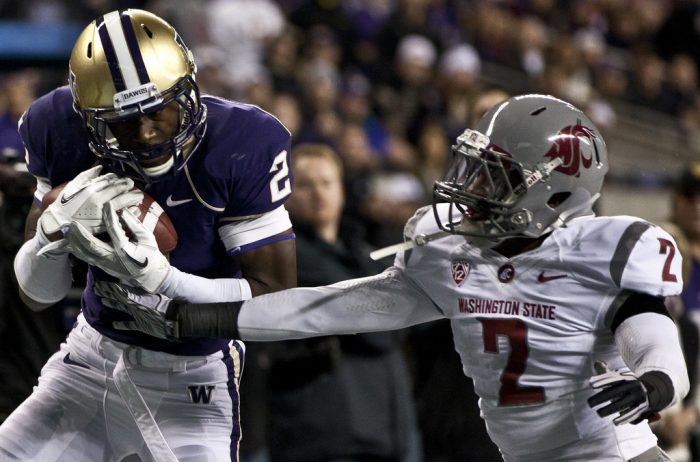 The term cross-town rivalry doesn’t accurately describe how interconnected these two fan bases are and thus the intensity of this annual rivalry. The two schools are both located in the city of Los Angeles with just twelve miles separating the two campuses. During a few seasons in the 1980s the two schools both played their home games at the LA Coliseum and as a result when they played each other both teams wore their home uniforms, a tradition that was rekindled in 2008. 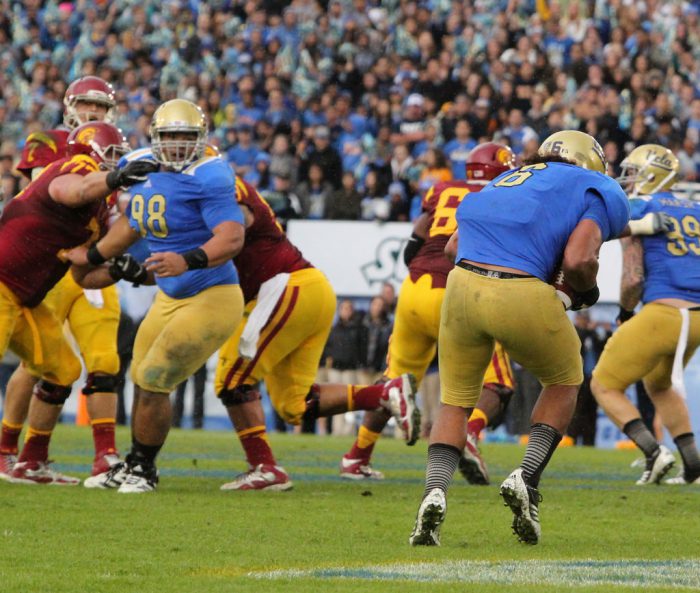 The Florida State-Miami rivalry began in 1951 and has been particularly heated since the late 1980s as both teams have found themselves near the top of the rankings in recent years. Field Goals have been particularly pivotal in the rivalry having decided several of the most famous contests including Wide Right I, II, III, and IV as well as Wide Left. 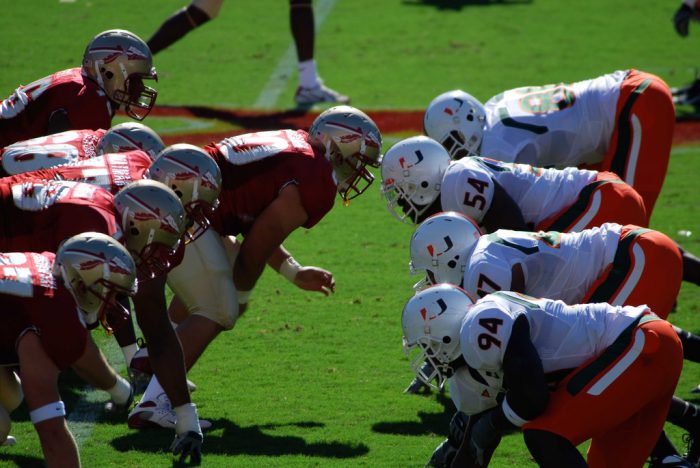 The atmosphere at Florida-Florida State games feels almost like the National Championship Game. The most important matchup between these teams was the Sugar Bowl rematch at the end of the 1996 season in which Florida avenged their only regular season loss and won their first national championship with a 52–20 win over Florida State. 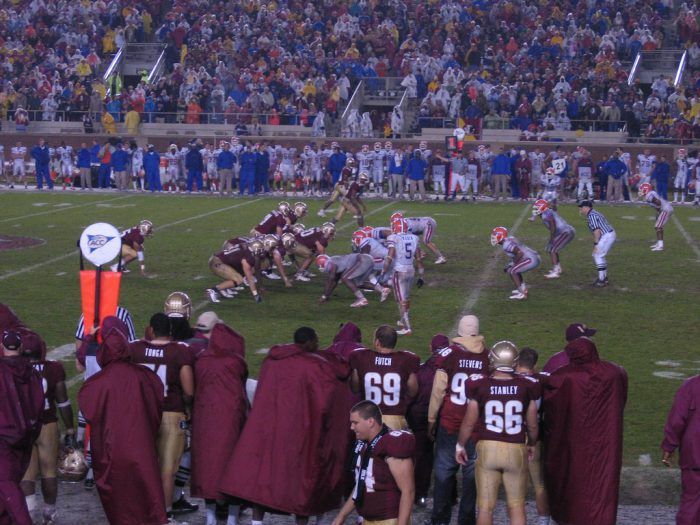 The rivalry between the  BYU Cougars and Utah Utes is nicknamed “Holy War” due to the stark contrast between the cultures of these two Utah-based institutions, and has been played since 1896. The winner of the annual contests walks away with the Beehive Boot and bragging rights. 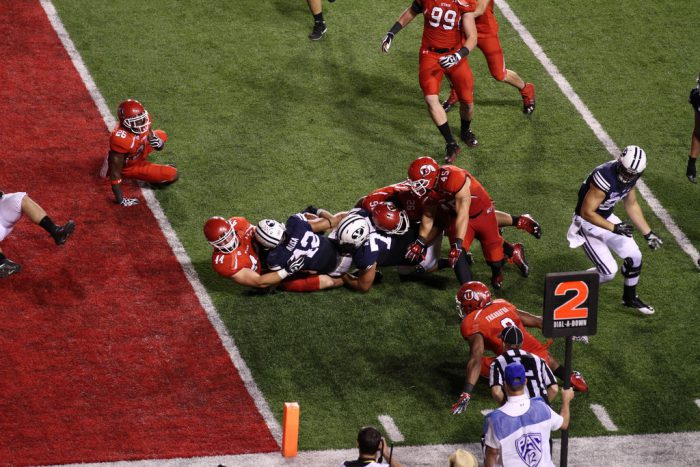 The rivalry between these two began when Mississippi State had to protect their goal posts with wooden chairs from Ole Miss fans and has escalated ever since. Today the winner of this clash walks away with the Golden Egg and bragging rights over their fellow Mississippi residents. 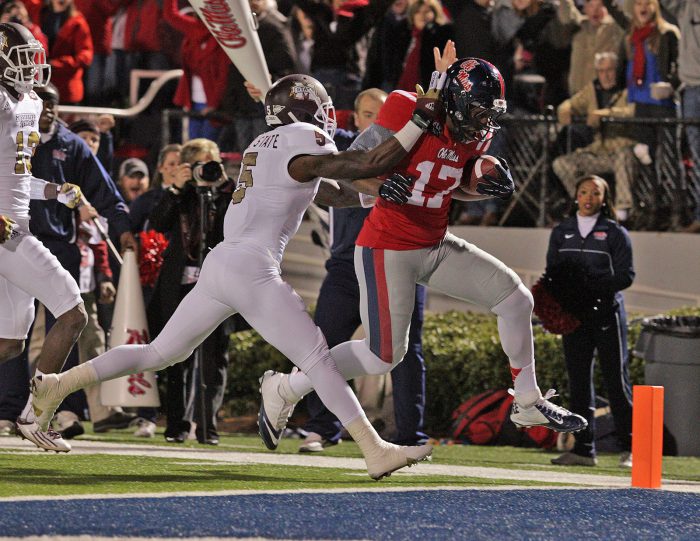 The rivalry between Michigan and Michigan State is one of the biggest in the Big Ten each season. These teams have played 107 times since 1898 and even though Michigan State has been winning more over the last few years, Michigan still dominates the all-time series 68-34-5. Michigan’s dominance has led to fans nicknaming Michigan State as “little brother,” which has not sat well with State fans. 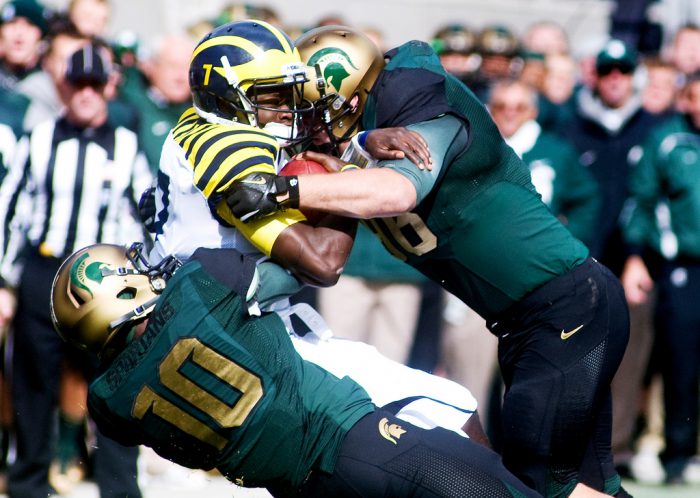 While the rivalry between Texas and A&M hasn’t been played since the Aggies moved to the SEC in 2012, there is still plenty of bad blood between these two. The rivals mention each other in their fight songs and the rivalry spawned the Hex Rivalry and Aggie Bonfire. 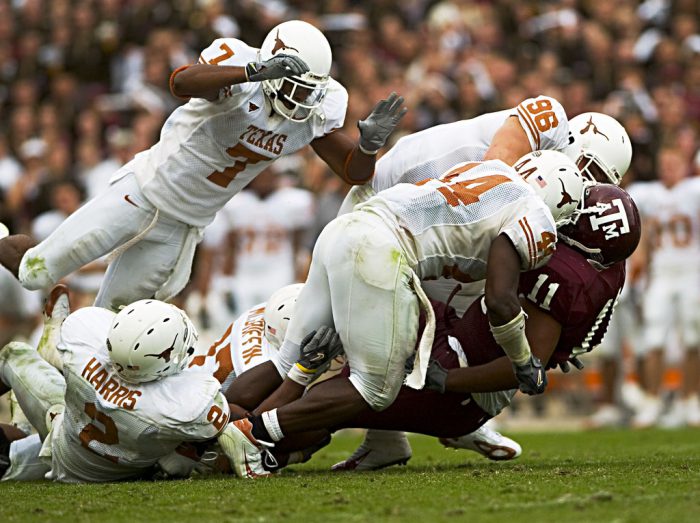 Unlike other college football rivalries the rivalry between Clemson and South Carolina runs much deeper than the gridiron. The two schools were founded 88 years apart as Clemson was founded in order to satisfy the agrarian movement’s request for more agricultural education after South Carolina refused to expand their agriculture program. On the field, the two teams play in the longest uninterrupted series, which dates back to 1896. 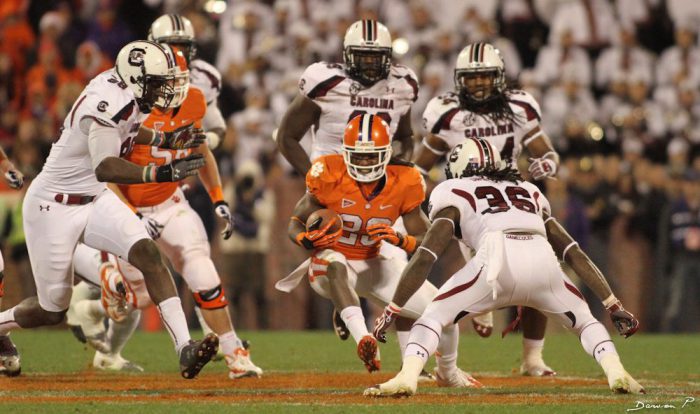 Georgia Tech and Georgia have a heated rivalry as the schools are separated by only 70 miles, but have very different cultures and academics. The culture clash between these schools leads to an intense rivalry on the field, which dates back to 1893. 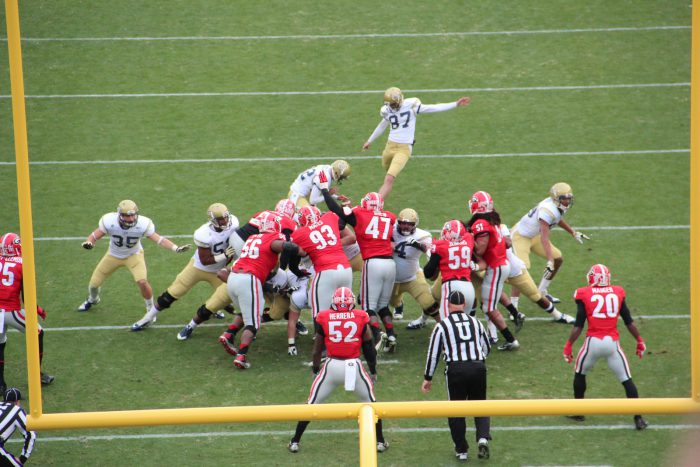 One of the best and most hard-fought rivalries in all of college sports is the rivalry between Auburn Tigers and the Alabama Crimson Tide. Both schools are some of the winningest programs in the history of college football and this game often determines the winner of the SEC West title. 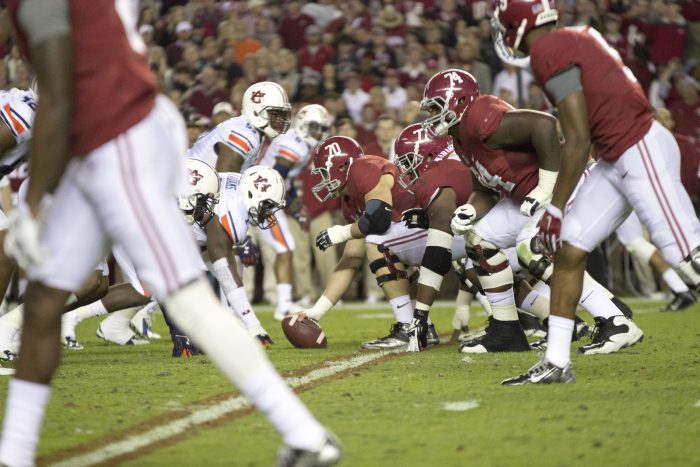