The Top Tailgates aren't always at the biggest schools. Here's the list of our top 25 at small schools!

It’s not just the fans of the teams from the major conferences who know how to tailgate. Fans of smaller programs know how to party too. These fans have just as much dedication to their team and throw their own amazing pregame parties. Here’s our list of the top 25 tailgate spots in the G5.

SMU fans don’t tailgate, they Boulevard. Bishop Boulevard on the SMU campus in Dallas is the pregame hub at SMU games. If you want to experience what it’s like to attend an SMU Mustangs game, then you need to stop by The Boulevard. 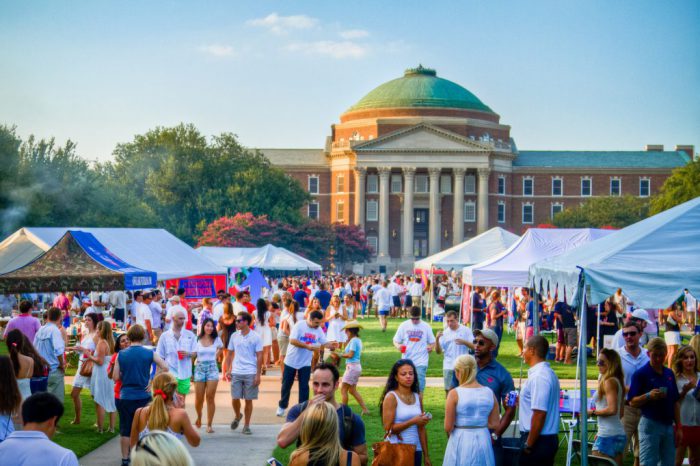 In recent years the Boise State Broncos have moved from another non-BCS conference team to one of the best teams in college football, and the tailgate atmosphere here have responded accordingly. Here at Boise State, you’ll find everything you’re looking for in a tailgate experience from tricked out tailgate vehicles to lavish spreads to a team walk they’ve got it all. 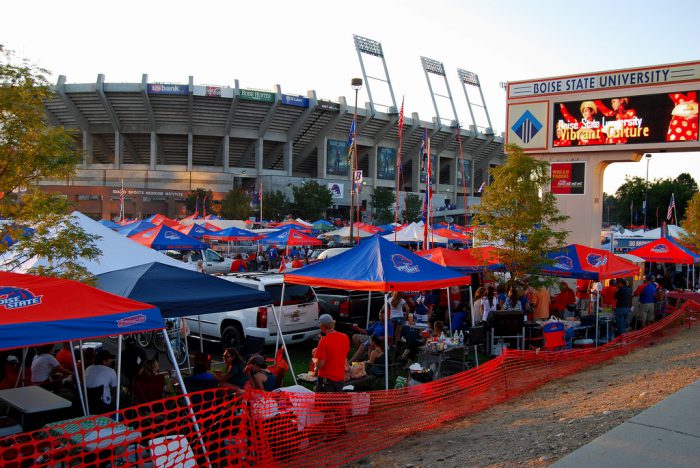 Tailgating at Southern Miss is one of a kind. Southern Miss fans have created a tailgating rivalry with their instate neighbors to show that you don’t have to be in a power conference to put on a great pre-game party. Many tailgaters drive in from hours away a  day before kickoff to set up a full gameday site including grills, TVs, and sometimes even come in RVs. 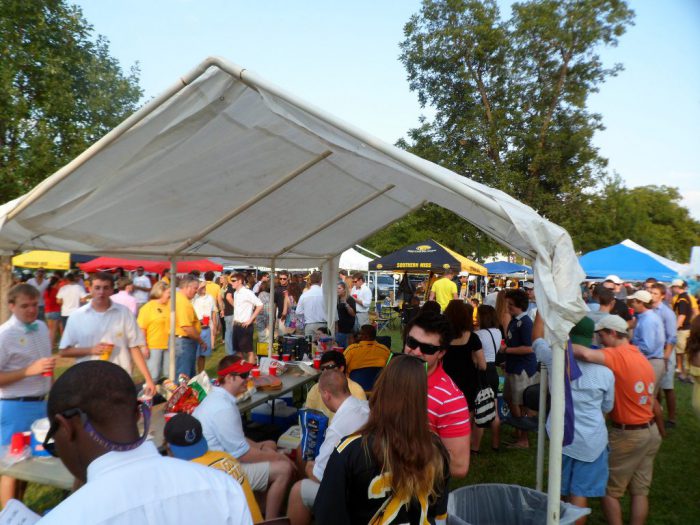 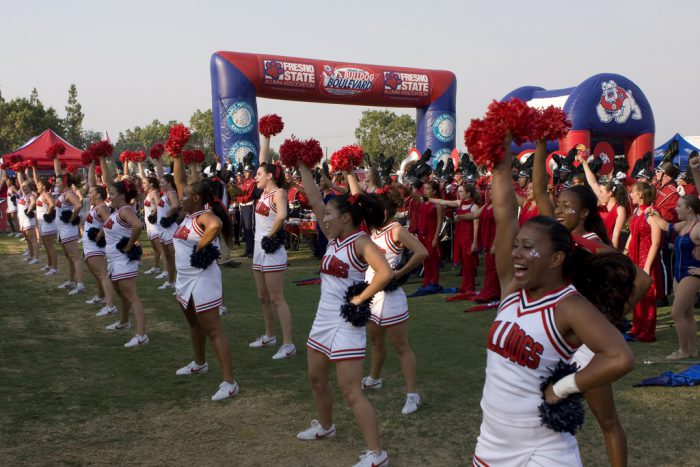 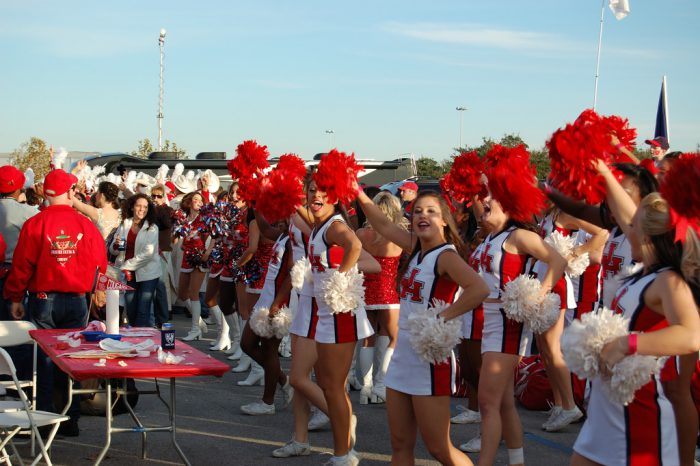 Tailgating is a big part of the gameday experience at New Mexico, and as a result, fans will get to the stadium six hours before kickoff. Once you arrive at the stadium, you’ll see a sea of people dressed in red and black ready to get wild before watching the Lobos take the field. 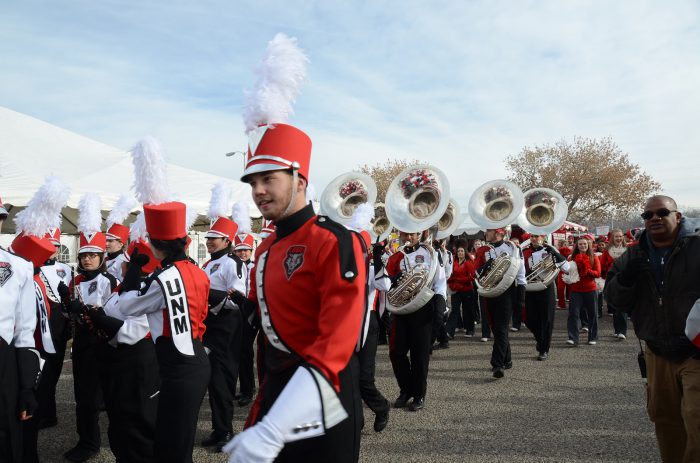 Tailgating is alive and well at Cincinnati where you’ll find a bevy of tailgate options that will satisfy any die-hard tailgater. Here at Cincinnati, you’ll find not only an on-campus tailgate area known as The GRID, but you’ll also find that multiple block parties are going on around the campus on gameday that you can join in on. 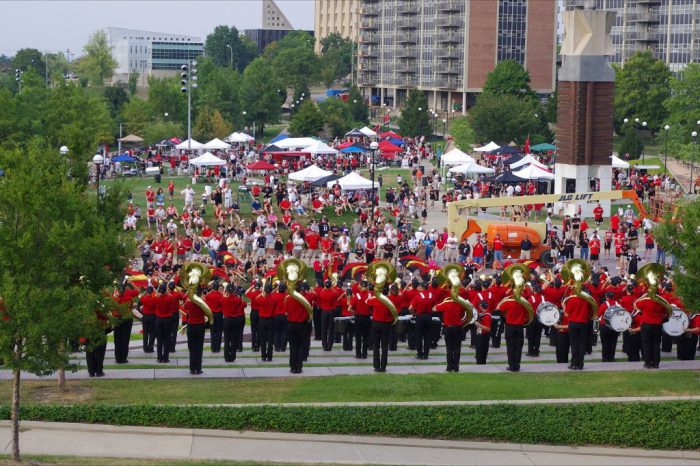 The atmosphere for tailgating at Marshall is just electric. The town is flooded with green making it looks like St. Patrick’s day in the streets.  The tailgate will get you ripped and roaring as fast as the blink of an eye; it doesn’t matter if you are even near the stadium you’ll find groups of people having a great time all throughout Huntington on game days. 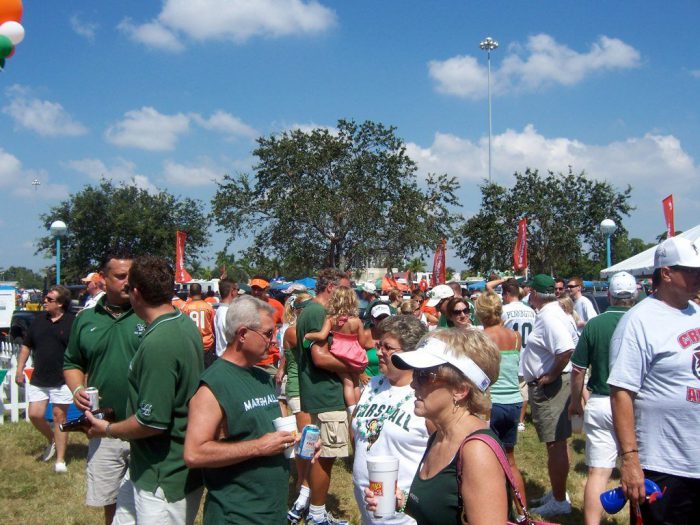 UCF is one of the largest universities in the country, and as a result, it has one of the biggest and best tailgates in the country. The fans here are pretty diehard when it comes to cheering on their Knights and they love to tailgate and let loose before watching the Knights take the field. 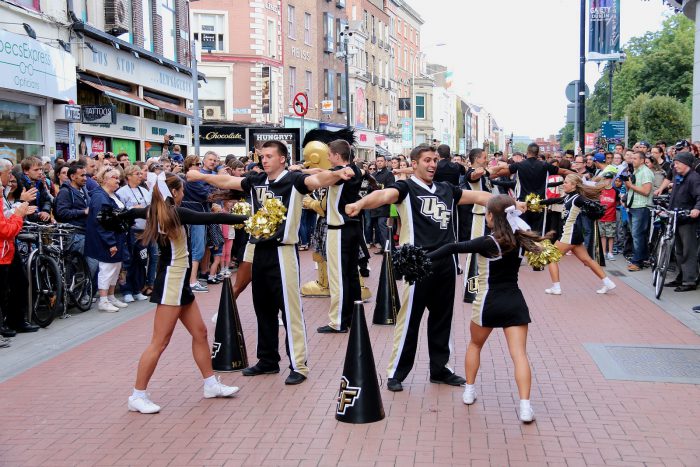 The entire town comes out for UTEP football games, as is tradition throughout the state of Texas where regardless of the level of play everyone has football fever. Every small town shuts down to support their local team, and El Paso is no exception. Local pride is instilled throughout the fan base, and you’ll find that these fans have an undying support for their Miners. 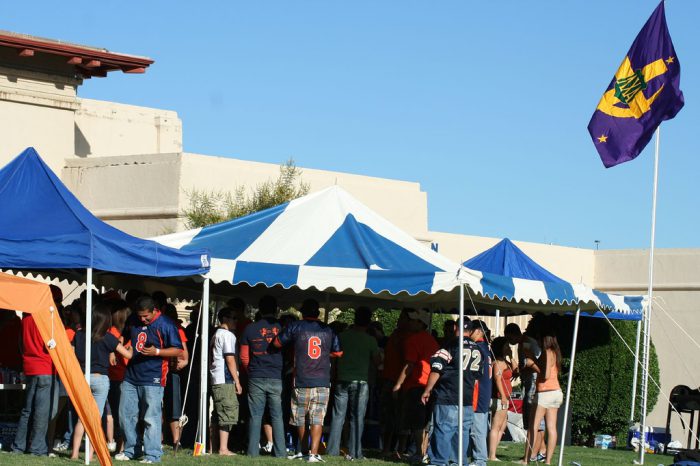 Tailgating at East Carolina University is a game day must if you want to get the most out your trip to Greenville. Every diehard Pirates fan will be found in the parking lots of Dowdy-Ficklin Stadium grilling, drinking, and getting ready for a great day of Pirates football! You can’t drive down the street in Greenville without seeing some enthusiastic Pirates fans, as everyone goes all out on game day to show off their Pirates pride. 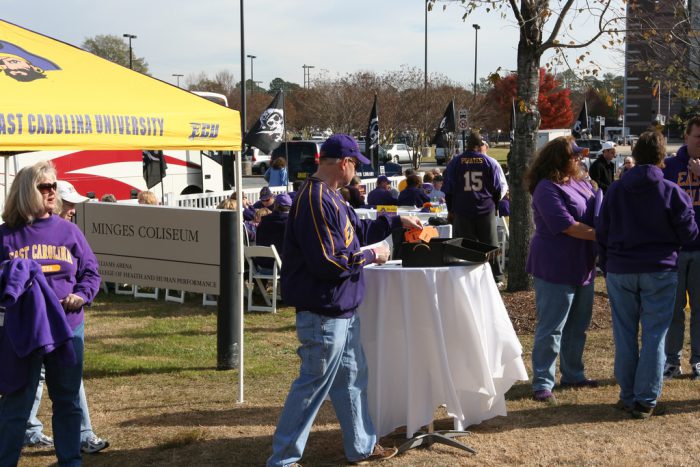 WMU has some of the loosest tailgating rules in the NCAA which turns the entire campus into one giant party on game day. The rowdy party atmosphere here isn’t just confined to the students. The alumni, parents, and locals all come out to party hard before cheering on the Broncos creating one of the craziest game day atmospheres not only in the MAC but the entire Midwest. 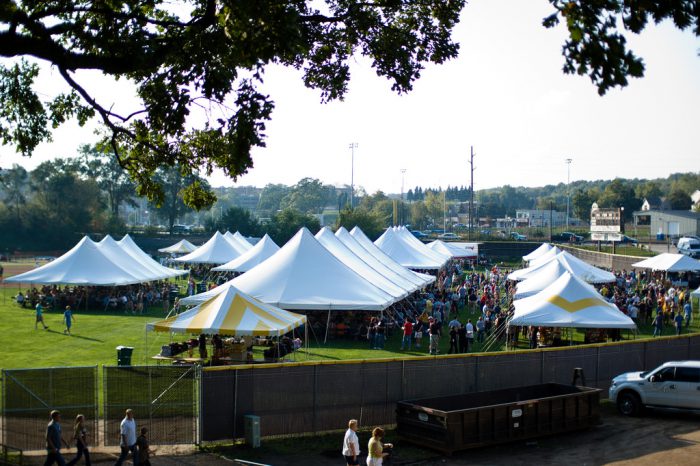 Football has returned to campus at Tulane with the opening of Yulman Stadium in 2014, which means that tailgating has also returned to Tulane’s campus. Tailgating is back at Tulane and is bigger than ever as Tailgate Village provides a tailgate experience similar to The Grove, but on a smaller scale. 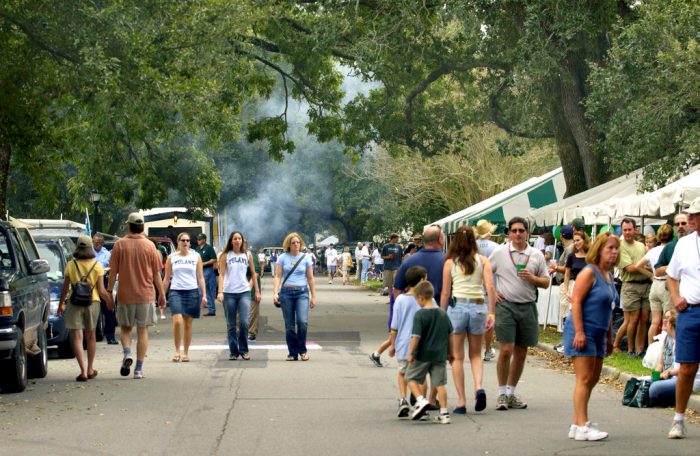 Appalachian State’s rural location means that a Mountaineers football game is the hottest party in town. Students hear start tailgating at the crack of dawn, which features a delicious spread of beer and food. 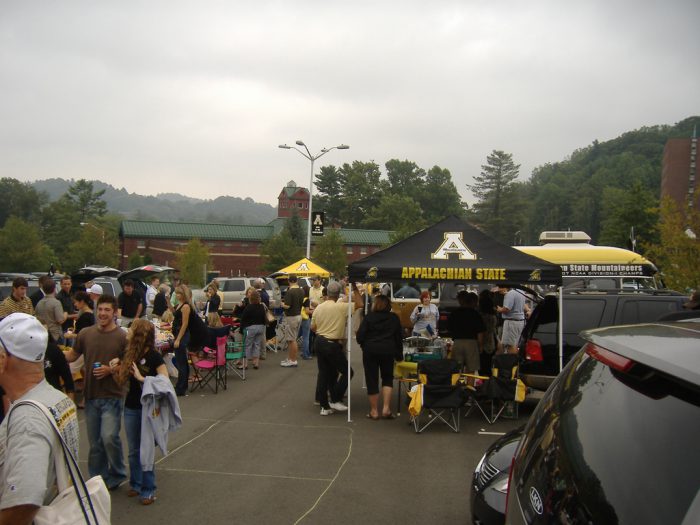 The Army campus in West Point, New York is gorgeous and provides a great place to tailgate. The fact Army is a military service academy means there’s lots of camaraderie between the fans and even visiting fans are welcomed with open arms.  If you’re looking for a fun and friendly tailgate, look no further than an Army tailgate at West Point. 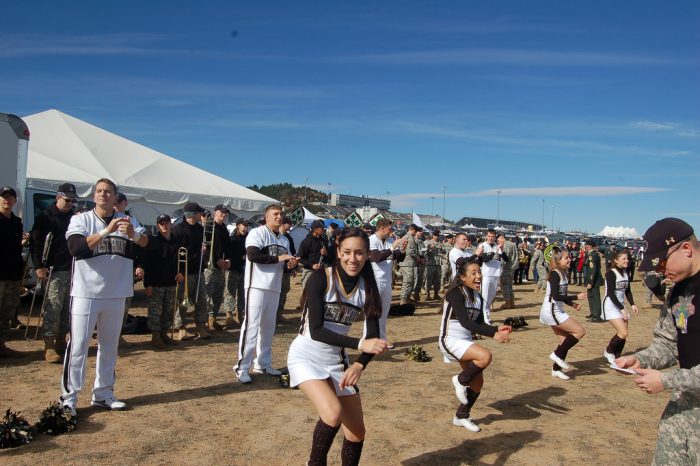 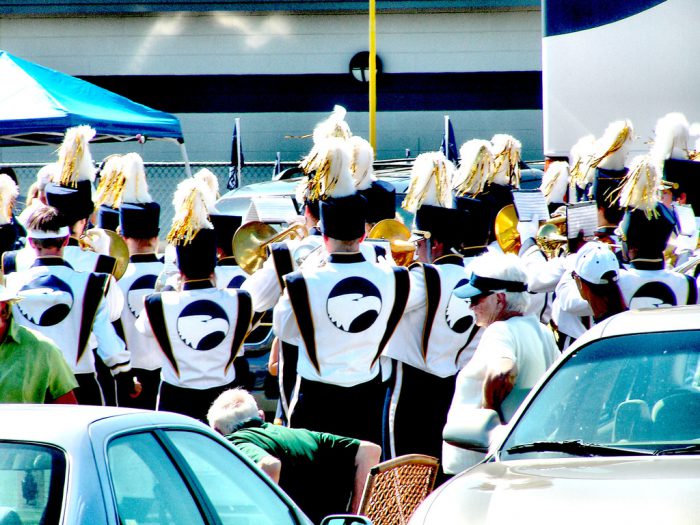 Rockets fans come out in full force to tailgate at the Glass Bowl before the game. Everywhere you look, you’ll see a sea of blue and gold. Everyone and everything will be covered in Toledo blue and gold. Fans from all over the state come in to see the Rockets strive for another winning season by driving up in their RV’s and special party vans. 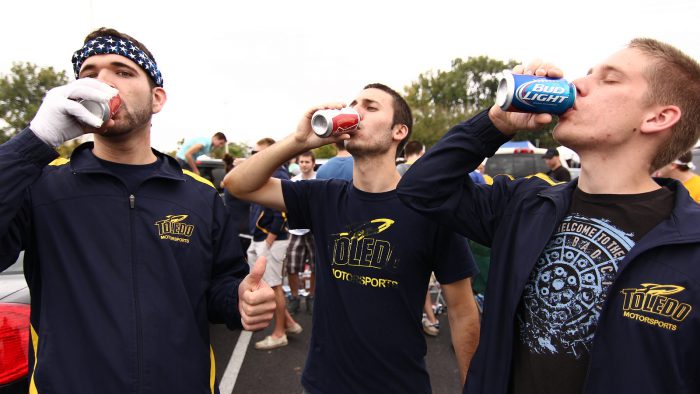 Central Michigan is home to one of the biggest tailgate parties in all of college football. The students here deem their pregame parties “The End of the World” because they party like the world is ending. There is no limit to what you’ll find, see, eat, drink, or dance to at a CMU pre game party. 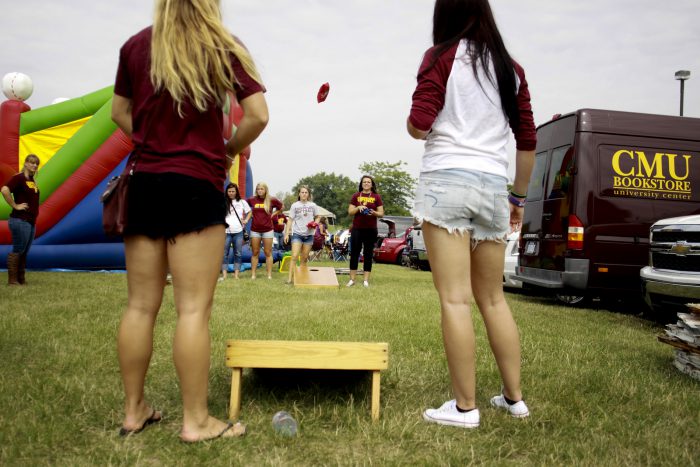 A lot of San Jose State fans particularly the students like to go hard at the tailgate. You’ll find a lot of drinking games and even may seem some keg stands when in San Jose, so come prepared to party hard and let loose before going into Spartan Stadium to cheer on the Spartans. 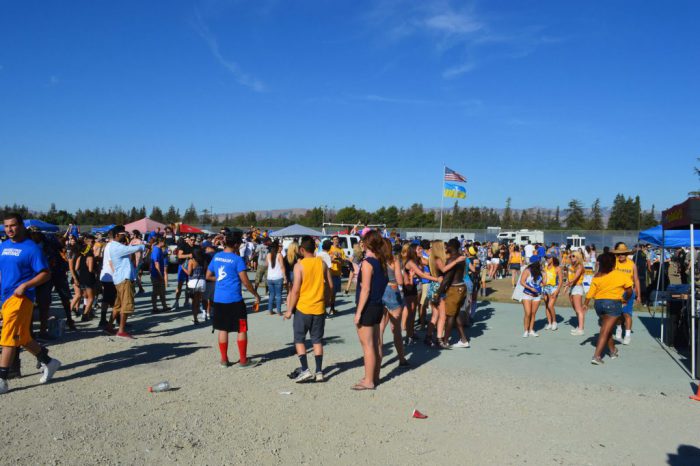 UTSA is a relatively new football program, but the tailgate scene outside of the Alamodome has already started to grow into one you wouldn’t want to miss. The Alamodome has an official capacity over 65,000 with limited parking, but fans still find room to tailgate. 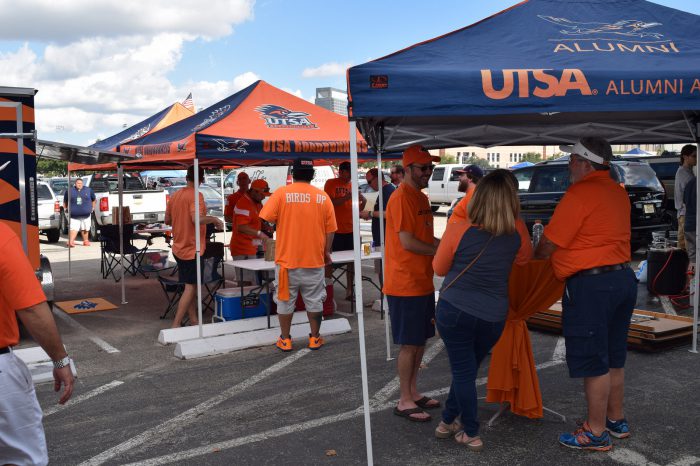 If partying is your thing, then look no further than the student tailgate here at Arkansas State University. The student tailgate takes place in the grove to the east of the stadium, which offers plenty of shade to help you beat the heat during early September games. 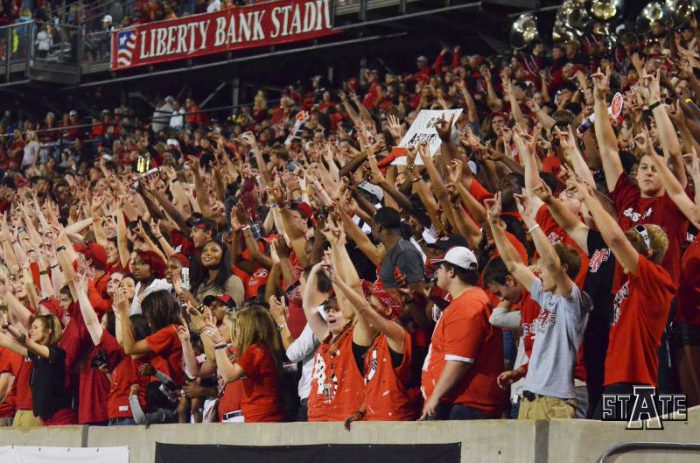 When tailgating at Northern Illinois, make sure to get there early for the tailgate, as the lots open 5 hours before kickoff. Huskie fans love to tailgate and getting to the game early ensures you’ll be able to take part in all the fun and exciting pre-game festivities NIU has to offer. 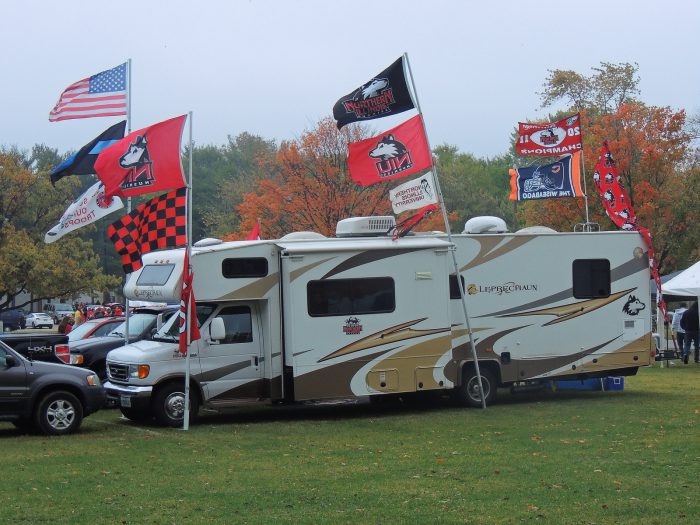 Tailgating is taken quite seriously at Navy as tailgates start as early as 7:00 am and go until kickoff. Navy tailgates are famous for the large variety of foods that can be found here. They’ve got everything from your traditional burgers and hot dogs to barbecue ribs to crab. 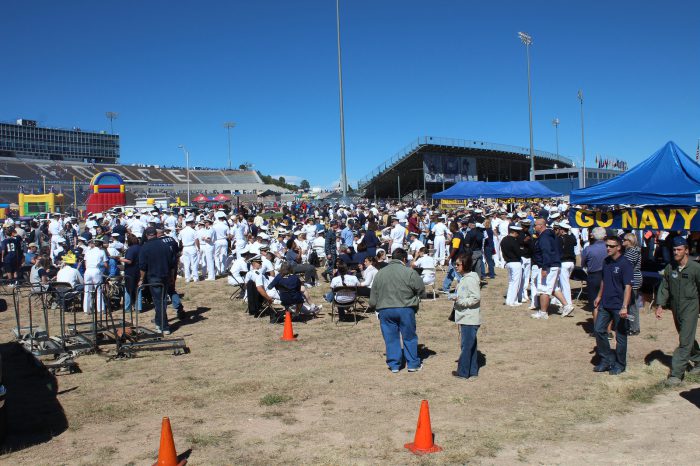 Tailgating is not only permitted at all the parking lots around Wyoming’s War Memorial Stadium; it is encouraged. There is plenty of tailgating to be had at Wyoming as the fans come out in high numbers to party before the game and support their team. You’ll find Cowboys fans come from all over the state to see Wyoming football games in Laramie. 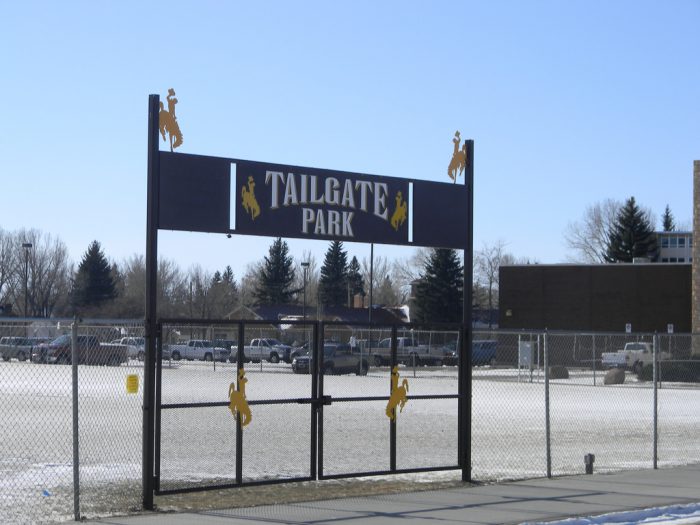 FAU offers fans some of the best weather in the all the country helping to ensure that you’ll have a great time when tailgating at FAU. The fans here at FAU take tailgating seriously, particularly for a smaller school. Not only does FAU have a dedicated student tailgate area known as the Rat’s Mouth, but they also have plenty of traditions that show off their Owls pride. 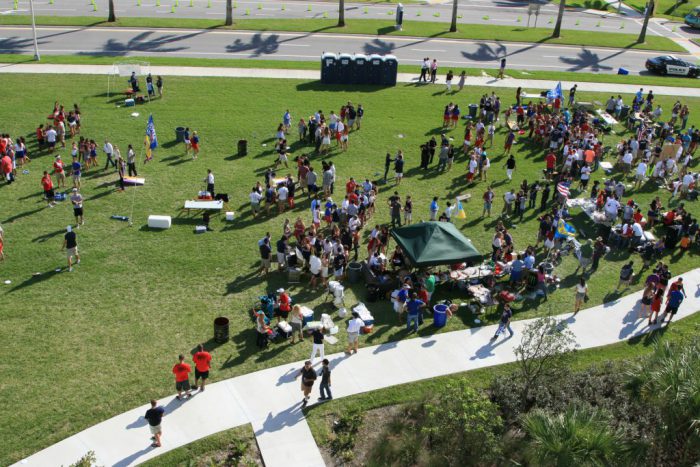